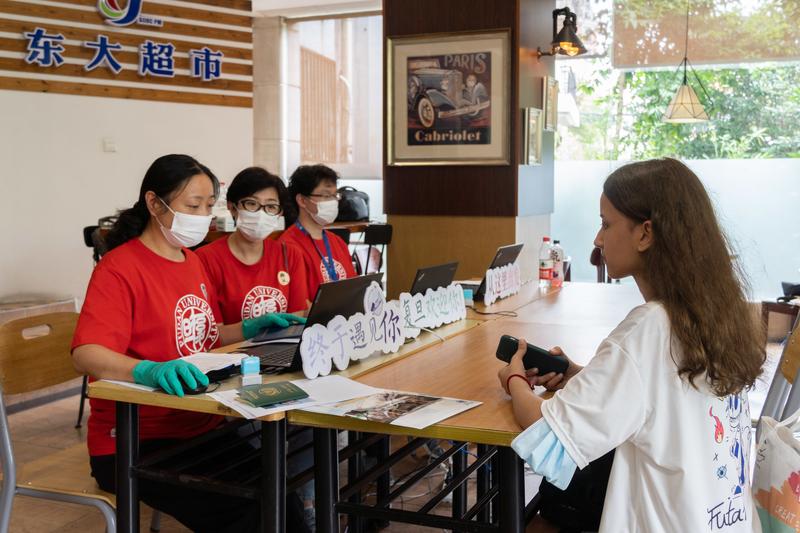 Pakistani Sabrina Shah Kazmi, 18, arrives at Shanghai's Fudan University on Sept 5 as the school welcomes a new batch of undergraduate and graduate students from 72 countries and regions. (YANG HONG / FOR CHINA DAILY)

Sabrina Shah Kazmi arrived at Shanghai's Fudan University on Sept 5 and got one step closer to her dream of becoming a doctor.

Kazmi, an 18-year-old Pakistani girl born in Changchun city, Northeast China's Jilin province, is among the 949 undergraduate and graduate students from 72 countries and regions who have enrolled in the Shanghai university for the new school year. She majors in clinical medicine.

Because of the ongoing pandemic, however, only 200 of these students have been able to make it to the campus. The rest will undertake lessons online, the school said.

Kazmi, who speaks perfect Mandarin, says her friends have always described her as a woman "with a foreign appearance but a Chinese heart".

"I grew up no different from any local child in the neighborhood. Very often I regard myself as a local," says Kazmi, who relocated to Shenyang city, Liaoning province, also in Northeast China, when she was 3 years old.

"I support the values of Chinese society and hope that I can contribute to the development of China," she adds.

Kazmi says her parents moved to China because of a job opportunity. Her father works as a language teacher. 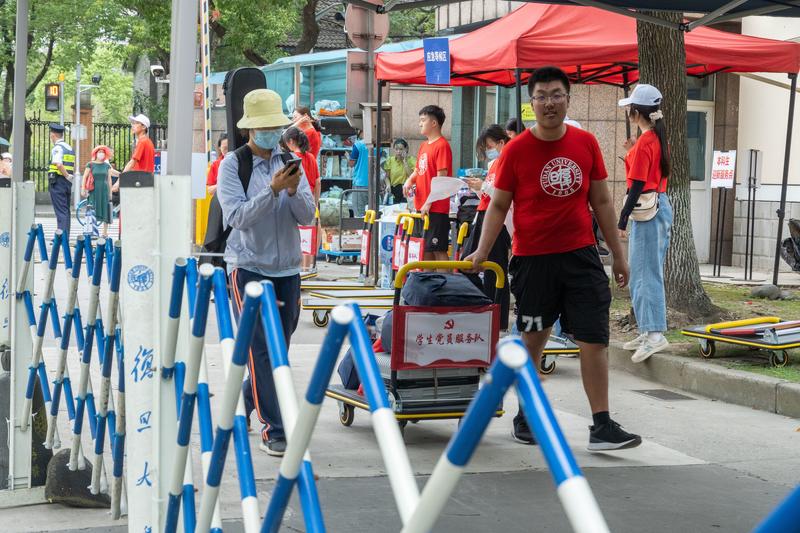 Fudan University students help the freshmen deliver their luggage with carts upon their arrival on campus. (YANG HONG / FOR CHINA DAILY)

Kazmi recalls that her family got along well with Chinese neighbors. "Very often our neighbors would give my younger sister and me some food that they cooked, and my mother would share with them our Pakistani dishes. I grew up eating dongbei (Northeast China) cuisines and I love them," she says.

"Even our family name in Chinese takes after that of a neighbor's as they offered great help to my parents when they first arrived and when my mother was pregnant with me."

Her aspiration to become a medical worker became clear in the first year of senior high school. "My aunt is a gynecologist back in Pakistan and, during family reunions, I was always amazed at her career experience of helping and healing people," she says.

Kazmi, who went to Shenyang No 2 High School, a top senior middle school in the province, says she appreciates China's dedication to providing a basic education for its population.

"In China, all families pay close attention to their children's education. If I had received education in Pakistan, I'm not sure I'd qualify academically to become a doctor," says Kazmi, who also enjoys volleyball, skating and hip-hop dancing.

Another foreign student in the new cohort is Kim Seong-eun from South Korea. After graduating from a high school in Harbin city, Heilongjiang province in Northeast China, Kim returned to her home in Gyeonggi province for two months before the new school year started. 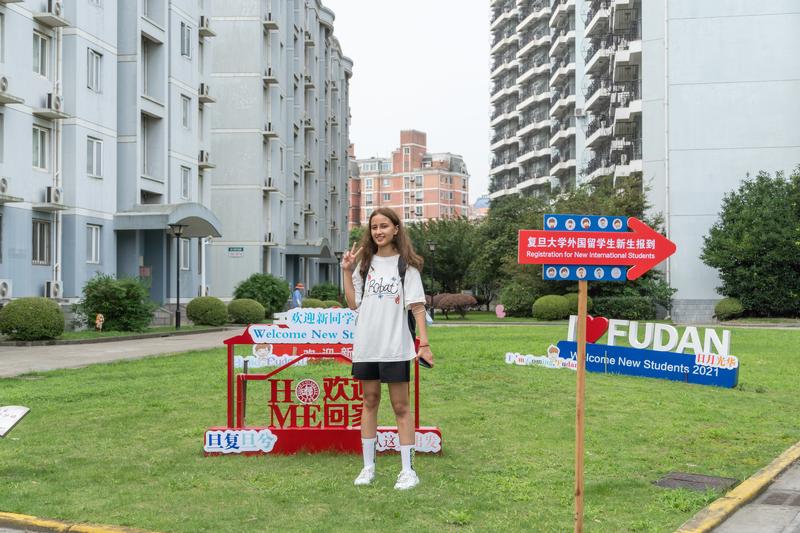 Kazmi poses in front of her dormitory. (YANG HONG / FOR CHINA DAILY)

Majoring in international relations, she says Shanghai is an influential trade center and many people from around the globe gather in the city for business and living.

"I'm convinced that I'll learn a lot at Fudan and build up my skill set for the future. I hope that I'll work for an international organization and work around the world," says the 19-year-old, who began studying in Harbin in 2016.

Kim says she was influenced by her mother, a Chinese culture enthusiast, to learn more about China. Before going to school in Harbin, she had the opportunity to travel to many parts of China, including Shanghai, Beijing and Suzhou, with her mother.

Around 7,000 international students attend Fudan University for short-term and long-term education each year, and the number has remained nearly the same despite the pandemic, though many are now doing so remotely, rather than in person, according to the Fudan University International Students Office.

A teacher from the office surnamed Liu says they have come across several newly enrolled students whose parents are alumni of Fudan.

"One of our alumni later became the chairman of the Nepal-China Friendship Association. Last year, his son became a freshman at Fudan," she says.