Restoration offers gateway to the past

Shanghai's largest heritage complex has reopened to the public, and despite the introduction of modern elements, the former residential compound retains much of its old charm, Lin Shujuan reports. 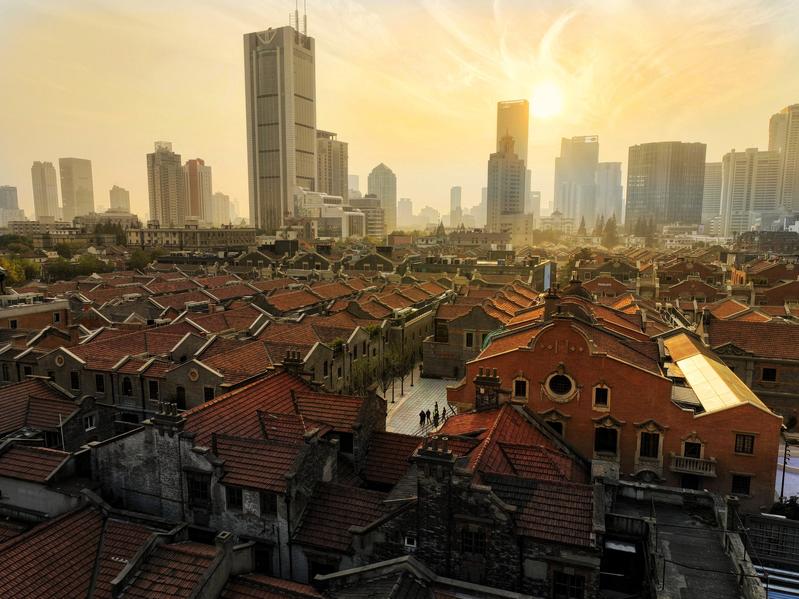 Built in 1882, Zhang Yuan became a residential compound in the 1920s. (XIAO MINGLIANG / FOR CHINA DAILY)

It has been more than three years since Huang Min, a 68-year-old Shanghai resident, got the chance to revisit her former residential compound Zhang Yuan, a community filled with hundreds of shikumen houses in downtown Shanghai's Jing'an district.

Located just off Nanjing Road West at the corner of Taixing Road and Wujiang Road, Zhang Yuan, or Zhang's Garden, is widely known as Shanghai's largest, best-preserved and most diverse shikumen compound.

It is really reassuring to see the western compound has retained its original layout.

In January 2019, after more than 1,100 families living in 170 units in the compound's 42 historical buildings were relocated, Zhang Yuan became the first urban renewal project in Shanghai to implement a protective expropriation plan.

The local government has since spared no effort in restoring the compound to its former glory.

After nearly four years of renovation, the western part of the compound, which consists of 16 buildings that currently serve as venues for international brands such as Louis Vuitton, Vacheron Constantin and Moet & Chandon, was reopened to the public on Thursday.

On Nov 25, Huang, a former resident who now lives in a neighborhood nearby, was invited to revisit the compound ahead of its reopening.

"Coming back here reminds me of my childhood when I used to jump rubber bands in the open space in front of this building," Huang says.

Huang talks in front of the building near the gate of Zhang Yuan on Weihai Road. The building now houses the largest flagship store of Vacheron Constantin in China. 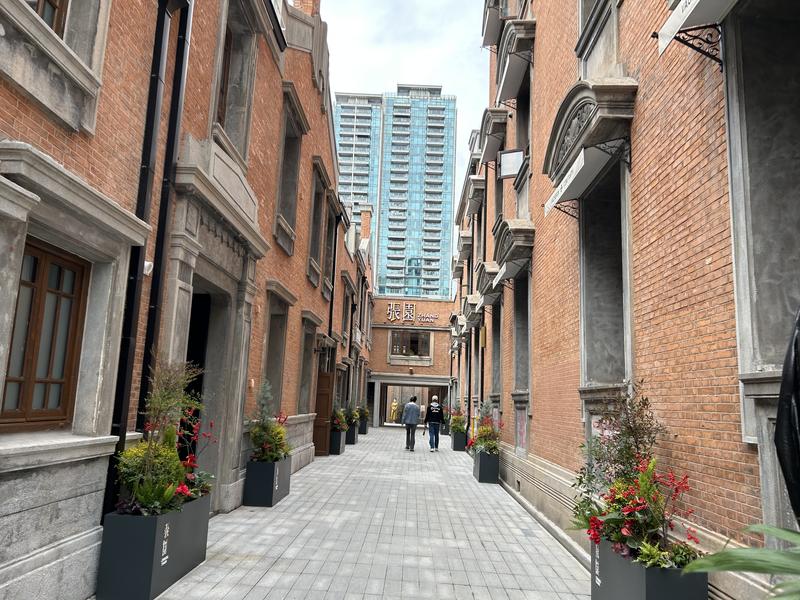 Pointing to a nearby three-story building which is still undergoing renovations, she says: "We used to live there."

Huang's family, which consists of six members across three generations, used to live in a tiny room measuring just 38 square meters. There were 11 other households residing in the three-story building.

Life back then was difficult as residents lived in cramped spaces and had to share the kitchen and toilets, she recalls. But despite the harsh living conditions, Zhang Yuan was always better known for being a landmark adorned with intricate carvings on its stone gates, elegant curves on staircase railings and doorknobs made of crystal.

The compound was built in 1882 by Zhang Shuhe (1850-1919), a merchant from Wuxi in Jiangsu province. Zhang had bought a piece of farmland in Shanghai from a Briton named Francis Groom before building a garden home for his mother.

Zhang opened the garden to the public after his mother's death in 1885 and later built a Western-style mansion called Arcadia Hall, a place where people could enjoy a wide view of Shanghai. He also expanded the garden space to more than 4 hectares.

With the introduction of entertainment options such as a roller-coaster, circus performances and pleasure boats, Zhang Yuan quickly became a well-known public space and one of the few private gardens that were open to the public in Shanghai. Its other amenities included a dance hall, a theater for Chinese opera, a photography studio, a teahouse and restaurants.

Before it became a residential compound in the 1920s, the location was dubbed "the No 1 public garden of Shanghai".

It was the place where the first electric lamp in China was lit, the first bicycle race in China took place, and where the country's first outdoor photo booth was opened. It was also the place where kung fu master Huo Yuanjia (1868-1910) challenged Western boxers so as to prove to the international community that Chinese were courageous fighters. Peking Opera maestro Mei Lanfang (1894-1961) also made his debut performance at a private event there. 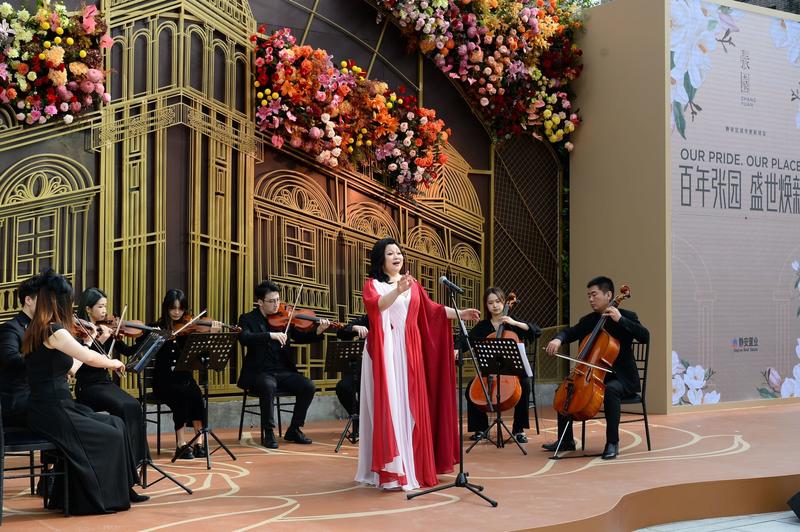 The reopening celebration of the residential compound held on Sunday. (XIAO MINGLIANG / FOR CHINA DAILY)

The compound was closed down in 1918 after a period of decline and its land was eventually sold when Zhang died a year later. The new owner divided the land into 28 blocks and resold them to different developers that built a series of shikumen, which literally means "stone-framed gate", an architecture style that first appeared in Shanghai in the 1860s.

After the founding of the People's Republic of China in 1949, most of these residential buildings became State-owned, and the city assigned up to 10 households to each building.

Huang Min used to live across the street of Zhang Yuan. In the 1990s, her family moved to the compound after their neighborhood was relocated. By that time, Zhang Yuan was akin to a slum that was overcrowded with people who did not have access to proper toilets.

To conserve the heritage of Shanghai and improve the living conditions, the municipal government decided to relocate all the residents in 2018 and protect the buildings, according to Shi Yunlun, president of the Jing'an Real Estate Group, the State-owned enterprise responsible for the conservation and restoration of Zhang Yuan.

"Zhang Yuan is the first urban renewal project in Shanghai to implement a protective expropriation plan," Shi says. "Maintaining the cultural heritage and characteristics of the shikumen houses has been the top priority of this project."

According to Shi, the company had in 2015 established a database for the 170 residential units in the compound. Each unit has its own file, which consists of information such as the original house plan, adaptations through the years, architecture details, images from former residents, as well as protection and control suggestions for subsequent protection, repair and utilization. The house file for some units exceeds 400 pages. 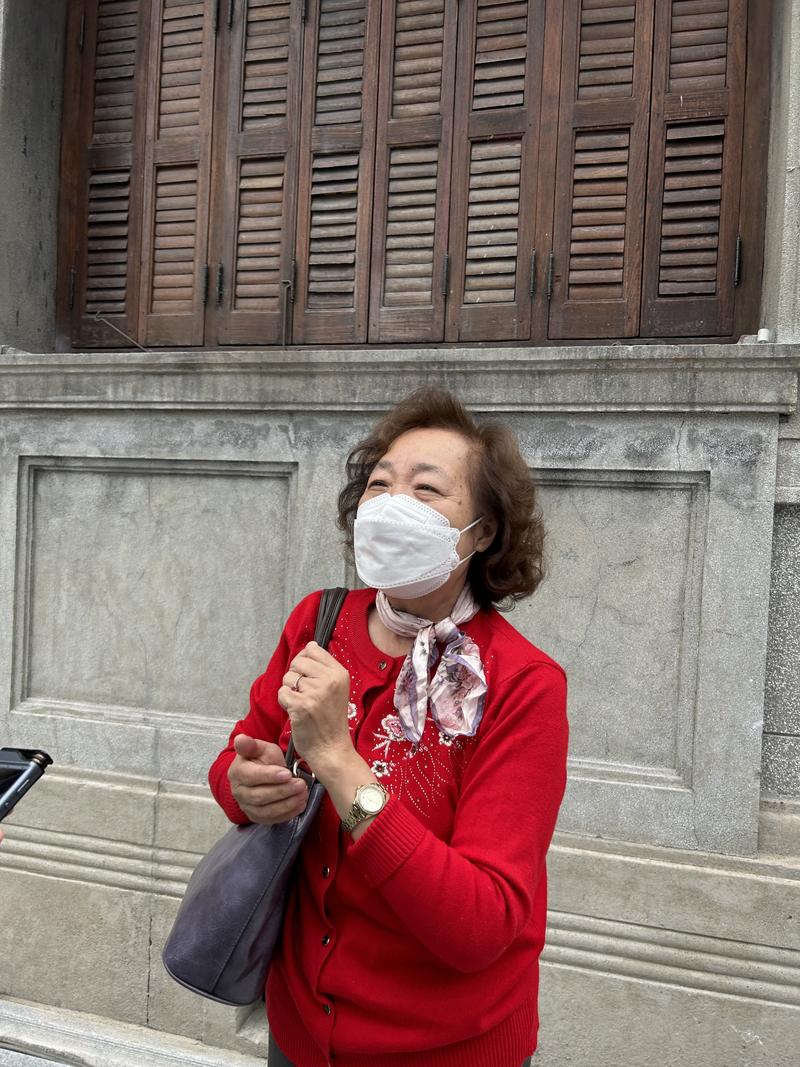 Huang Min, 68, a former resident of Zhang Yuan, is invited to revisit the compound before its reopening. (LIN SHUJUAN / CHINA DAILY)

The creation of this database took more than three years, making Zhang Yuan the first in the country to record housing data in such a comprehensive manner. This practice has since been adopted for all urban renewal projects in Shanghai.

According to Shi, preserving the integrity of the architecture and even its fixtures was of the utmost importance.

"From the bricks to the tiles to the doors to even the mottled traces on the walls of the buildings, the renovation team tried their best to preserve or restore as much as possible," Shi says.

"But the buildings will ultimately be lifeless if they were just being restored and not utilized," Shi adds. "This is why we hope to inject new vitality to the compound and turn it into a new cultural landmark, open space and name card of the city."

According to the district's plans, all the houses in the compound will be restored and refurbished. Furthermore, underground spaces will be constructed, and a commercial compound spanning more than 150,000 square meters, along with a gallery, a boutique hotel and a high-end office compound, will be introduced.

"Zhang Yuan is set to become a place that offers modern amenities while allowing residents to reminisce about Shanghai's past," says Mo Liangjin, director of the publicity department of Jing'an district.

Huang Min says she could not wait to see how the building she used to live in now looks.

"It's really reassuring to see that the western compound has retained its original layout," Huang Min says.

"They have even left the nail holes on these wooden windows intact. They look exactly like how they used to," she says, referring to the windows of the building. "It is nice that they have retained these little details, many of which are etched in our memories."

Zhang Lin contributed to the story.