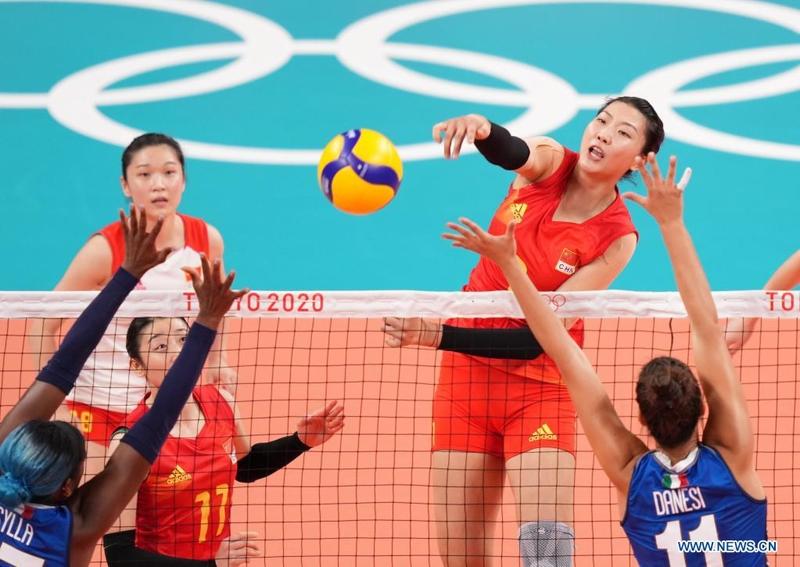 Yuan Xinyue (top) of China spikes the ball during the women's volleyball preliminary round match between China and Italy at Tokyo 2020 Olympic Games in Tokyo, Japan on July 31, 2021. (YANG SHIYAO / XINHUA)

BEIJING - China on Friday finalized its 14-strong roster for the 2022 FIVB Women's Volleyball World Championship, with eight players as well as head coach Cai Bin set to make their debuts at the worlds.

Veteran Yuan Xinyue will make her third appearance, but Zhu Ting and Zhang Changning are absent from the squad due to injury.

The Women's World Championship will take place from September 23 to October 15 in the Netherlands and Poland. According to the Chinese Volleyball Association, the team arrived on September 18 in Arnhem, the Netherlands, where they will play their Group D matches against Brazil, Japan, Colombia, Argentina and the Czech Republic.

"We are facing tough opponents across a long schedule at the World Championship. We will prepare ourselves for difficulties and give our all in every match. Our goal is to achieve satisfying results and win glory for our country," said coach Cai.

China will play its opening game against Argentina on Sunday.