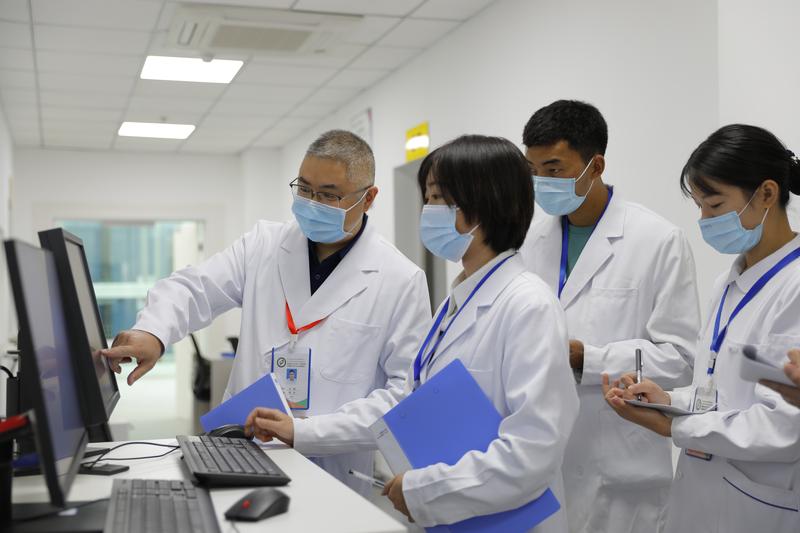 Wang Qiu (first from left), a veteran doctor and a department director from the West China Second University Hospital, Sichuan University, checks an ultrasound reading at the regional hospital for women and children in Lhasa, the Tibet autonomous region. (PHOTO PROVIDED TO CHINA DAILY)

From above, the regional hospital for women and children in the Tibet autonomous region looks like the flowing hada, a white ethnic scarf that represents purity, honesty and good tidings. These are qualities this first-of-its-kind institution aims to achieve with active cooperation from experienced medical staff from outside.

Wang Qiu has had many unforgettable moments since he left home and came to Lhasa to join the hospital about a year ago. The doctor in his early 40s was caught off guard by altitude sickness as soon as he landed in the regional capital with his co-workers in late October.

We plan to integrate some key disciplines here to promote implementation of internet-based management of maternal and child health.

"Some of us could barely sleep for the first few days owing to breathing difficulties," recalls Wang, who has 17 years of experience in medicine for children and has worked as deputy director of the rehabilitation department of the West China Second University Hospital, Sichuan University, in Chengdu, the capital of Southwest China's Sichuan province.

Many of them had to wear a nasal catheter in order to breathe without distress, but the tube came off every time they turned in their sleep. "So, lack of oxygen jolted you out of slumber. You had to fumble around in the dark for the catheter, find it somewhere under the sheet or on the floor, plug it back in and then try to sleep again," he says.

In August last year, the Tibet autonomous region and the Chengdu hospital inked an agreement on establishing a state-of-the-art healthcare hub for women and children in Lhasa. Wang, who often treated Tibetan children in Chengdu, was made the director of the new hospital.

"I have always been keen on child rehabilitation and development in Tibet," the doctor says. "In most cases I encountered while at Chengdu, critically ill children from Tibet missed what we medically refer to as the 'best treatment period', when medicines are likely to be more effective, because they had to travel to nearby provinces for proper medical attention. The delay usually led to poor prognosis."

Wang believes child medicine development in Tibet still has a long way to go in terms of disease screening, early diagnosis and medical services, but the regional hospital is definitely a step in the right direction. "Our first task, therefore, has been to promote pediatric specialties. We plan to gradually turn the hospital into an integrated healthcare hub for both women and children," he says. 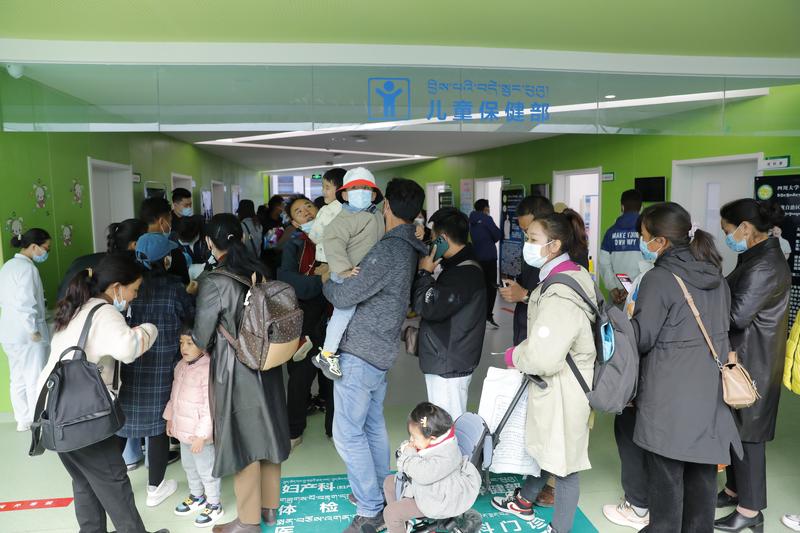 So far, the hospital has launched outpatient services, and set up nucleic acid testing and vaccination centers. Efforts have been stepped up to open inpatient pediatrics, gynecology, obstetrics and neonatal wards, in addition to operating theaters for delivering babies.

Since the Tibetan staff mostly comprises fresh graduates, many have been sent to the West China Second University Hospital for training across disciplines, including rehabilitation and pathology. "Our own team (from Chengdu) trains local doctors on a regular basis," Wang says.

The gaps in medical technology are steadily being narrowed, he says. "Over the next three to five years, we plan to integrate some key disciplines here to promote implementation of internet-based management of maternal and child health," he says.

There have been personal and professional challenges, but Wang and his team are taking it all in their stride. The doctor himself is on anti-hypertensive medication to prevent his blood pressure from flaring up every now and then. "My BP can shoot up to 160/120, which is not a good thing, especially when I am in the middle of a medical consultation. Hence, I take necessary precautions."

Language is also a barrier. Most patients hail from rural, farmers' families and speak only Tibetan. Wang and his team need an interpreter, usually a local colleague, round-the-clock. "We are taking language lessons too," he says.

In the face of adversities, positive feedback from local residents keeps the team going. Wang recalls a conversation with a taxi driver last year. He had asked to be dropped off at a point near the Lhasa cultural and sports center, fearing that the driver would not know about the new hospital. "I was pleasantly surprised when he actually took me to the hospital."

The driver continued to surprise Wang by mentioning that the country had invested more than 1 billion yuan ($141.80 million) to build the hospital and that doctors from Chengdu were coming to run it. "His enthusiasm was inspiring. It has been a constant reminder of the responsibilities we have toward women and children in the region."

The COVID-19 outbreak in Lhasa last month was one of the biggest challenges for Wang and his team. "The clinical lab had to run 24/7.The staff took no breaks and ensured patient care was not compromised," he says.

A view of the hospital. (PHOTO PROVIDED TO CHINA DAILY)

Wang is among the first batch of 13 doctors and medical management personnel from Sichuan to actually join the aid program in Tibet. "Conventionally, medical aid to Tibet was more like 'blood transfusion'. Experts stayed in Tibet for a year or two and then came back," says Liu Hanmin, director of the Chengdu hospital.

"Things are different now. It is more like 'making blood'. In other words, Tibet is receiving permanent medical technology and management from the West China Second University Hospital," Liu adds.

The long-term goal is to build a national regional medical center in the plateau to curb the high mortality rate among pregnant women, newborn babies and children under the age of 5.

"We have a deep understanding of the health issues plaguing women and children in Tibet because we have received many patients from the region over the years. We have also screened many for congenital heart disease and offered remote consultation. But these steps weren't enough," Liu says.

So, when the Tibetan authorities decided to build the first regional hospital for women and children in Lhasa in 2019, the Chengdu hospital went on board to offer "unprecedented bilateral cooperation".

Both sides agreed that advanced medical technology and management skills were required to efficiently run the new hospital, and it was decided that the Chengdu hospital would send a team of professionals to Lhasa.

The Chengdu hospital has sent more than 70 doctors and medical workers to Tibet. Long-term assistance can last for three years while short-term aid ranges from one to three months.

Liu says short-term aid is based on the hospital's immediate needs, which are usually nonmedical in nature. For example, logistics and purchase teams were sent to Tibet to streamline the respective networks.

The ultimate goal of long-term assistance, on the other hand, is to develop a system of women and child medicine development across the autonomous region. "We hope that one day the Lhasa hospital acts as the core of maternal and child health programs throughout Tibet," Liu says.

As a baby step, teams from the Chengdu hospital have started visiting various districts and counties in Tibet to offer medical consultation and guide research. "We are fully committed to the cause. The West China Second University Hospital will continue to aid the development of medical infrastructure and management in Tibet," Liu adds.