By ​Ma Zhenhuan in Hangzhou 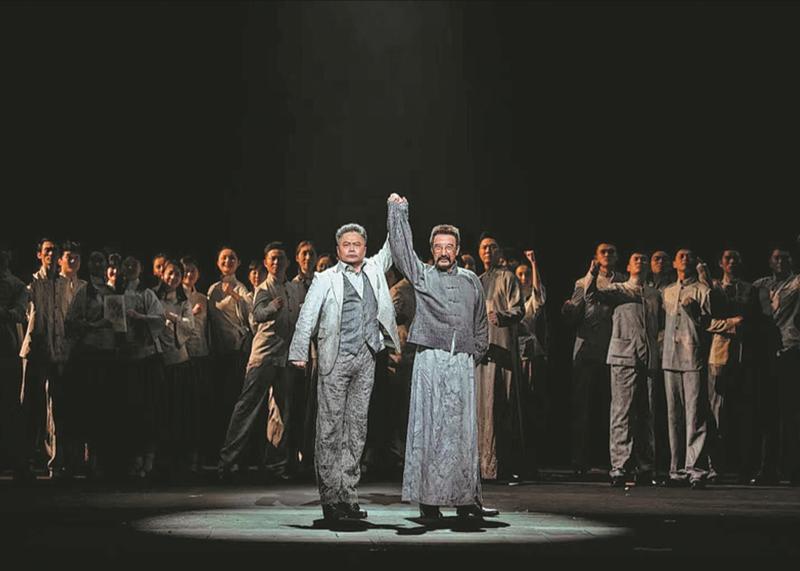 A scene from The Red Boat, an opera that depicts the Party's founding story with a focus on its first National Congress. It was staged recently in Hangzhou, Zhejiang province, and will tour nationwide. (PHOTO / CHINA DAILY)

A century ago, in 1921, the first National Congress of the Communist Party of China was concluded on a red boat on Nanhu Lake in Jiaxing city, Zhejiang province.

Today, a century later, an opera, The Red Boat, depicting the Party's founding story with a focus on that first, fateful gathering, was staged on Thursday and Friday in Hangzhou, capital of East China's Zhejiang province.

The two-hour opera, which made its debut at the Zhejiang Conservatory of Music, used more than 50 stage scenes to tell the story, which, according to the opera's chief director, Huang Dingshan, symbolizes the revolutionary spirit of the CPC.

Using 18 3-meter-wide by 10-meter-high wooden boards, onto which different scenes were projected, the audience was presented with vivid depictions that had a strong visual impact, according to Huang.

The opera involved a team of nearly 400 people, including more than 180 performers, who mainly came from the Zhejiang Conservatory of Music and the Zhejiang Song and Dance Theater.

Yang Xiaoyong, a professor at the Zhejiang Conservatory of Music, played Li Dazhao (1889-1927), a pioneer of China's Communist movement and one of the founding members of the CPC.

It is the first time for him to play such a role, Yang says. He undertook an in-depth study of historical documents in a bid to get better understanding of Li.

"Li Dazhao was a prudent person; therefore his actions and steps should be steady. I must maintain a very stable and powerful tone when singing to fit his characteristics," says Yang.

Echoing Yang, Wang Chuanliang, a teacher from the Guangzhou-based Xinghai Conservatory of Music, who starred as Chairman Mao Zedong, says that it was challenging for him to portray Mao. He adds that, when learning the history of Mao, he was moved by the spirit of sacrifice to accomplish a great undertaking.

"We started to work on the plot of the opera as early as in 2017, and the first edition was completed on Feb 11, 2019," says Wang Yong, scriptwriter of The Red Boat and head of the National Peking Opera Company, adding that the draft was revised 13 times before the final debut.

Wang says he visited Xingye Road in Shanghai and the Memorial Hall of Revolution at Nanhu Lake in Jiaxing many times as he was preparing the script. In addition, he also read various biographies and memoirs of Mao, Li, and other delegates to the congress 100 years ago.

"Last week, our institute organized a Party member visit to the Red Boat in Jiaxing. Today, we watched the opera The Red Boat, which gave us a better understanding of the history of the Party," says Lei Luyuan, an audience member who watched the opera with around 20 colleagues from a local electric power research institute. "The Red Boat not only improved our aesthetic knowledge but also strengthened our ideals and beliefs."

Cai Jingwen contributed to this story.