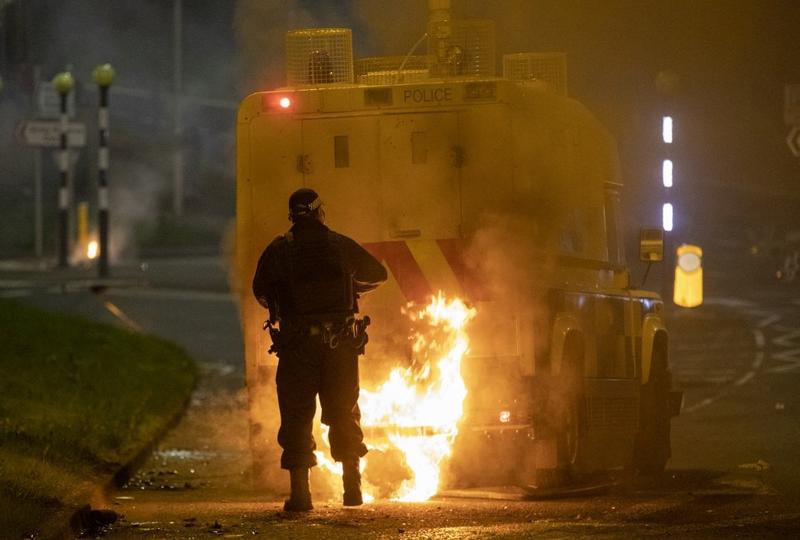 A police officer walks behind a police vehicle with flames leaping up the rear after violence broke out in Newtownabbey, north of Belfast, in Northern Ireland on April 3, 2021. (PAUL FAITH / AFP)

BELFAST - Northern Ireland’s devolved government will meet to be briefed on nightly outbreaks of street violence that escalated on Wednesday with sectarian clashes, continued attacks on police and the setting alight of a hijacked bus.

The violence comes amid growing frustration among many pro-British unionists at new post-Brexit trade barriers between Northern Ireland and the rest of the United Kingdom that many warned could be a trigger for violent protests.

British Prime Minister Boris Johnson said he was “deeply concerned” by the violence, which has injured dozens of police officers in recent days. His Irish counterpart, Micheál Martin, called on Dublin, London and all parties in Northern Ireland to work together to ease tensions and restore calm.

“Those involved in violence, criminal damage, manipulation of our young people and attacks on the police must stop,” O’Neill of the Irish nationalist Sinn Fein party said on Twitter later on Wednesday.

Crowds of youths in a pro-British area of Belfast set the hijacked bus on fire on a busy street at around 1800 GMT on Wednesday. The driver and passengers were unharmed.

The incident took place near one of Belfast’s so-called “peace walls” that divide some Irish nationalist and unionist communities. Large groups threw fireworks, bricks and petrol bombs at each other from either side of the large structure.

Parts of the region remain deeply split along sectarian lines, 23 years after a peace deal largely ended three decades of bloodshed. Many Catholic nationalists aspire to unification with Ireland while Protestant unionists want to stay in the UK.

While politicians from all sides condemned the clashes on Wednesday, Northern Ireland’s main governing parties blamed one other.

Sinn Fein and others have accused the Democratic Unionist Party (DUP) of First Minister Arlene Foster of stoking tensions with their staunch opposition to the new trading barriers that many unionists feel erases part of their identity.

The DUP in turn have pointed to a decision by police not to prosecute Irish nationalists Sinn Fein for a large funeral last year that broke COVID-19 regulations. They also called for Northern Ireland’s police chief to step down over the matter.