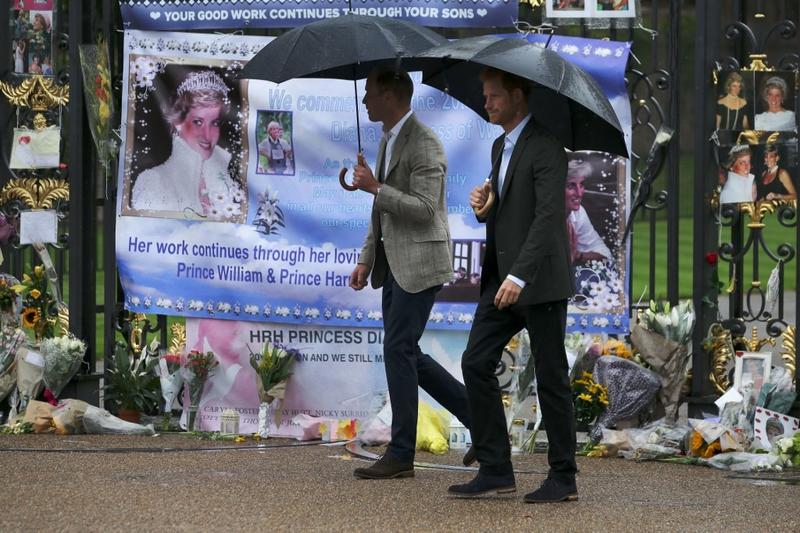 Britain's Prince William, Duke of Cambridge (center) and Britain's Prince Harry (right) leave after looking at tributes left by members of the public at one of the entrances of Kensington Palace to mark the coming 20th anniversary of the death of Diana, Princess of Wales, in London, on Aug 30, 2017. (DANIEL LEAL-OLIVAS / AFP)

LONDON  - Britain’s Prince Harry has joined his brother William in welcoming a new investigation into how the BBC secured a famous and controversial 1995 interview with their mother Princess Diana, with a source describing it as a “drive for truth”.

A former Supreme Court justice is leading a new inquiry into how the broadcaster obtained the interview and whether executives covered up any wrongdoing after accusations that the late princess was tricked into taking part.

Prince William, the second in line to the throne, said earlier this week that the investigation was a step in the right direction and a source close to Harry said on Saturday that the prince was getting regular updates.

The person familiar with the situation also questioned some British media reports which asked why Harry, living in California with his wife Meghan and son Archie, had not joined his brother in welcoming the investigation earlier.

“Sadly, some people are not just seeing this as a drive for truth, but also trying to use this as an opportunity to try to drive a wedge between the brothers,” the person said.

Diana’s Panorama interview with Martin Bashir was watched by more than 20 million viewers in Britain and became one of the defining moments of her failed marriage to Prince Charles.

It included an admission of an affair and the line that there “were three of us in this marriage”, referring to Charles’ relationship with his now second wife, Camilla Parker-Bowles.

This month, Diana’s brother Charles Spencer said the BBC had failed to apologize for what he said were forged documents and “other deceit” which led him to introduce Diana to Bashir.

ALSO READ: Prince William says Diana's death was 'pain like no other'

The BBC has said the broadcaster is determined to get to the truth about Spencer’s assertions and has appointed John Dyson, one of the country’s most senior retired judges, to lead the inquiry.

Bashir has made no public comment on the situation and the corporation says the journalist, who gained global renown from the interview, is currently on sick leave, recovering from heart surgery and from contracting COVID-19.

Harry and Meghan moved to California after stepping back from royal duties in January and have signed a multi-year production deal with Netflix as part of their plans to be more financially independent.

The source added that the couple had decided to share their property in England, Frogmore Cottage, with his cousin Eugenie but would stay there when they visit the UK.