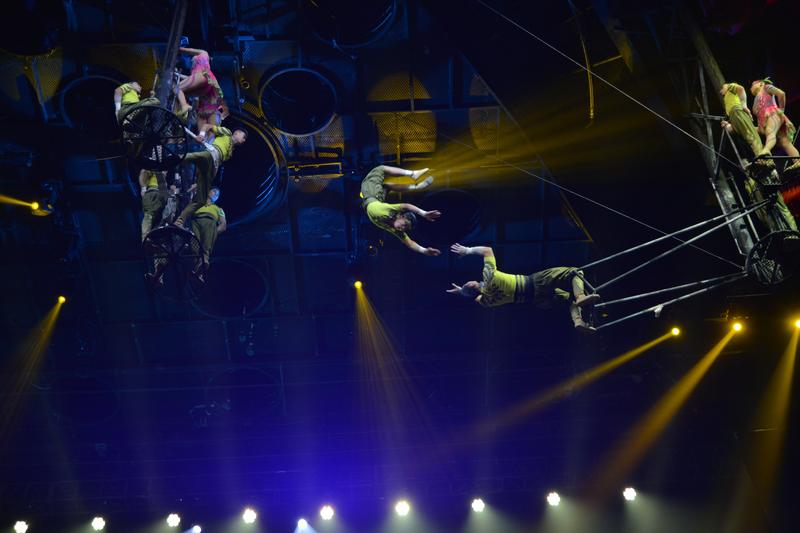 It was a moment that justified the audience holding their breath before issuing a collective gasp of astonishment as 21 acrobats flew through the air, 26 meters above the ground across a 16-meter span.

Some "flew" as soloists, performing three head-over-heel tumbles, while others "flew" as part of a duet, tumbling four-and-a-half times. They also performed aerial tricks and switched roles as "flyers" and "catchers". With feats of balance, strength, flexibility and daring, they offered the stunned audience death-defying acrobatic acts. This was a show with a built-in wow factor.

With new choreography, new music, new stories and new acrobats, we are glad to see that this old art is alive with creativity.

The show, Aerial Swing Trapeze Act, presented by the Henan Acrobatics Group and Puyang Acrobatic Art School, was named at the 11th China Acrobatics Golden Chrysanthemum Awards as one of the 10 best acrobatic shows.

Launched in 1997, the competition is held every three years and is the highest award for acrobatics in China. The competition selected and awarded the top 10 shows.

This year's competition was held in Puyang, Henan province, from Nov 9 to 11. Thirty acrobatic shows selected from 70 performances from around the country competed for the final top 10 awards.

"We prepared for more than a year for the competition," says show choreographer Zhu Lin, adding that the 21 acrobats, from 14 to 35 years old, were selected from about 200 candidates. "The new show featured some of the most difficult actions we've ever choreographed. We are very proud of our acrobats, who challenged themselves and did a great job." 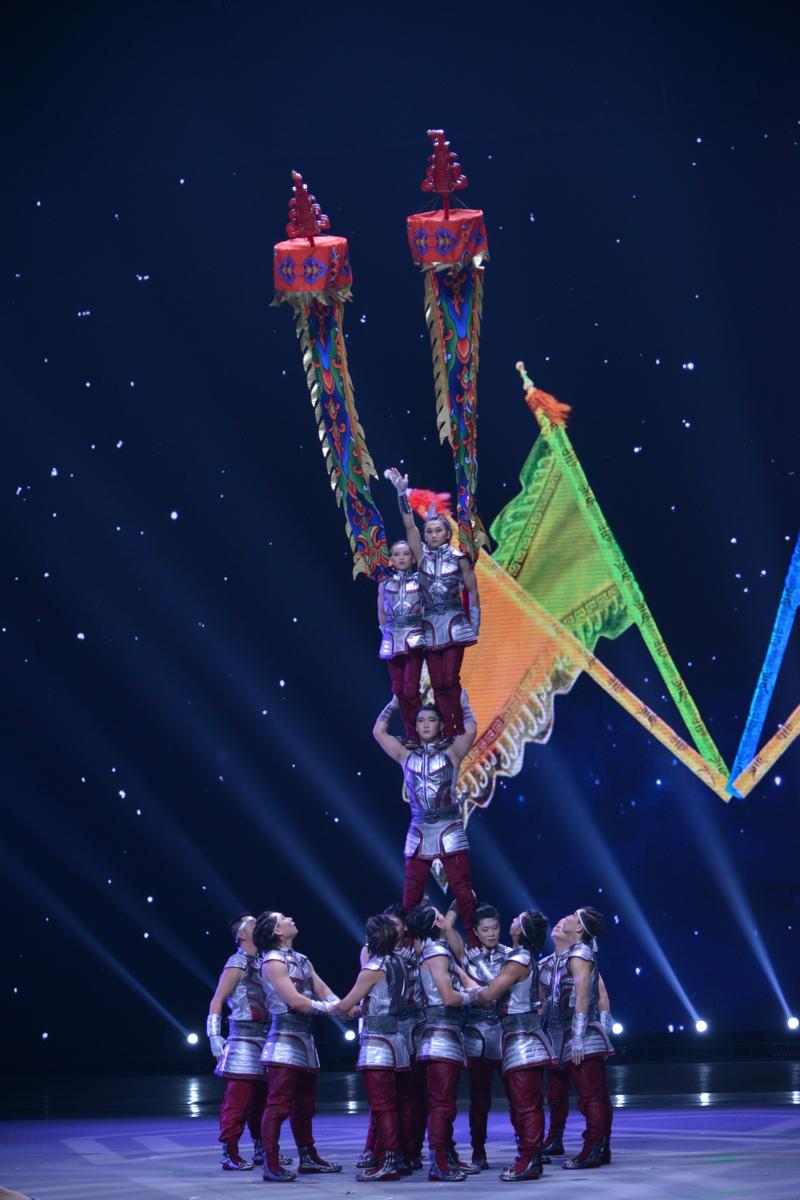 Zhu adds more intriguing details. "Flying and rotating in the air are among the most challenging acrobatic techniques. We have made some changes based on the traditional 'flying men' shows. For example, the poles reached out from the roof instead of standing on the floor. The safety net was controlled by computer, which only took one minute to open and close the net," says Zhu. The new show, she says, was inspired by eagles flying down the mountain cliff, "beautiful and full of courage".

Back in 2017, an acrobatic show choreographed by Zhu, combining trampoline and martial arts, also won the award during the 10th China Acrobatics Golden Chrysanthemum Awards. She says that the award-winning show toured nationwide and she hopes that the new show will also attract a large audience.

"Acrobatics has a long history in China. The art form is enjoyed by people of all ages and has been developed over the decades. Compared to older-generation acrobats, who took the job to make ends meet, today our acrobats are young and passionate about the art form," she says. 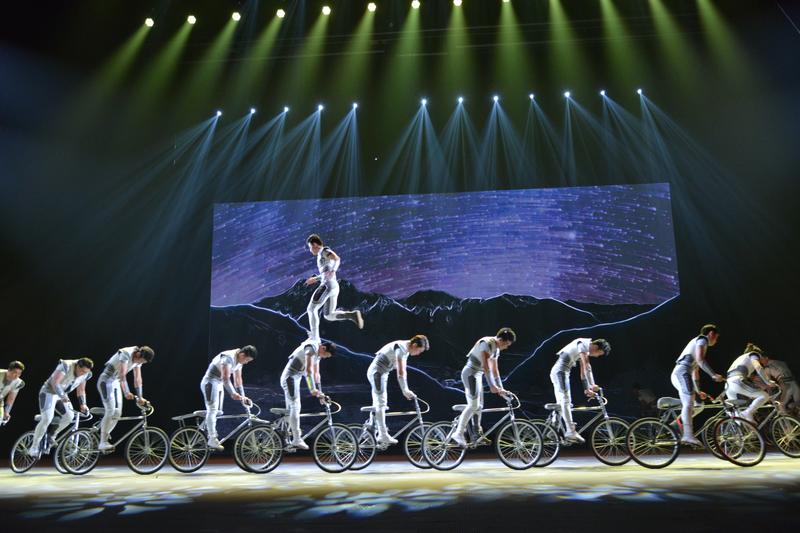 One of the acrobats who performed in the new show is Wang Siqi, who went through rigorous training every day during the past 10 months. He had to hang upside down for two hours each day and repeated the process of falling down from the air and climbing up to the pole over and over again, Zhu says.

"The audiences are also quite different nowadays. They not only want to see stunning acrobatic skills but also hope to watch a show which is beautifully choreographed and narrated with stories," Zhu says.

Wuqiao county, Hebei province, is considered to be the birthplace of Chinese acrobatics.

The show centers on zhongfan, or flagpole balancing, one of the oldest acrobatics skills in China. Male acrobats, usually about 25, display their skills by lifting, throwing and balancing bamboo pillars, which are more than 10 meters tall and each weighing about 50 kilograms, using their hands, backs, jaws and foreheads. The pillars carry huge flags decorated with patterns of clouds and dragons, which wave in the air as acrobats perform their movements.

According to the show's director Gu Liangliang, the acrobatic technique zhongfan originated in ancient China's Tang and Song dynasties (618-1279) and was commonly seen in temple fairs as a major entertainment.

"We've choreographed more than 10 new movements in the show and the acrobats had to practice very hard to master the new movements since each time they move with the pillar, it takes strength and balance," says Gu. 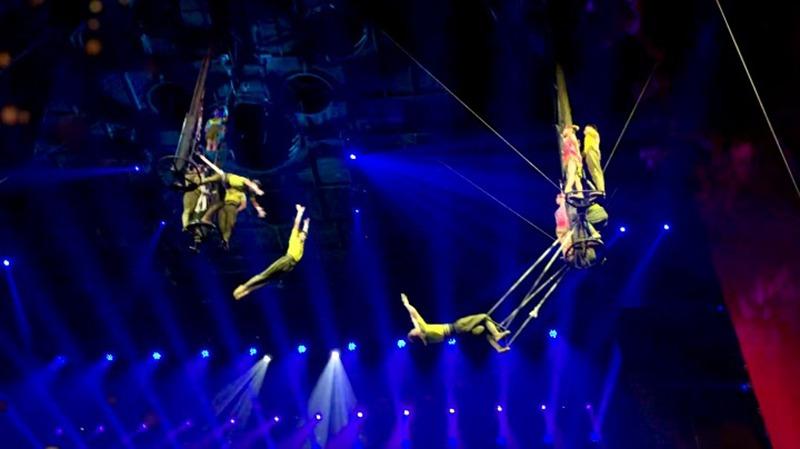 "We let the male acrobats cycle faster than the female acrobats. We also designed new movements, such as having one acrobat walking on the back of the riders just as fluidly and steadily as walking on the ground," says Sun. "It took a very long time for them to practice and to display these extraordinary feats of strength, beauty and physical control.

"When we performed during the competition, the audience not only gave warm and long applause but also cheered and screamed out with excitement. Their feedback is as important as the award," Sun adds.

The 11th China Acrobatics Golden Chrysanthemum Awards was part of the fifth China Acrobatic Arts Festival, which was held in Puyang from Nov 8 to 13. Organized by the China Acrobats Association, the festival was first held in Beijing in 2001 and then in 2011, and later held in other Chinese cities: Luoyang of Henan province in 2016 and Puyang in 2019.

Besides the competition, acrobatic shows were staged during the festival, including The Butterfly Lovers, performed and produced by the Guangzhou Acrobatic Arts Troupe of China, featuring the company's star acrobats Wu Zhengdan and Wei Baohua.

"China's acrobatics troupes have gained an international reputation with touring and competing overseas. They have received warm feedback from audiences at home and abroad and won lots of awards," says Tang Yanhai, vice-president of the China Acrobats Association. "With new choreography, new music, new stories and new acrobats, we are glad to see that this old art is alive with creativity."