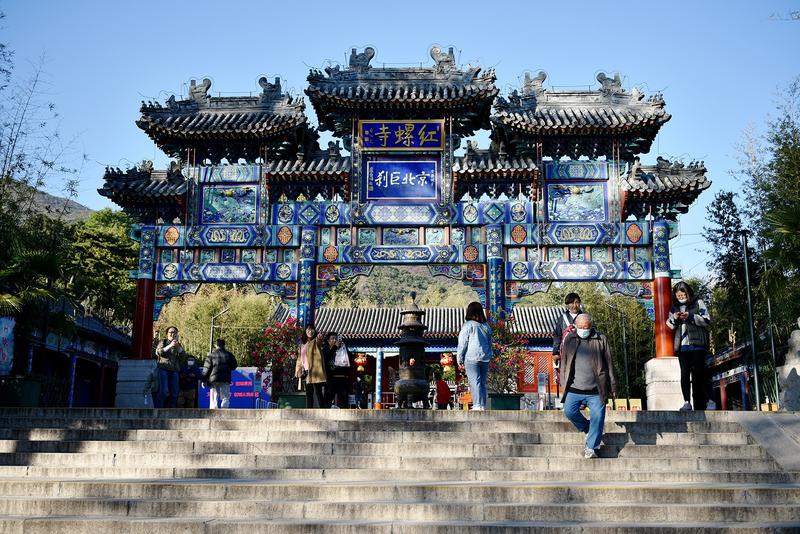 Hongluo Temple opens its doors to thousands of visitors every autumn. (CHEN XIAODONG / FOR CHINA DAILY)

Visitors to Beijing during the 1930s would probably have been recommended by tour guides to visit some of the city's temples during their stay.

Nowadays, hutong, or alleyways, are considered a symbol of the Chinese capital's urban planning, architecture and local people's lives, making it stand out from other major cities worldwide.

However, few people are aware that temples used to play a key role in hutong community life, providing space for public participation in activities such as education, working, trading and even healthcare.

Zhao Zhan, 36, a local resident, said, "I lived in Douban hutong in Dongcheng district since childhood, until I moved from that area when I started working.

"As Yonghegong, the Lama Temple, was close to my home, I went there a lot when I was young to pray for many things, including being accepted by my dream university, landing a decent job, and sometimes to wish for a good marriage.

"I am not religious. For me, the temple is more of a place to make wishes, and then I work hard to make them come true. I also like the peace and quiet there," he said.

Yonghegong is Beijing's principal and largest Buddhist temple. It was built in 1694 as part of the city wall before Emperor Yongzheng took the throne in 1722. Yongzheng's son, Emperor Qianlong, sent for hundreds of Tibetan monks and students, housing them in the temple in 1744.

From then on, the venue served as a temple and a monastery.

Zhao said a number of small temples are located in the area between Yonghegong and his home, but he has never visited them, as he is not sure if visitors are allowed admission.

However, if he had lived during the Qing Dynasty (1644-1911), he would probably have visited these temples many times. 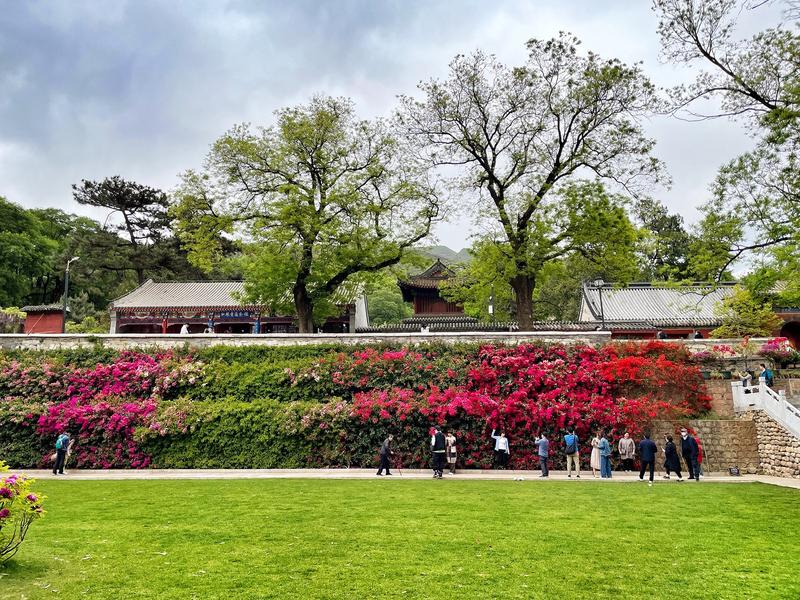 The magazine Life Week quoted Ju Xi, a Beijing Normal University scholar on religion and folk customs, as saying that many people may be surprised to learn that there were about 1,500 temples in Beijing from 1740 to 1950.

During this time, the city covered an area of 40 square kilometers, and most people could see a temple within a radius of 150 meters from any location in the city. On average, there were two to three temples in every hutong, separated by a maximum distance of 500 meters.

Ju said: "Temples had so many functions at that time. They were seen as a form of investment. When people bought houses, they had to pay for the maintenance even if they didn't live in the place. It was a better option to renovate the home and turn it into a temple temporarily."

Prayer was not the only function for those temples, many of which chose to be known by different types of plant.

For example, Fayuan Temple in Xicheng district, which was built in the year 645, has been known for its lilac blossoms since the Ming Dynasty (1368-1644). These flowers complement the ancient structure's red walls, green tiles, carved beams and painted buildings.

In Beijing's western suburbs, Dajue Temple, also known as the Temple of Enlightenment, is popular not only for its history and ancient structures, but also for its springtime magnolia blossoms.

Hongluo Temple, located in the north of Huairou district, welcomes thousands of visitors every autumn with its beautiful ginkgo trees. 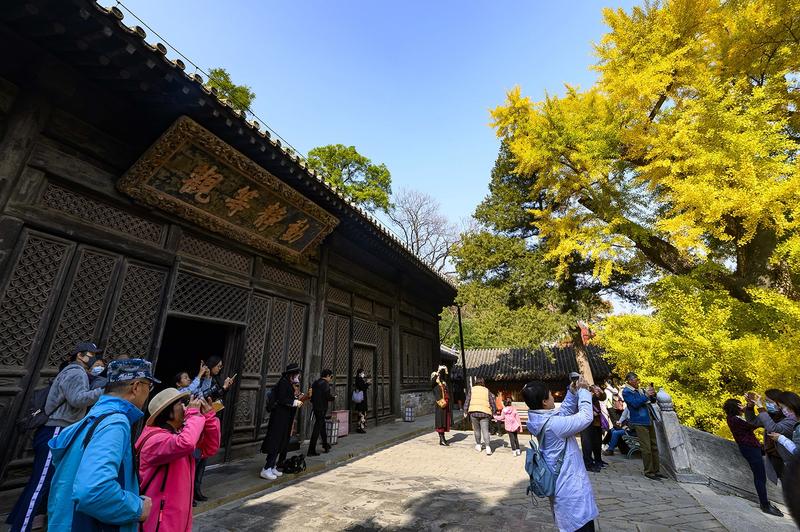 Dajue Temple, also known as the Temple of Enlightenment, is located in western Beijing. (WANG BAOSHENG / FOR CHINA DAILY)

Local residents' lives were closely involved with the temples, she added.

For instance, when children were ill, their parents might take them to a temple to be treated, as many monks had medical skills. When children reached school age, they sometimes went to temples for lessons, because many old-style private schools were housed in such venues.

"When a person failed to find a job in business or farming, they might become a temple monk, which was viewed as a good occupation. Even when people grew old and were homeless, they could spend their later years at a temple, where they were cared for," Ju said.

In present-day downtown Beijing, Guanyin (the Buddhist Goddess of Mercy) Temple, which no longer exists, acted as a small public square for people living in the nearby hutong. For a long time before the 1950s, it functioned as a nursing home for the elderly and provided accommodations for the homeless.

In the book Peking: Temples and City Life, author Susan Naquin, a scholar from the United States studying Chinese history and culture, uses the city's temples to analyze people's lives during the Ming and Qing dynasties.

She tells how religious establishments of all kinds were used for fairs, markets, charity work, tourism, politics and socializing.

Naquin shows that temples, by providing a place where diverse groups could gather, were homes to a surprising number of community-building and identity-defining activities. 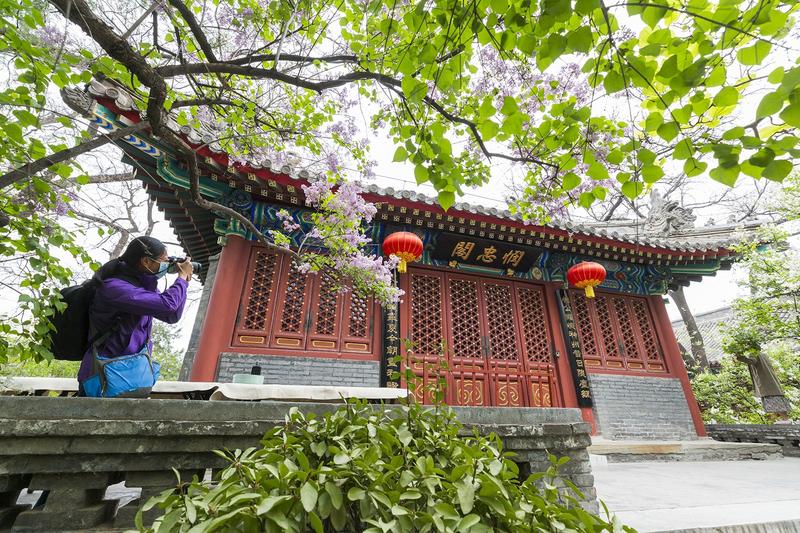 Fayuan Temple, built in the year 645, is known for its lilac blossoms. (PHOTO PROVIDED TO CHINA DAILY)

Nowadays, most temples in Beijing no longer function as religious venues. With an increasing number of people nationwide visiting the city in recent decades, some temples became places for locals to gather, while others were turned into small business stores selling daily goods for hutong residents.

However, the role played by temples as gathering places for such residents has gradually disappeared.

When people walk in a hutong, they usually feel hemmed in, but in recent years, the Beijing municipal government has introduced a series of measures aimed at restoring the atmosphere of the past.

Urban planning professionals, conservators and technicians have been invited to listen to hutong residents' needs and to discuss with them solutions for modern living and a better environment, as well as protection for ancient buildings.

For example, in Dongcheng district, Yuer hutong, which translates as "drizzle", used to be full of untidy yards and was home to numerous households.

In 2015, the authorities gave local residents a choice－they could either stay or leave.

Those who chose to leave were moved to new apartments out of the hutong and given financial subsidies. People who opted to stay were given a renovated yard with more living space.

For example, five families were living in one of the yards in Yuer hutong. Three of them chose to leave, while two families decided to stay. After renovation work, the yard was transformed into five one-bedroom apartments with modern facilities. 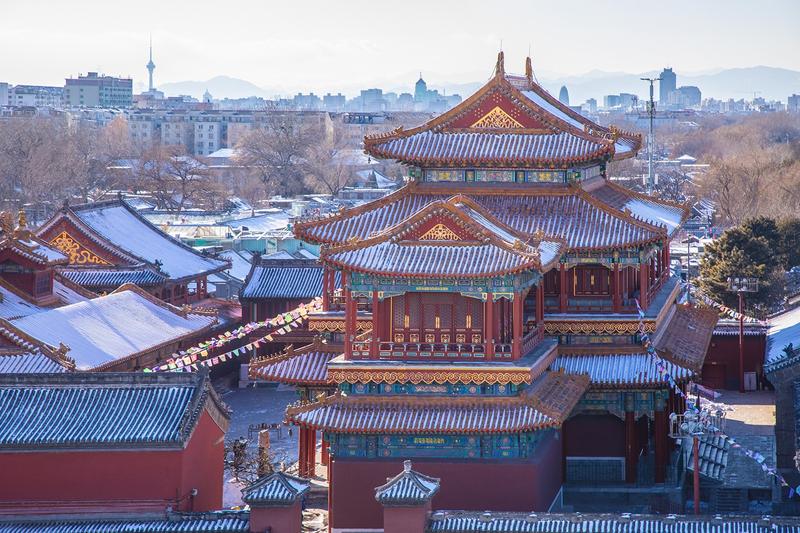 Yonghegong, the Lama Temple, is the largest Buddhist temple in Beijing. (GAO ZEHONG / FOR CHINA DAILY)

According to People's Daily, from 2015 to 2020, a total of 1,332 residents from 437 households left the hutong for modern communities, raising the per capita living space from less than 25 square meters to 110 sq m.

As people moved out, the space they vacated in the hutong was used for gardens, public halls, meeting rooms, or for cultural and entertainment activities. Repair work also started at some temples.

Hou Xiaolei, a professor at the Central Academy of Fine Arts' School of Architecture and planner for Tiantan sub-district in Beijing, said making the best use of temples after repairs was fully discussed.

In 2014, Hou's team started repairs at Qinghua Temple in Tiantan sub-district. Although it was built in the Ming and Qing dynasties, the front and central halls were still in good condition. The cornices, carved railings and tiles were also well preserved.

"However, inside the temple, there was an untidy yard, which was a sad sight," Hou said. "The repairs have now been mostly completed, and instruction on ancient architectural repairs is now being given at the building."

The repair team is also thinking about how to further open the venue to the public, as the authorities and professionals have gone to great lengths to vacate the temple and renovate it.

Lin Fan, 36, an engineer in Beijing, said he is interested in history and keen to visit temples when the public is granted admission.

"Walking through these ancient structures is a good way of experiencing and imagining residents' lives in ancient times, as temples symbolized people's beliefs," Lin said.

Liu Jingrong, a student majoring in art at the Central Academy of Fine Arts, said she loves to gain inspiration from the beauty of temples. "Chinese architecture is valuable for those like me as we learn and work," she said.

Her favorite temple in Beijing is Fayuan Temple, a 1,400-year-old Buddhist structure in the south of the city. The venue has rich historical and cultural significance, and the 16-hectare surrounding neighborhood is one of the hutong communities in the city that remains intact.

Many celebrities once lived or took part in events in this area, adding to its cultural significance. For example, renowned Indian poet Rabindranath Tagore and his Chinese counterpart Xu Zhimo visited Fayuan Temple together in 1924.

The venue is now home to the Buddhist Academy of China and the China Buddhist Literature and Heritage Museum.

Repair work at Fayuan Temple, which started in 2006 with investment of several hundred million yuan, was completed in 2019, before the site opened to the public, with admission tickets costing 5 yuan (75 cents).

Liu said, "It's well worth buying a ticket, as visitors can experience religion, culture, tradition and enjoy nature at the same time."