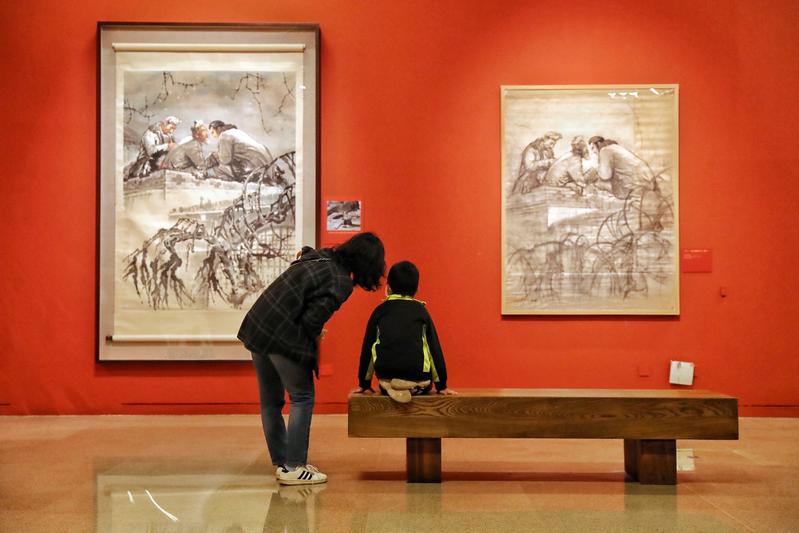 Visitors look at paintings at the exhibition, which pays tribute to Liu's lifelong service of people. (JIANG DONG / CHINA DAILY)

Late modern artist Liu Wenxi is often hailed as "the Chinese painter whose work has been viewed the most", because a portrait he made of Chairman Mao Zedong is featured on the bank notes of the fifth edition of the nation's currency, the renminbi, which has been in circulation since 1999.

In addition to that, Liu is remembered as "a people's artist" as he created a body of work that provides a vivid portrayal of grassroots Chinese, especially the farmers in the northern part of Shaanxi province.

Liu developed an emotional bond with Shaanxi and the people living there during a trip in 1957, during which he was to find inspiration for a graduation work. He was then a student of Zhejiang Academy of Fine Arts, now China Academy of Art in Hangzhou, Zhejiang province.

After graduation in the following year, Liu became a teacher at Xi'an Academy of Fine Arts in Xi'an, Shaanxi. Over the next six decades, until his death, he lived, worked and traveled extensively in the province. He left an artistic legacy depicting various aspects of the social life of local farmers, lauding their hard work and unyielding spirit in the face of life's difficulties.

Art for People, an exhibition currently being held at the National Museum of China in Beijing and set to run through early December, pays tribute to Liu's lifelong service of grassroots people. On show are more than 200 ink-and-water paintings, drawings and sketches that depict his 60-odd journeys to the many villages tucked away in the remote mountains on the Loess Plateau in Shaanxi.

Liu once said, "Shanbei (northern Shaanxi) is in my blood. The land, the landscapes, its history and cultures keep providing me abundant nourishment, and enriching the reserve of my source of life." 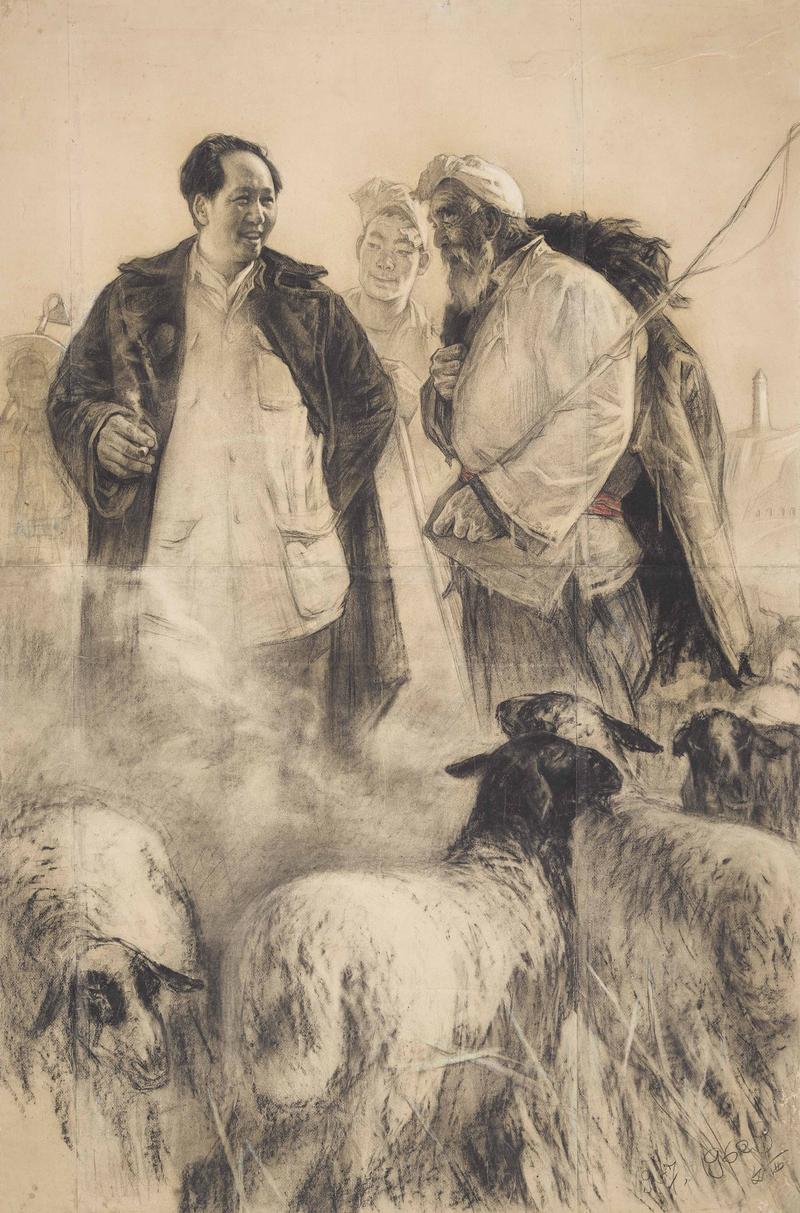 Chairman Mao and Shepherd, a charcoal drawing on paper by Liu Wenxi on show at Art for People, an ongoing exhibition at the National Museum of China. (PHOTO PROVIDED TO CHINA DAILY)

Liu is renowned for a figurative approach to his subjects. "His animated brushwork captures the liveliness of people in Shanbei and their firm and simple attitude toward life, against the vastness unique to the Loess Plateau," says Xu Jiang, vice-chairman of China Artists' Association and former dean of China Academy of Art.

"The scenes of the lamps that light up yaodong, the earthen cave dwellings, in Liu's paintings, as well as the depiction of people's enthusiasm when performing the distinctive yangko folk dances, accentuate the vigor of a generation of Chinese," Xu adds.

Highlights of the show include a charcoal drawing on paper titled Chairman Mao and Shepherd, which shows the late leader enjoying a chat with an old man on his way to herd sheep. Liu made it in 1957 while in Yangjialing, a village not far from Yan'an, the revolutionary base of the Communist Party of China in the 1930s and '40s.

Liu once recalled that, while staying in Yangjialing for a certain period of time, he often sketched by the side of Yanhe River. "I saw old shepherds crossing by with their sheep. I couldn't help but imagine the scenes of Chairman Mao taking a walk by the riverside from time to time and having a casual chat with the villagers."

Yang Xiaoyang, a well-established painter and one of Liu's students, says Liu traveled to Shanbei so often that he made good friends among the farmers there, and their friendship lasted for decades. "People treated him like one of their sons, brothers or uncles. They ate and drank together, and celebrated Spring Festival together for several years.

"He lived up to the oath that he would delve deeply into life and serve the people with his art."