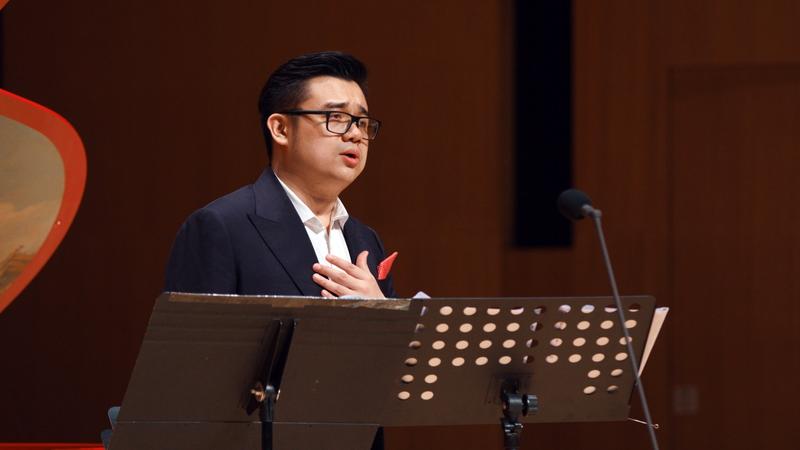 "The recital was conducted entirely in the European chamber music tradition, and one of the major ways of expression is art songs. It can be said that song cycles are the most comprehensive way to perform art songs," Zhang says.

"The song cycle contains 16 pieces of work. Each can be performed individually as an art song. But when I perform it as a whole, I need to pay attention to the coherence of the pieces and consistency of the story, and express the nuances and change of emotions."

The 31-year-old singer was introduced to classical music at an early age growing up in Beijing, where he acquired a background in conducting and playing the violin. When entering primary school, he started singing with the school choir and won the first prize in a Beijing singing contest.

At the age of 14, he started learning bel canto from bass singer Wen Kezheng, marking the beginning of his systematic training to become a professional singer.

After getting his bachelor's and master's degrees from the Nanjing University of Aeronautics and Astronautics in Jiangsu province, he studied at Italy's Luigi Cherubini Conservatory of Music from 2015 to 2018 for another master's degree in vocal chamber music.

His study in Italy was punctuated with stellar performing experiences, including a rendering of Algernon in the opera The Importance of Being Earnest at the Maggio Musicale Fiorentino, and hosting a solo concert in 2018 at the Palazzo Gondi in Florence.

But Zhang also sought to participate in events that centered on cultural exchanges, such as a gala hosted by the Confucius Institute Ljubljana to celebrate of the 25th anniversary of China and Slovenia forging diplomatic ties.

He also joined the Huaxing Arts Group Florence in 2018, a branch of art troupes affiliated to the Overseas Chinese Affairs Office of the State Council that aim to promote Chinese culture, and is now the art director of the troupe.

"Nowadays, many Chinese students studying abroad, including myself, will sing Chinese songs during performances, especially when hosting solo concerts. We are very willing to introduce to the world the excellent art songs and arias from China," Zhang says.

"The Huaxing Arts Group is getting bigger in scale. It also provides a closer link among overseas Chinese from different countries and presents works from China to a foreign audience. When the pandemic ends, I hope I'll be able to host my own performances in Europe."

Tang Youjing, former cultural counselor at the Chinese embassy in Italy, attended the recent concert, after which he wrote a review saying the performance was "delightful, moving and laudable".

Tang added, "Like the rest of the audience, I enjoyed it with delight and admiration, and felt as if I was in a wonderland. The art songs were mastered by Zhang Mingyu with ease in Chinese, German and Italian. He has reached a pretty good level of vocal control and artistic impact."