By Chen Meiling in Beijing and Feng Zhiwei in Changsha

Ding Siyan, who works at a breeding center in Changsha, hopes online efforts help educate people about the wild felines 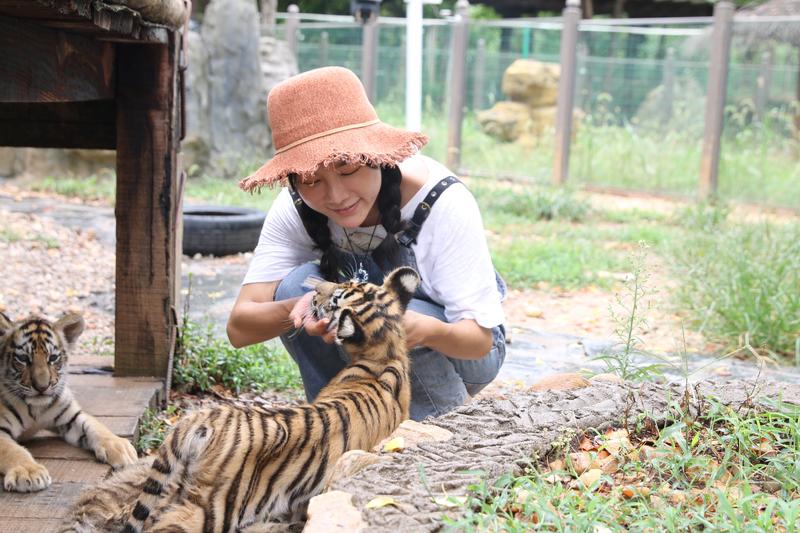 Ding Siyan walked into the tiger room and put down her bag.

"Babies, your mommy is here!" she called out, as tiger cubs emerged from all corners of the room, jumping up and down around her.

"This is the happiest moment of my day," she said.

Although she has been bitten seven times, the young woman does not think of tigers as frightening beasts. Rather, she finds the cubs "cute and interesting".

"They did not mean to hurt me. They were just curious," she said.

Since April, Ding has been working as a keeper and livestreaming anchor at Sanzhen Tiger Conservation, a tiger breeding center in Jinjing town in suburban Changsha, Hunan province.

Now a qualified cub-sitter, she said she knows everything about her charges.

While kneading meatballs to feed the cubs, she answered a question from netizens about what meat she was using.

"We generally use beef, chicken, duck, rabbit or mutton, but no pork, because they get fat if they eat too much pork. But we feed cubs younger than three months pork, because it is tender and helps them avoid constipation," she said.

Besides feeding, bathing and giving the cubs physical checkups, Ding also entertains them.

In the afternoon, as the cubs rested in the sunlight, Ding took out a water gun and sprayed them. Some woke up, none got annoyed, and one ran around the spout, catching the water with its mouth.

"It's a way to cool them in hot weather. Besides, tigers like water," Ding said. "They are happy playing like this."

As the cubs often have lots of energy and are very curious, they bite everything they see. Sometimes, it's a duster, and other times, it's a pair of slippers, so Ding has to play tug-of-war with them.

Most of the time, she loses. Although the cubs are only several months old, they are already stronger than her. Ding doesn't mind. "Seeing them grow stronger every day, I feel a sense of achievement," she said.

Her fear of tigers disappeared after a cub bit her badly enough to bleed, and she had to get vaccinated at hospital.

"I was grooming one cub when another crawled up on my back. There was lace on my clothes, and it was thin, so its teeth got into me," she said.

To protect herself, she said she often wears a long dress, because if the cubs want to bite her clothes, they can bite the hemline, whereas trouser legs are closer to the body.

Thanks to her previous work in media, Ding has good speaking skills and is able to answer all the questions netizens ask during livestreams. She was attracted to her new job by the thought of "fresh air, tranquillity and cute tigers in deep mountains".

The job is not easy. Ding works more than four hours outdoors everyday, despite the summer heat, and she has put a small umbrella over her cellphone to keep it cool and shade the screen while livestreaming. In addition, even indoor spaces don't have air conditioners because the cubs need to adapt to the temperature.

She said that baby tigers are delicate and will die young if not taken care of properly.

She hopes to inspire more people to protect them.

"I want my livestreams to help more people learn more about tigers and how to preserve their habitats and water sources," she said.

Far from shopping malls and other entertainment, Ding likes to make art in her spare time. Her creations include a folding fan decorated with tiger cub footprints, a stone seal and oil paintings of the cubs.

Lai Bing, head of Sanzhen Tiger Conservation, said Ding has become more capable of looking after the cubs, and they have grown very close.

"I hope more young people will get involved in the protection and promotion of wild animals," he said.

The park has set up nine livestreaming chat rooms dedicated to the daily lives of the tigers－a top-level protected animal in China－as part of its efforts to promote conservation.

Lai said that although the livestreaming only began five months ago, netizens have shown great interest. In May, a livestream of a tiger giving birth to three babies attracted about 1 million views and lured visitors to the park to see the newborns, he said.

He added that the hidden cameras are there to record and have no influence on the tigers' daily lives.

Zhu Youfang in Changsha contributed to this story.