Scholars determined to overcome their hardships 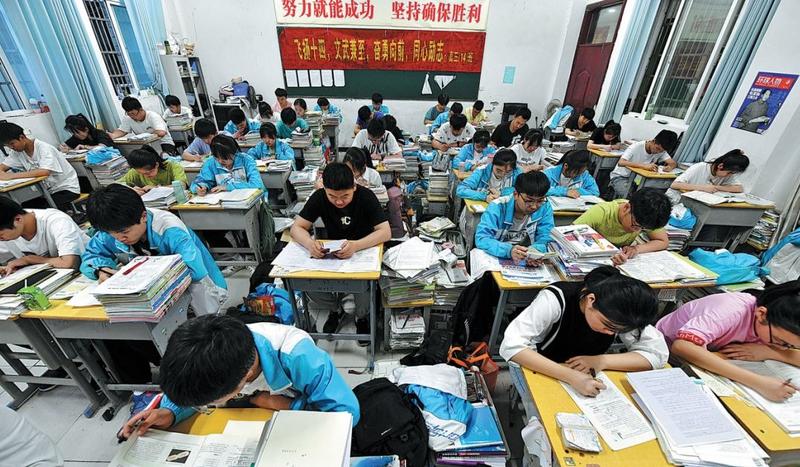 He has even written this conviction down in a notebook to give himself inspiration. This message was also conveyed to millions after Zhou's story circulated widely online.

The 18-year-old, whose left leg has been amputated, scored 684 points out of a possible 750 in this year's national college entrance exam, or gaokao, and has been admitted to Tsinghua University in Beijing.

His mother, Xiao Yongzhi, said, "The whole family is so proud and happy for him, but I also feel sorry for what he has gone through in the past two years."

In September 2019, a truck ran onto a sidewalk, crushing Zhou's left leg and injuring his right. In great pain, he managed to remove a lace from his shoe and used it to bind the wound.

After hours of surgery, doctors were able to save his life. Over the next six months, Zhou underwent a number of surgeries, but doctors could not save the lower half of his left leg, which had to be amputated.

When Zhou was 3, his parents left home to support the family by becoming migrant workers in Yancheng, Jiangsu province. He and his younger sister lived with their grandparents.

After her son's accident, Xiao quit her job to care for him full time.

She said, "Although the accident was devastating for the family, Zhou did not waste time feeling sorry for himself."

The day after his first operation at a local hospital, Zhou resumed his studies. As the family members switched to hospitals in Shanghai, they always brought a large bag of schoolbooks with them so that Zhou could continue his studies.

In April last year, he returned to his class to prepare for the gaokao.

Zhou wears a prosthetic leg and uses a crutch or a wheelchair. The school allocated him and his mother a separate dormitory and offered to allow her to work there as a janitor.

However, being absent from class for more than seven months meant that Zhou could not keep up with his peers.

"Although I was frustrated, I still kept going," he said. "My classmates helped me move the wheelchair and carried things for me. I am very grateful to them."

Li Jiasheng, Zhou's head teacher, said he is highly impressed with the student's performance in the gaokao, but is not surprised by it.

"No matter what happens, he remains calm and tries to turn a bad situation into opportunities to make him stronger," Li said, adding that Zhou has been an inspiration to his classmates and teachers. 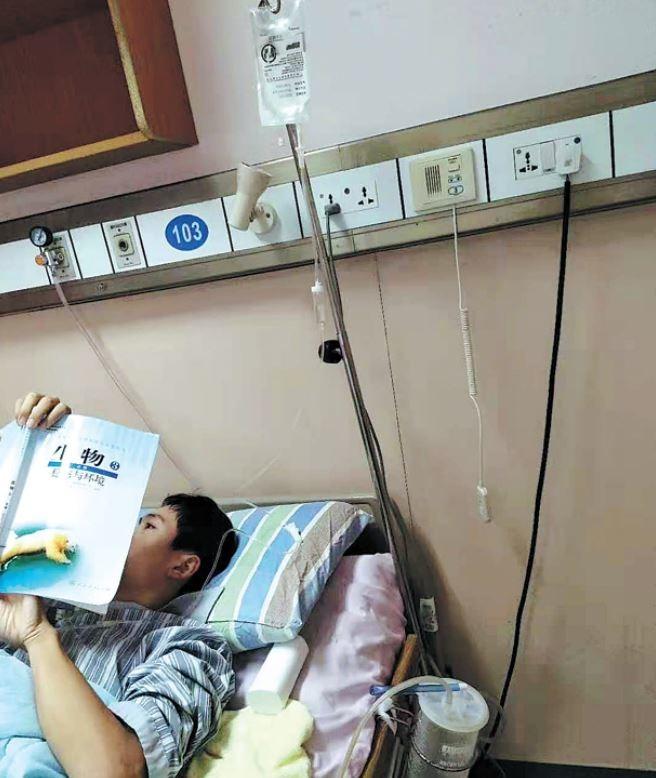 Zhou is just one of many Chinese students determined not to let the hardships they experience in life deprive them of a better future.

Zhang Xueyan, from Huai'an, Jiangsu province, scored 757 points out of a possible 770 in this year's high school entrance exam, or zhongkao. She achieved full scores in eight subjects out of 12.

Her parents do not make much money and the family has to support three children. To avoid placing undue financial pressure on the family, Zhang has never taken private tutoring courses, unlike most of her classmates, according to media reports.

"We cannot choose our parents, yet as we learn more, the lack of a prestigious family background will be overshadowed by our brilliance," Zhang told local media outlet Litchi News.

Chen Liang, a high school graduate from Mianyang, Sichuan province, saw his father buried the day before taking the gaokao on June 7, according to Red Star News. Chen's mother died when he was 1 and his grandparents passed away when he was still very young.

In March, his father was diagnosed with cancer of the esophagus. He had insisted that Chen continue preparing for the gaokao, as he always wanted his son to succeed through education.

Every weekend, Chen returned home to take his father to the hospital for treatment.

"My father kept getting thinner and I worried about him all the time at school. I was afraid that someday he would leave me," said Chen, who did well enough in the gaokao to enroll at university.

"I thought I would only be able to attend a vocational college and I 'told' my father about my score," he said.

Since media reports of Chen's story appeared, many people have contacted him to offer financial help. However, he turned down donations and started to work part-time at a local homestay.

"I learned from my father that you can earn a living through hard work. I am grateful to all the people who wanted to help me, but I will study hard to earn scholarships and also find part-time jobs at university," he said.

Chen's head teacher, Zeng Hongjun, said the school exempted the student from tuition fees for the past three years. 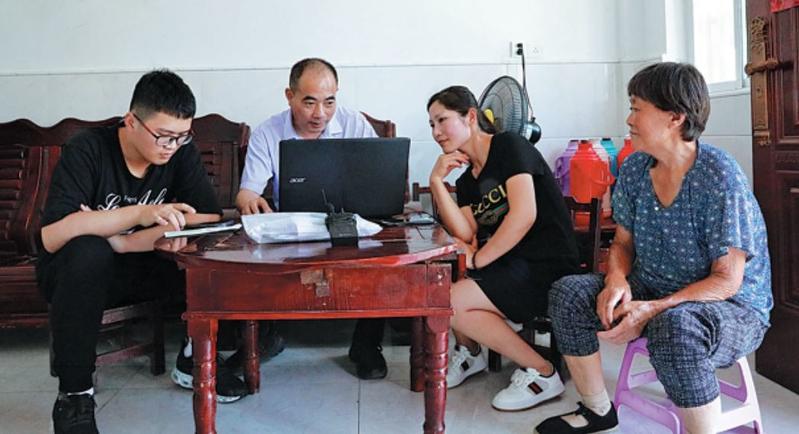 The students have also warmed many hearts on social media platforms, with hashtags about their achievements receiving billions of views on Sina Weibo.

One netizen commenting about Zhou said those who have experienced the most difficulties work the hardest and receive the best rewards. Another netizen said, "As long as you do not give up on yourself, the world will not fail you."

Commenting on Zhang's high grades in the zhongkao, The Beijing News said it is not unusual for students from disadvantaged backgrounds to score well in entrance exams, and their success is valuable, as it fuels belief in the importance of strong commitment and unremitting efforts.

The newspaper said that although students have different levels of ability and it is hard to achieve as many full scores in exams as Zhang did, her attitude in facing challenges head-on is a valuable lesson for everyone.

Many netizens willing to offer support asked the government to give the students more help.

In 2011, a government-led financial aid system was introduced in China for students from preschool to postgraduate level. The system was set up in response to a government pledge not to allow any student to drop out of school because of financial difficulties.

Moreover, a multifaceted aid program has been established for college students, which includes national scholarships, grants and interest-free loans, school scholarships and grants, subsidies for students from families with financial difficulties, subsidized meals, and tuition fee reductions and exemptions.

The government has also established a "green channel" to allow college entrants in financial difficulties to register by offering interest-free loans to cover tuition and accommodations.

In 2019, financial aid for students rose for the 13th consecutive year, reaching 212.6 billion yuan－8.05 percent more than in 2018, according to the ministry.

A special program was launched by the ministry to allow universities to enroll students from rural and formerly impoverished regions who have relatively lower grades.

Some 5.14 million students from once-impoverished areas have received higher education since 2012, with 700,000 of them admitted to key universities, providing millions of poor families with the first generation to receive a college education, according to the ministry.

Shi Jie, who works at the financial aid center for students at Southeast University in Nanjing, Jiangsu, said that in addition to helping disadvantaged students financially, more needs to be done to care for them psychologically.

"Many students from impoverished families are shy and reserved. We constantly need to encourage them to open up more, help them build their confidence and fit in better with others, especially when they first enter university," he said.

Moreover, universities should also help the students learn skills such as computer science, music and art, Shi said, adding that the center offers free courses for them in various subjects to help them keep up with their peers.

Wang Yunyun, who works at the student financial aid center at Beijing Jiaotong University, said the school has opened a psychological hotline and offers on-site psychological counseling for students in financial difficulties.

The students often adapt to university life quickly, she said. "Compared with their peers who are better-placed financially, these students are more resilient and can handle difficulties better. You don't often hear them complain," Wang said.

Most of the disadvantaged students work hard at their studies, and many find part-time jobs while they are at school to alleviate the financial burden for their families. Many of them also perform better than others in their studies and have more chance of winning scholarships and other rewards, she said.

These students have a strong sense of responsibility and know they are the hope of their families and can bring them a better life through hard work, she added.

Zhu Lixin in Hefei contributed to this story.