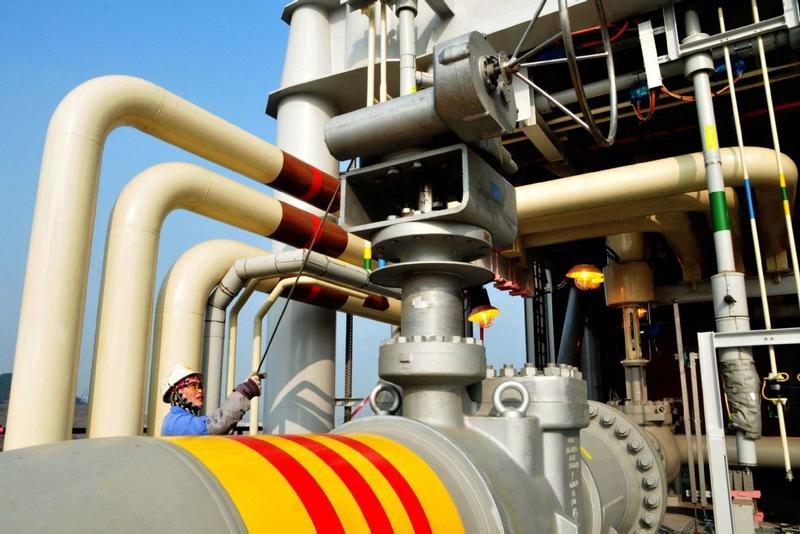 As the leader of the country's LNG sector, CNOOC will continue accelerating the clean energy supply capacity to help China achieve carbon neutrality on time

In all, six tanks independently developed and designed by CNOOC will be built at a cost of 6.1 billion yuan (US$955.9 million).

In the first phase, four LNG storage tanks had been built. Upon completion at the end of 2023, the full project will have 10 tanks, including six new ultra-large tanks, which will have a total volume of 270,000 cubic meters. Supporting facilities will start operations at the same time.

The Jiangsu LNG Binhai Receiving Station, which will house CNOOC's upcoming six LNG storage tanks, will have an annual LNG processing capacity of 6 million metric tons and will become the largest LNG storage base in China, said CNOOC.

The six tanks will mark a breakthrough in the design and construction technology of China's ultra-large LNG storage tanks, said CNOOC.

Their construction will play a key role in the country's natural gas supply, storage and sales system. The project will also help the country keep its pledge to peak carbon emissions by 2030 and achieve carbon neutrality by 2060, said CNOOC.

Wang Dongjin, chairman of CNOOC, said the expansion of the LNG projects in Jiangsu is in accordance with the government's plan to step up natural gas supply.

As the leader of the country's LNG sector, CNOOC will continue accelerating the clean energy supply capacity to help China achieve carbon neutrality on time.

Li Ziyue, an analyst with BloombergNEF, said the upcoming six LNG tanks in Jiangsu are expected to further enhance China's natural gas storage capacity, which is still far from the target.

The facility is key to meeting peak-shaving and seasonal rebalancing demand, Li said.

According to CNOOC, the project also plays a key role in the industrial upgrade in the Yangtze River Economic Zone. Some 6 million tons of LNG can help reduce carbon dioxide emissions by 18.82 million tons and nitric oxide emissions by 334,000 tons, compared with traditional energy like coal and oil, it said.

CNOOC has been pushing forward the construction of LNG storage tank technology in recent years.