By Cao Chen in Shanghai 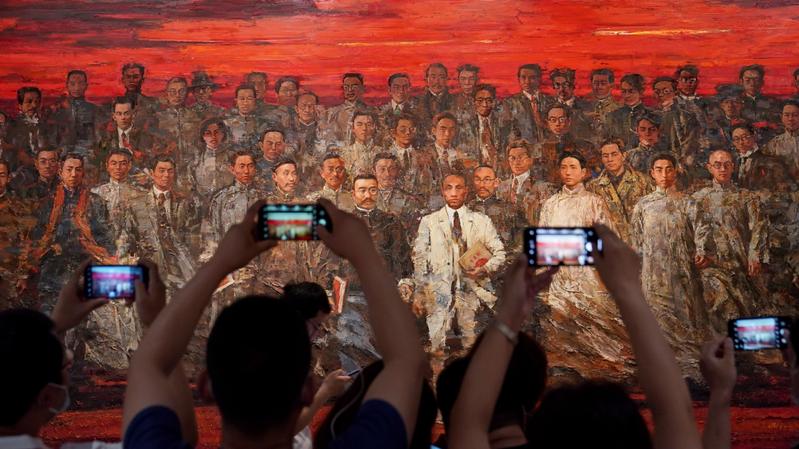 Visitors to the new memorial site photograph the oil painting Spark, which features the 50-plus founding members of the Communist Party of China. (LIU YING / XINHUA)

The Communist Manifesto, by the two great German thinkers Karl Marx and Friedrich Engels, was first published in China in August 1920.

Visitors who go to the newly opened Memorial for the First National Congress of the Communist Party of China, located in Shanghai's Huangpu district, have the chance to see these precious first editions of The Communist Manifesto in the Chinese language.

This is an unprecedented display of valuable cultural relics from the Party’s founding period. Visitors will gain an understanding of the Party’s beginnings and also learn about why it was established in Shanghai

The venue is close to the site of the First National Congress of the CPC, where 13 Chinese delegates and two foreign representatives from the organization Communist International convened in July 1921.

The new location includes an exhibition hall where visitors can view a total of 1,168 historical relics, photographs and diagrams showing how the Party was founded. A complete set of 72 translated versions of The Communist Manifesto, including the first editions, is one of the highlights.

A 24-year-old guide, surnamed Zhang, who welcomes visitors to the memorial five times a day, introduces the history of the CPC to them as well as the Party's development in China over the past 100 years.

The venue has become one of the most-visited "Red tourist sites" in the city since it opened on June 3. The daily allocation of 10,000 visitors has been fully taken each day, according to the management.

"Although many visitors are familiar with the Party's history, listening to the stories behind the exhibits offers an immersive experience that cannot be matched by other ways of learning," Zhang told Shanghai news outlet ThePaper.cn.

The memorial site－a typical Shanghai house with a courtyard and stone-framed gates known as shikumen, where the party was conceived and born, is located in the former French Concession. It was transformed into a memorial in 1952, and like the new venue, is open to the public for free.

A century on, the building looks much as it did in the 1920s, and has become a landmark for the city's Red history, allowing visitors, particularly young people, to learn about the Party's past and present. 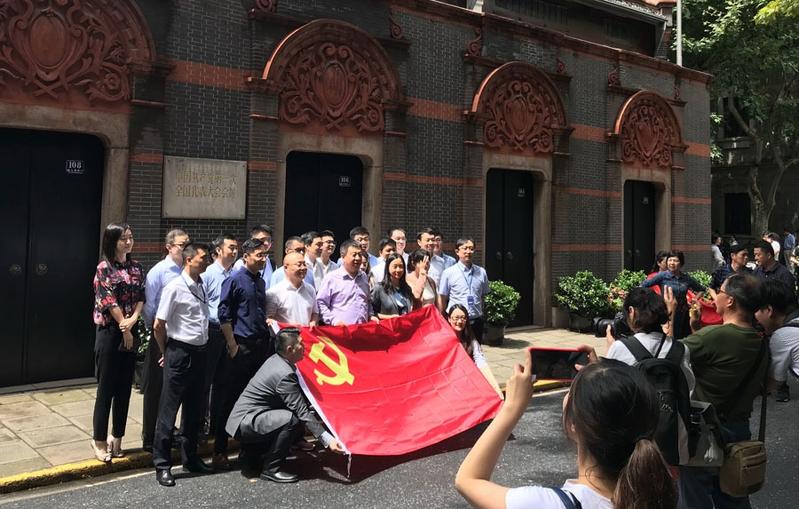 Visitors take pictures in front of The Memorial for the Site of the First National Congress of the Communist Party of China in Shanghai on June 1, the 98th anniversary of CPC's founding. (GAO ERQIANG / CHINA DAILY)

To mark the Party's centenary this year, the new memorial was built close to this site, with construction starting in August, 2019.

Li Qiang, Party secretary of Shanghai, said at the opening ceremony for the new venue, "This area witnessed the groundbreaking event of the Party's founding, which marked the great start of the Chinese revolution, carried the great dream of the Party, and inherited the great spirit of Party members. It's the eternal glory of the city to be the birthplace of the Party."

The city would make full use of the Party's rich resources to promote its culture and history, Li said.

Xia Bing, deputy Party secretary at Arcplus Group, a Shanghai engineering company that built the new memorial, said it also features a shikumen frontage. The venue is located across the street from the original memorial site.

To improve the experience for visitors, the new memorial boasts displays of peonies, which symbolize prosperity and good fortune, and azaleas, which represents the "ideals and hopes of revolutionaries" in China.

Pan Jianfeng, director of landscaping management at the Huangpu district landscaping institute, said this line of thought originates from Azalea, the theme song to the classic children's film Sparkling Red Star, which was produced by Bayi Film Studio and premiered in 1974.

The movie tells the story of a Chinese teenager during the War of Resistance Against Japanese Aggression (1931-45).

A gift shop at the new memorial offers 200 types of creative products with a Party theme and with the venue's copyright, which was registered in April.

Zhang Yuhan, a researcher at the memorial, said that above all, the new venue aims to offer a better experience for visitors to learn about the Party's history. 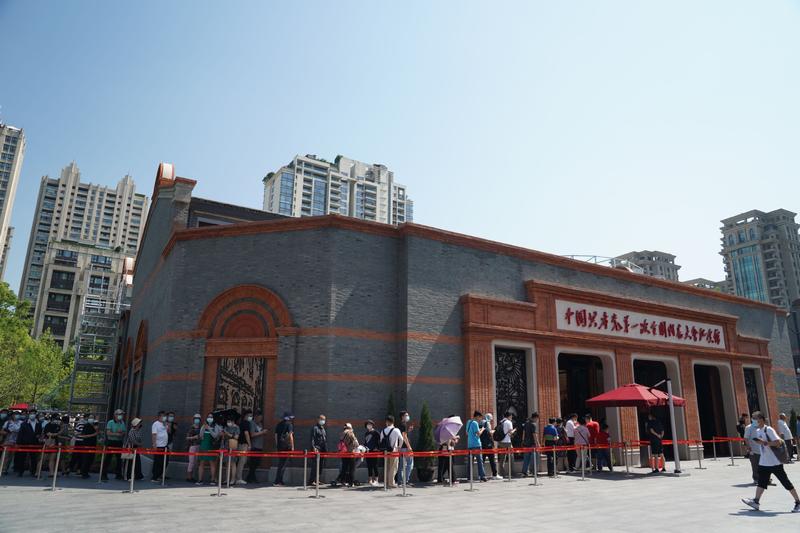 Visitors line up for admission to the new memorial site on Sunday. (LIU YING / XINHUA)

To prepare for its permanent exhibition, Epoch-Making Beginnings: Founding of the Communist Party of China, the venue searched for and collected revolutionary relics nationwide, including items from Party members' former residences and memorials, Zhang said.

For example, the display includes replicas of a brown scarf and a white shirt, the originals of which belonged to Chen Tanqiu, a Party member from Wuhan Martyrs Memorial Hall in Hubei province, who died age 47. A whistle used by Shanghai workers during three armed uprisings in the late 1920s is also on display.

Some exhibits have been donated by the public, including a logbook recording the duties of the Chinese military before Shanghai's liberation in May, 1949, and policies introduced after the liberation. The logbook was donated this year by Shanghai resident Liu Shaling.

Liu, who served from 1992 to 2004 as deputy Party secretary at the Memorial for the Site of the First National Congress of the Communist Party of China, said: "I found the logbook when I was sorting out my late parents' belongings. I hope it will be useful in instructing future generations about the Party's revolutionary spirit and in understanding the country's history."

Zhou Zheng, deputy director at the new memorial, said some exhibits, such as documents in Russian, Japanese and English relating to the founding of the Party, had been collected overseas in recent years.

Xu Kaifu, 72, a Shanghai resident, was the first person to visit the new venue on its opening day. He has been going to the site of the CPC's First National Congress since 1971, but has never become bored.

He said he has great hopes for the new memorial, especially as it boasts all 72 translated versions of The Communist Manifesto.

"It's the first time I have seen such a complete set, paired with the story of how Party members translated, edited and protected this masterpiece during wartime," said Xu. He added that he was impressed by the number of historical relics on display, compared with those at the original memorial.

The exhibition also includes medals commemorating the 1911 Revolution, which ended China's last imperial dynasty, fliers from the May Fourth Movement of 1919, and a toolkit used by the martyr Li Bai, 39, who died in 1949 during the fight to liberate the country.

Zhang said,"This is an unprecedented display of valuable cultural relics from the Party's founding period. Visitors will gain an understanding of the Party's beginnings and also learn about why it was established in Shanghai."