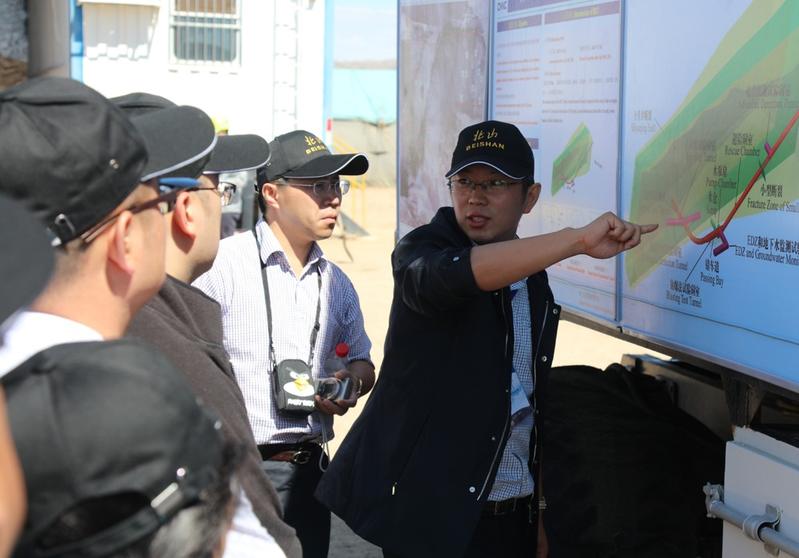 This undated photo shows Chen Liang (right), an engineer, instructing fellow academics in Beishan, Gansu province, in 2016. (PHOTO PROVIDED TO CHINA DAILY)Why relinquish the prestige of teaching at one of France's top engineering schools to toil in the unforgiving desert mountains of the Beishan region in Gansu province? That was the question Chen Liang grappled with when he chose to embark on one of China's most ambitious projects.

The mission is to build China's first geological repository by 2050 to permanently lock away the "demons of nuclear technology"－the high-level radioactive waste that is the most dangerous byproduct of reactions inside nuclear power plants and the waste materials from recycled nuclear fuel.

The search for a candidate site, which began in 1985, was an undertaking that involved hundreds of Chinese scientists and engineers.

"It is a project of the century that will have an impact for millennia," Chen said.

In China, being a big nuclear nation, the safe disposal of high-level radioactive waste is an inevitable problem that we must overcome for the sake of our future generations.

A massive underground research laboratory is now being built in Beishan to serve as the precursor of the repository and further investigate the location's suitability to store such hazardous material, he said.

High-level radioactive waste, which only constitutes about 3 percent of all nuclear waste, is a major concern for any nuclear nation because it is responsible for around 95 percent of the waste's radioactivity, according to the World Nuclear Association.

An accepted permanent solution is to put it in sophisticated casks, bury them hundreds of meters underground, isolated from all biospheres for tens of thousands of years, and wait for the radioactivity to fade. But building such a facility generally costs billions of dollars and decades of field investigation, according to the International Atomic Energy Agency.

"In China, being a big nuclear nation, the safe disposal of high-level radioactive waste is an inevitable problem that we must overcome for the sake of our future generations," said Chen, who is vice-president of the Beijing Research Institute of Uranium Geology. "It is our solemn responsibility as a nuclear power to reap the benefits of nuclear energy and take care of its radioactive waste at the same time."

Last year, Chen, 38, was named one of the 10 most admirable science workers in China and was the youngest recipient of the title that year.

"The road to safe disposal of high-level radioactive waste is long and arduous," he said. "We will keep marching bravely and without hesitation toward that goal."

In May 2009, as Chen was completing his doctorate in engineering at the Lille 1 University of Science and Technology in France, he attended an academic conference in Hong Kong that changed his life.

In November 2000, Wang's team was drilling the second bore hole at Beishan to collect geophysical data when the drill shaft snapped and became stuck underground.

"Our confidence was running high going in because we had just received a large research grant and our first bore hole was very successful," Wang said. "We knew the second bore hole might be particularly challenging, and we tried fixing the situation for over a month but to no avail.

Despite being battered by wind and snow, we felt a burning sense of heroic passion and determination that motivated us to get the job done.

"The cold was so intense that dripping water quickly froze, and we had to start our jeeps with a blowtorch. Our supply and equipment were also inadequate for the brutal winter, so we had to retreat before snow completely cut off the road, no matter how much we didn't want to."

On the day of the retreat, Wang went back to his tent to grab half a bucket of erguotou, a type of strong sorghum liquor, and rallied his men around the unfinished bore hole.

"I tossed a cup of liquor at the sky, poured another cup on the ground and slowly poured a third into the bore hole to honor the Heavens, the Earth and the project," he said.

"We then shared the rest of the liquor and swore an oath to return the next year and get our data.

"Despite being battered by wind and snow, we felt a burning sense of heroic passion and determination that motivated us to get the job done," he said, adding that his team drilled dozens of bore holes in candidate sites around the country in the following years.

After hearing Wang's report, Chen ran onto the podium and declared his desire to work on the project.

"It was eye-opening and eye-watering to know that there is a group of dedicated people willing to toil away in obscurity for decades in no man's land for their scientific aspiration and the nation's need," Chen recalled. "Their commitment and bold spirits resonated deeply with me, and I thought to myself, this is where I belong. I just had to come back and do my part. Every time I recall this story, I still get goose bumps."

In January 2011, Chen left his tenured associate professor position at Centrale Nantes, one of France's best engineering schools. In his farewell class, Chen told his students that he was leaving "to pursue a dream in my heart".

The first year in Beishan was rough for Chen and his colleagues as they had to spend over six months living in the desert, methodically investigating its geology.

Taking a shower was considered a luxury because water had to be shipped in from 100 kilometers away and cost 88 yuan (US$13.50) a metric ton, or around 22 times what city residents pay for their water.

... young people should put their energy, passion and wisdom into meeting the needs of the nation. There will be many challenges along the way, but once you overcome them, the happiness that follows is indescribable.

"We lived in trailers, and the night was so cold that we had trouble sleeping even with three layers of blankets," the silver-haired engineer said. "And during the day, we had to do field work under the scorching sun and harrowing wind.

"The pressure weighed like a mountain. But for me, Beishan is not just mysterious and unforgiving, it is sacred."

Their entertainment options consisted of stargazing, photography, and lining up to call home from the top of a 1-meter-tall wooden stump on the peak of the area's highest hill－the only place with cellphone coverage.

In 2015, Chen was appointed site commander of the operation.

"It is a blessing to work with like-minded colleagues toward a magnificent goal," he said, adding that many members of his team are in their early 30s, with some having graduated from top schools around the globe.

By the end of 2016, Chen and his team had completed over a dozen major geological experiments and finished building an underground tunnel complex to further study Beishan's geophysical conditions.

On the day the tunnel complex passed its final review, Chen emerged on the surface after climbing up a 149-meter slope.

"It was dusk, and my face was suddenly hit with the warm sunlight," he said. "At that moment, I felt incredible exhilaration, and all the hardship I endured over the years just washed away.

"Happiness is earned, and young people should put their energy, passion and wisdom into meeting the needs of the nation. There will be many challenges along the way, but once you overcome them, the happiness that follows is indescribable."