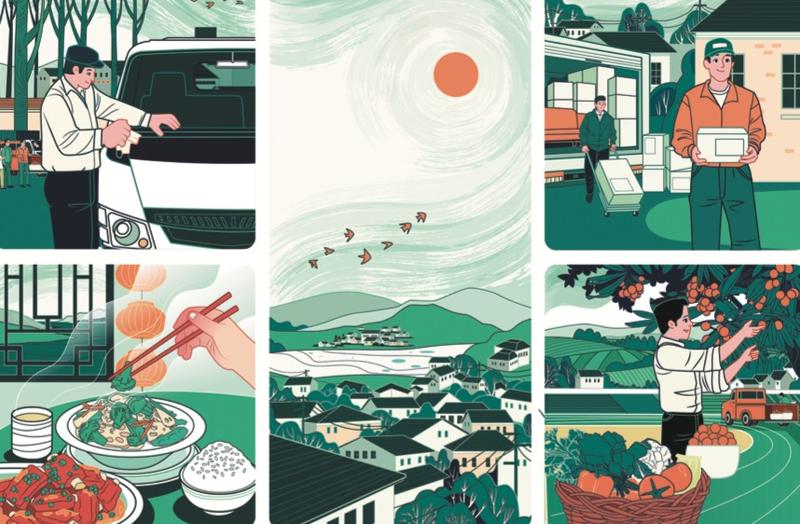 The central government has unveiled a package of new incentives to encourage consumer spending on key products including vehicles, home appliances and furniture, and bolster consumption in the catering sector and in rural areas.

The measures were laid out in a policy document published by 12 government bodies, including the ministries of commerce, industry and information technology and the National Development and Reform Commission, on Jan 5.

To further unleash the potential of the auto market, the government pledged to adjust caps on vehicle-purchasing policies to make more license plates available to urban residents and accelerate steps to develop more parking lots and charging stations for new energy vehicles.

Eligible gas stations will be encouraged to provide services including car maintenance, washing and decoration, while highway service areas will be helped to offer services and higher-quality products.

In promoting consumer spending on home appliances and fixtures, the government said in the document that eligible areas will be encouraged to offer subsidies for the purchase of environmentally friendly white goods and furniture.

It added that the development of recycling systems for waste materials, including those empowered by the Internet Plus strategy, will receive stronger policy support.

It pledged to tap into the consumption potential in counties and rural townships and cancel administrative rules that restrict consumer spending.

The move also stressed the need for demand-side management to unleash the household consumption potential.

In a recent research note, Tommy Wu, lead economist at Oxford Economics, a think tank in the United Kingdom, said the top leadership's emphasis on boosting domestic demand is noteworthy, and China may focus on resolving structural issues such as income inequality, gaps in social safety nets, and the need to rebalance the share of income from businesses to households this year.

According to the National Bureau of Statistics, China's retail sales, a key gauge of consumption, grew by 5 percent year-on-year in November, compared with 4.3 percent for the previous month.

Nevertheless, retail sales for the January-November period declined 4.8 percent year-on-year, an indication that consumption remained a drag on the country's growth drivers.

Demand for services remained weak, with nominal restaurant sales dropping 0.6 percent year-on-year in November, according to the NBS.

To further shore up the catering sector, the government said in the document that more measures will be rolled out to improve service standards in restaurants and widen the range of dishes. It added that businesses will be encouraged to step up cooperation with online platforms.

It pledged to continue with aid packages, including rent reductions and cuts in power bills, for smaller businesses. Financial institutions will continue to scale up support in the form of unsecured loans to small and micro businesses and the self-employed.

Credit support will also be bolstered for consumers purchasing new energy vehicles, green and smart home appliances and water-saving devices, according to a policy document

Credit support will also be bolstered for consumers purchasing new energy vehicles, green and smart home appliances and water-saving devices, according to the document.

Liang Si, from Bank of China's research institute, said continuous support for smaller companies, a policy stance stressed during the Central Economic Work Conference, is important as the economy is still in the recovery stage and many businesses still face operational difficulties.

He noted that consumption of vehicles and home appliances are key underpinnings for the nation's retail sales, and the latest document has rolled out targeted policy measures to contribute to the shaping of an enabling environment for consumer spending.

Policymakers also highlighted the significance of tapping into the rural market, including steps to enable better integration between rural commercial and trading enterprises with e-commerce and to reduce transportation costs.

Retail sales in rural areas accounted for just 14.7 percent of the national total in 2019, according to the Ministry of Commerce.

The government will accelerate the development of services in rural townships and step up law enforcement targeting counterfeit products and price fraud in rural areas to protect consumer rights, according to the document.

Zhao Jinxin, a macroeconomic researcher with the think tank at China Minsheng Bank, said the latest policy document underlines the need to promote the consumption upgrade in rural areas from spending on goods to greater outlay on services.

"However, a fundamental solution to the lack of momentum in rural consumption would be to increase rural residents' disposal income. That would hinge on factors such as a rise in the level of urbanization, the capitalization of rural production elements and improvements in consumer finance coverage," he said.