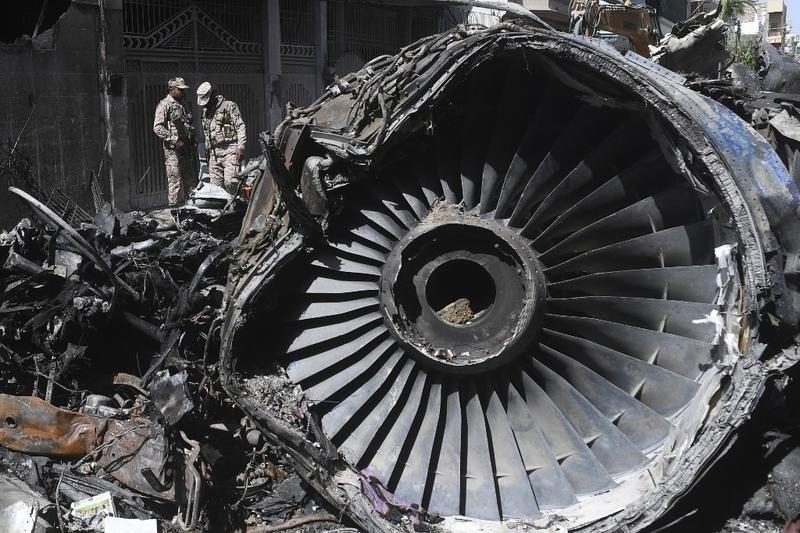 Security personnel stand beside the wreckage of a plane at the site after a Pakistan International Airlines aircraft crashed in a residential area days before, in Karachi on May 24, 2020. (ASIF HASSAN / AFP)

PARIS / KARACHI - Air crash investigators were en route from Pakistan to France on Monday with two ‘black box’ flight recorders of a Pakistani airliner that crashed in a residential area while trying to land in the port city of Karachi last month, airport officials said.

The French agency is involved in the Pakistan-led probe because the crashed A320 was designed by France-based Airbus, and is additionally carrying out the crucial task of decoding the recorders because it has state-of-the-art equipment

An Airbus test plane, unusually commissioned to transport the boxes because of disruption from the coronavirus crisis, was due to arrive on Monday afternoon at Le Bourget near Paris where France’s BEA air accident agency was standing by to open them.

The French agency is involved in the Pakistan-led probe because the crashed A320 was designed by France-based Airbus, and is additionally carrying out the crucial task of decoding the recorders because it has state-of-the-art equipment.

The A320 operated by Pakistan International Airlines crashed short of the runway on May 22, killing 97 people on board after the pilots reported the loss of both engines.

Two passengers survived and there were no reports of casualties on the ground. The crash site remained sealed off on Monday.

BEA experts are expected to open and download information from the boxes - one containing cockpit voice recordings and the other aircraft data - on Tuesday, subject to the recording chips being intact inside their crash-resistant shells.

Initial reports suggested the jetliner scraped its engines along the runway on a first attempt to land following what appeared to be an unstable approach, arriving steep and fast.

Investigators will analyse the cockpit data to try to understand whether damage to the engines from the first landing attempt caused them to cut out before the second attempt, leaving the airplane unable to make it to the airport perimeter.

Experts warn it is too early to say what caused the crash.

In Karachi, as officials continued to try to identify victims’ bodies using DNA samples, families took to social media to voice their grief at not being able to perform the last rites of their loved ones.

The airline said on Sunday problems in identifying victims were caused by delays in DNA identification outside its control.