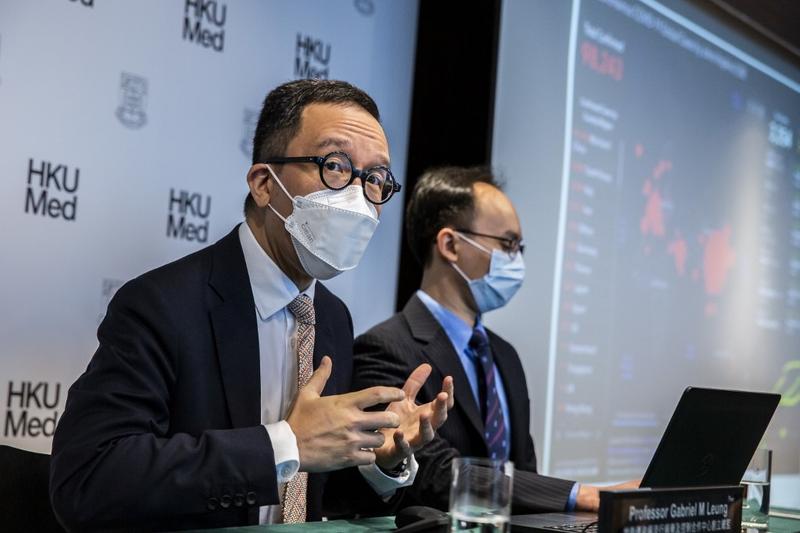 Gabriel Matthew Leung, dean of the University of Hong Kong's Li Ka Shing Faculty of Medicine (left) and professor Joseph Wu from Division of Epidemiology and Biostatistics, School of Public Health, HKUMed speak at a press conference about estimating clinical severity of COVID-19 coronavires amongst symptomatic cases from the transmission dynamics in Wuhan in Hong Kong on March 6, 2020. (ISAAC LAWRENCE / AFP)

HONG KONG - Hong Kong medical experts on Friday revealed their findings that showed the fatality rate of the coronavirus pneumonia was 1.4 percent, much lower than the World Health Organization (WHO) earlier estimate of 3.4 percent.

READ MORE: HK$120b reliefs to put city back on track

Gabriel Matthew Leung, dean of the University of Hong Kong's Li Ka Shing Faculty of Medicine, said in a press conference that their calculation was based on a trusted mathematical model.

Gabriel Matthew Leung, dean of the University of Hong Kong's Li Ka Shing Faculty of Medicine, cautioned that the relatively low death rate of COVID-19 at 1.4% does not necessarily mean Hong Kong should put down its guard

Because the number of cumulative deaths and confirmed cases were flawed, the WHO’s estimate of 3.4 percent was inaccurate.

Leung cautioned that the relatively low death rate does not necessarily mean Hong Kong should put down its guard against the threat of the virus outbreak.

He pointed out that with the rising number of infected cases, the global death toll could increase.

As of Friday morning, more than 98,243 people around the world had been diagnosed with Covid-19 pneumonia and at least 3,354 of the infected had died.

Leung added that the death rate for patients over age 70 is about three times the average. People in this age group are also three times as likely to contract the diseases than the general public. In other words, people aged over 70 are about 10 times more likely to die from the Covid-19 than younger people, he said.

He called on members of the public to maintain an “anti-epidemic lifestyle” by maintaining good personal hygiene and avoid large gatherings.

With current epidemic prevention experience and effective actions, the actual fatality rate in other parts of the world is likely to be much lower in the event of an outbreak, said Leung.