By Jayanth Jacob in New Delhi 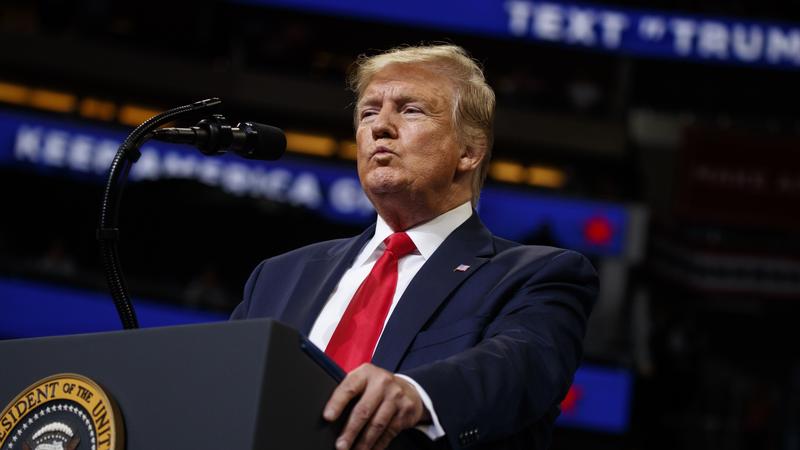 US President Donald Trump speaks during his re-election kickoff rally at the Amway Center, June 18, 2019, in Orlando, US. (EVAN VUCCI / AP)

US President Donald Trump is expected to arrive in India on Feb 24 for a two-day visit to the country. During his visit, Trump expects to address a gathering in Prime Minister Narendra Modi's home state of Gujarat.

Trump’s visit to India has to be seen in the context of political compulsions amid his re-election bid for the US presidency. According to analysts, he hopes to latch on to Modi's popularity and win over a substantial share of Indian American voters in the 2020 presidential polls.

Indian-American voters will total about 1.4 million by November, and the number is enough to signify the coming of age of the Indian diaspora in the United States

Indian-American voters will total about 1.4 million by November, and the number is enough to signify the coming of age of the Indian diaspora in the United States.

"The Indian diaspora in the US have become an integral part of the political and economic fabric of the US,” said Ruby Dhalla, the first Indian and Sikh woman elected to the Canadian parliament.

Dalip Singh Saud paved the way in 1957 as the first Asian American, the first Indian American and the first Sikh American to be elected to the US Congress. Since then, the success of the Indian community in the US has continued. “It is refreshing to see the diaspora in the US trail blazing and achieving new heights," she said.

By numbers alone, Indian-American voters are not an ethnic population that could decide electoral outcomes, Monish Tourangbam, senior assistant professor, department of geopolitics and international relations at Manipal Academy of Higher Education said.

READ MORE: Modi says India will accord memorable welcome to US president

But he pointed out that they make up one of the most successful ethnic groups in the US, accounting for one of the highest median incomes in the country. More recently, the community has emerged as a substantial source of funding for both political parties. Gujaratis constitute 20 percent of Indian Americans. 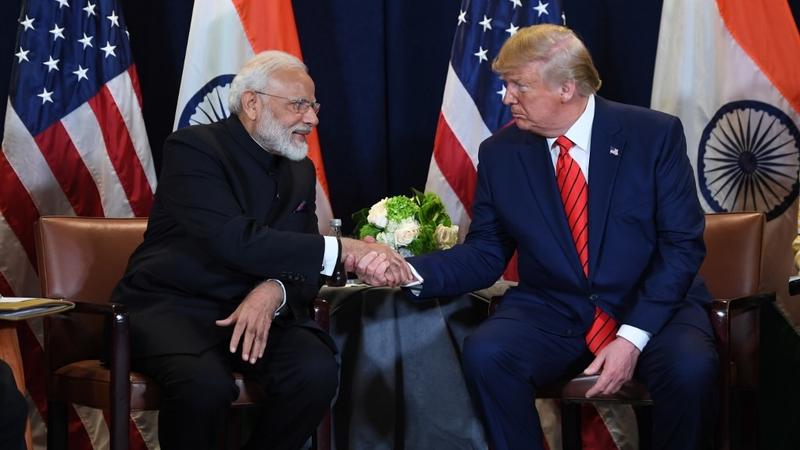 In this file photo taken on Sep 24, 2019 US President Donald Trump and Indian Prime Minister Narendra Modi hold a meeting at UN Headquarters in New York, on the sidelines of the United Nations General Assembly. President Donald Trump will visit India, with stops in the capital New Delhi and the western state of Gujarat, from February 24-25, the White House announced Feb 10, 2020. (SAUL LOEB / AFP)

"Make no mistake, the Howdy Modi event in Texas (in September last year) and the (upcoming) Namaste Trump rally in Gujarat are as much about the presidential elections in the United States as they are about the India-US bilateral relationship,” he said.

Trump heaped praise on the Indian community when he addressed a public event with Modi at Houston in September. His speech acknowledged the importance of the Indian-American community. "You enrich our culture. You uphold our values. You uplift our communities,” Trump had said in a city with roughly 150,000 Indian Americans.

The size of the Indian-American community alone does not explain the significance of the effusive praise from Trump. It also has to do with the voting pattern in the last US presidential election as well as the likely turnout of voters in the 2020 polls.

Many analysts believe four US states – Pennsylvania, Michigan, Wisconsin and Florida – are most likely to determine the outcome of the presidential election in 2020.

"The margins of Trump’s victory (in 2016) in these states were very less. Margins such as 10,000 or 11,000 votes force you to reach out to every demographic group. Even the smaller ones too matter,” said journalist Varghese K. George, and author of the book Open Embrace: India-US ties in the age of Modi and Trump.

“President Trump believes that he could swing a large number of Indian-American voters in his favor though they had overwhelmingly voted for his opponent Hillary Clinton in 2016," George said.

He said Indian Americans are increasingly happy about Trump, especially his "supportive position on Kashmir issue," although Trump singled out India on trade issues and showed apathy for the immigrant workers in general.

"Of late the Indian diplomatic outreach too gives an impression that it is getting closer to the Republicans."

Electoral demography often goes beyond aggregate statistics as the US presidential election is not decided by popular votes. In 2016, Clinton had polled 3 million votes more than Trump. But US presidents are chosen by the electoral college which has 538 votes. A candidate needs to win 270 votes.

Moreover, said Pawan Dhingra, professor of American Studies, Amherst College, in the US, "There is a great affection for Modi among many – not all –- Indian Americans, especially Hindus, but that does not translate into a similar affection for Trump".

Dhingra argued that Trump has proven unsympathetic to immigrants from all across the world, including those on H-1B visas. But a positive message on Trump from Modi could still make a difference.

Journalist and author George also believes that the influence Modi has over Indian Americans "can go a long way" to help Trump electorally.

But Dhingra is not all that hopeful. "Even if Modi makes a compelling case that Trump will help him to strengthen India, I do not think most Indian Americans will vote for him," Dhingra added.

Once in office, he also appointed a host of Indian Americans to important posts. This includes the appointment of Nikki Haley as the US permanent representative to the United Nations, Ajit Pai as chairman of the Federal Communications Commission, and Seema Verma as administrator of the Centers for Medicare and Medicaid Services.

Thus, as US presidential elections warm up, it no wonder that Indian-American voters have become an important part of the diplomatic agenda between the two countries.

The writer is a New Delhi-based journalist.