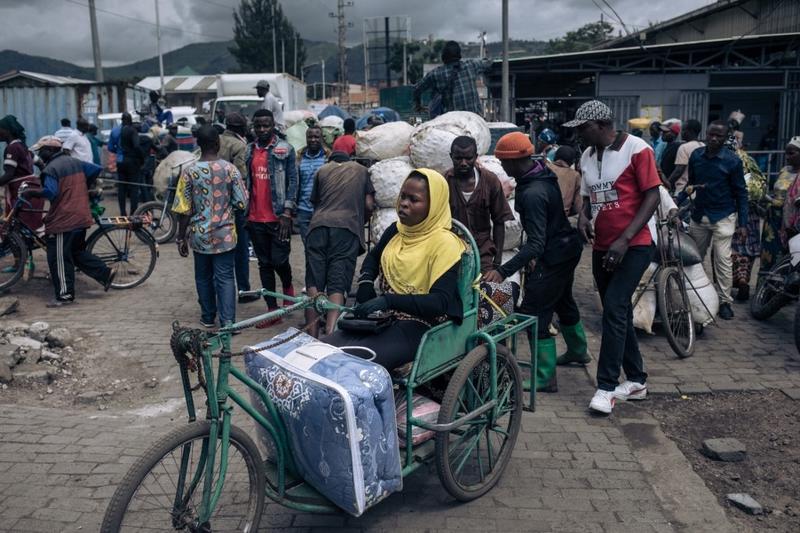 In this Nov 19, 2022 photo, traders on tricycles cross the border between Rwanda (in the background) and the Democratic Republic of Congo (DRC) at the Petite Barrière border post in Goma. DRC and Rwanda traded accusations on Jan 24, 2023 after a fighter jet from the DRC was allegedly attacked while landing in Goma. (PHOTO / AFP)

KINSHASA – The Democratic Republic of the Congo (DRC) and Rwanda exchanged accusations on Tuesday after a fighter jet from the DRC was attacked during its landing, the latest dispute between the two neighbors whose relationship has soured due to a rebel insurgency.
In a statement, Congolese government spokesman Patrick Muyaya condemned the attack against a Sukhoi-25 fighter jet and rejected Rwanda's accusation that the aircraft was in Rwandan airspace.

Earlier on Tuesday, Rwanda blamed the Congolese fighter jet for violating its airspace "for the third time," which prompted Kigali to take "defensive measures"

"Rwandan fire was directed at a Congolese aircraft flying over the Congolese territory. It did not fly over Rwandan airspace in any way," he said, adding that the incident occurred around 5:00 p.m. local time (1600 GMT) in Goma, capital of the northeastern North Kivu Province.

"The aircraft landed without major material damage," the statement said.
Earlier on Tuesday, Rwanda blamed the Congolese fighter jet for violating its airspace "for the third time," which prompted Kigali to take "defensive measures."
"Rwanda asks the DRC to stop this aggression," said a press release from the government spokesperson's office.
Tension between the two countries has escalated since fighting resumed between M23 rebels and DRC government troops in North Kivu.
The DRC accuses Rwanda of backing M23 rebels, while Rwanda denies the charge.

Rwanda has also accused the Congolese army of using heavy weaponry to target Rwanda's border zone in the renewed fighting.
For several weeks, M23 rebels, deemed as "terrorists" by the DRC government, have been trying to advance in Masisi, a town in North Kivu. Intense fighting has left thousands of civilians homeless in the region.