A show where nature takes the lead role 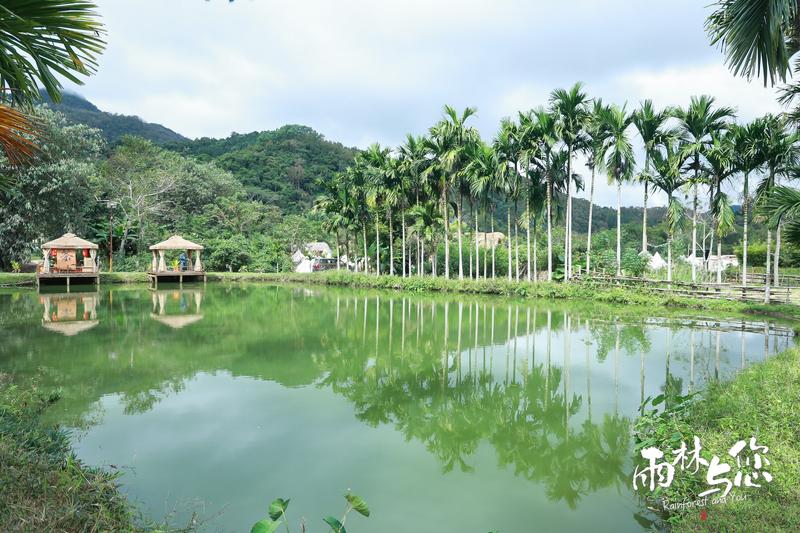 Water flowing, birds whistling and leaves rustling, a woman moves around a thatched cottage to the accompaniment of rainforest sounds as she narrates, "The lofty Wuzhi Mountain is home to generation after generation. It is also a paradise for all living creatures. ... I have totems tattooed on my skin and songs that have been sung for thousands of years running through my veins."

This is the opening scene of Rainforest Time, a large-scale idyllic live performance, which debuted on Nov 13 in Maona village of Shuiman township in the city of Wuzhishan, Hainan province.

The audience will be impressed by the strong visual contrast between the green mountains and clear waters of the tropical rainforest. ... With the charm of local music and beautiful choreography, the audience can get to know the history and culture of this land.

The show, lasting for about 70 minutes, consists of five parts — nature, inheritance, harvest, coexistence and gratitude. With music, dance, real-life settings and other art forms, it aims to perform and interpret three key concepts: "rainforest and mountains and rivers", "rainforest and ethnic groups" and "rainforest and village".

In the show, actors present the beauty of the sun, the moon, mountains, rivers, flowers, birds and trees that contribute to a sustainable, green lifestyle, as well as the Li and Miao ethnic groups picking tea and planting rice, showing their awe of, and gratitude to, nature.

"The audience will be impressed by the strong visual contrast between the green mountains and clear waters of the tropical rainforest and the ethnic costumes featuring black and red," says Lin Qing, director of Rainforest Time. "With the charm of local music and beautiful choreography, the audience can get to know the history and culture of this land."

One member of the audience was impressed. "The scenes of daily life and work that I have seen since I was a child are presented onstage," says Zhuo Shuyan, a woman in her 30s, from Shuiman township. "This is the show we locals want to see. It shows our harmonious coexistence with nature. The confidence in our ethnic culture is definitely boosted."

Since November last year, the show's production team has done thorough research on the cultural elements of the Li and Miao ethnic groups in Hainan. For example, many of the costumes featured in the performance are inspired by patterns of traditional Li brocade-weaving, according to Lin.

As well as creating an original soundtrack for the show, the production team also adapted classic local songs about Wuzhi Mountain, such as The Five Rivers of Wuzhishan, I'm Wuzhishanese and I Love Wuzhi Mountain, I Love Wanquan River. "With the classic lyrics, we want to arouse the pride and glory of Wuzhishan residents, enabling more people to learn about the area and its locals," Lin says.

Constant revisions have been made since official rehearsals started in July. The woman's narration in the opening scene has been rewritten more than 20 times, and the production team has drawn more than 800 sketches for the show's venue and actors' positions, according to Lin.

The site is located at the foot of Wuzhi Mountain. 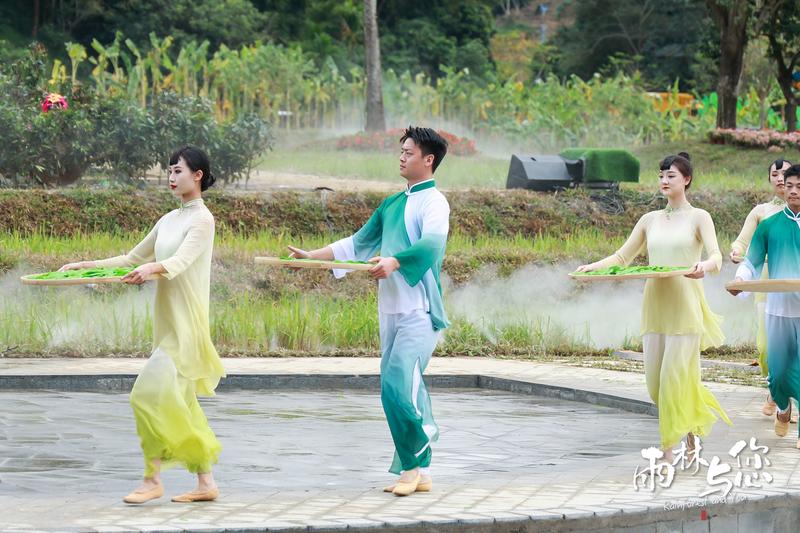 Performers demonstrate the harvesting of tea leaves in the show, which takes place in the daytime, to save the cost of lighting and stage effects. (PHOTO PROVIDED TO CHINA DAILY)

To save the cost of lighting and stage effects, the show takes place in the daytime. However, this can be "very challenging", according to Lin, as it means "there is no cover for possible mistakes".

Briton Bob Myerscough, 72, who lives in Wuzhishan city, was among the audience. He was "impressed and surprised" by the show, he says. "When you do music outside, it's not easy. It's like if you march in the army and you are behind the band, you'll hear the 'boom, boom, boom' of the drums. But the further away you are, the bigger the delay in the beat of the drum — but you still need to stay in step with it. So the actors did a very good job in such a large venue. The show is very well put together."

There are 50 professional actors and 430 extras in the cast. "Most of the actors are ordinary people selected from the local square-dancing groups," Zhang Huawei, deputy secretary-general of Hainan provincial government, said in the show's opening speech. "It is a down-to-earth event where people perform, people watch, and people enjoy."

It was quite tough to get all the extras to adapt to the production team's arrangements. The extras are not physically fit enough to run across the entire venue like the professionals. It took them months to reach the required level, although the movements had been already adjusted to match their physiques.

Zhao Liye, 68, an extra, says that all the actors practiced every two days from 8 pm to 9:30 pm, be it rainy or windy. For an elderly man like himself, he had to overcome many difficulties. But for him, "it's a great honor to be a member of such a great show".

The extras practiced often, and in every corner of Wuzhishan. Some in the rice fields, and others in public squares. They shed blood, sweat and tears but stuck together for the show. "When you watch the show, you'll find their smiles and movements are very expressive," Lin says. "I can say the show is composed by gestures of hard work. It is because of these people that everything is possible."

More to see and enjoy

The performance is part of the five-year provincial activity Rainforest and You. Until the end of this year, more than 10 sub-activities surrounding Hainan Tropical Rainforest National Park will be held, including nature education, forest therapy, leisure and vacation, sports events, ecological science popularization and wildlife sightseeing.

"Via Rainforest and You, we want to help people at home and abroad understand the role, function and beauty of rainforests, and motivate them to join in and support their protection," says Zhou Yadong, chief engineer of the Forestry Department of Hainan Province. "The activity helps to cultivate Hainan Tropical Rainforest National Park's culture, spread the concept of our park, and comprehensively display the achievements of tropical rainforest protection and our national park's construction."

The event debuted in Wuzhishan also because "the city's government has a great awareness of protecting its local ecosystem, and takes effective actions", Zhou adds. "While protecting the rainforest, it also guides locals to take a development path of ecological agriculture."

Maona village of Shuiman township is known as a successful example of combining environmental protection with ecological economic development.

Zhang says: "It is of great significance to display the coordinated development results of rainforest ecological protection and rural vitalization, as Hainan is building itself into a national pilot zone for ecological conservation."

"We sincerely welcome more people to visit Wuzhishan," says Yu Qian, head of Wuzhishan city's publicity department. "Here you'll be far from bustling crowds, walk among mountains and rainforests, experience an exclusive tour, get a closer look at Wuzhishan, and know why it's known as an 'emerald jade city'."

"Hainan is about not only blue sky, white clouds and beautiful beaches, but also the magnificent and mysterious rainforest," says Yang Haidi, author of This Beloved Land: Hainan Tropical Rainforest National Park, who attended the show, Rainforest Time.