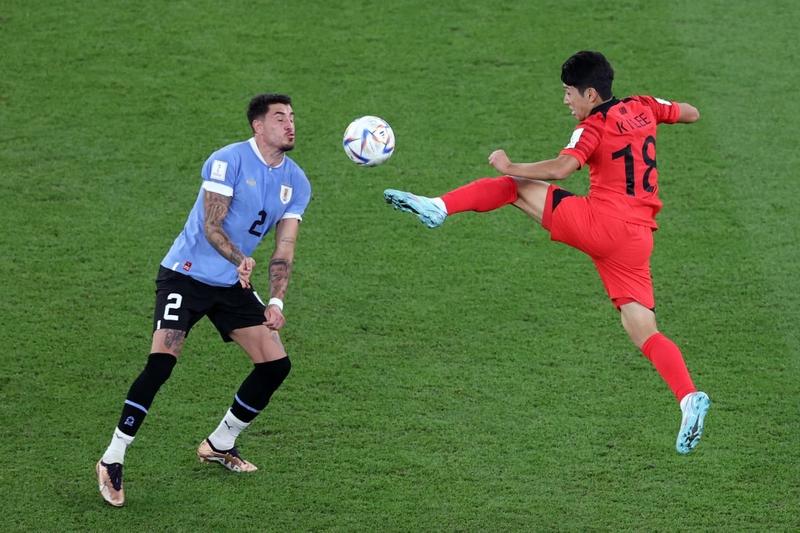 AL RAYYAN, Qatar - Uruguay weathered an energetic early storm from a lively South Korea side that pressed relentlessly in the opening 15 minutes, calling on all of their experience to secure a scoreless draw in an opening World Cup Group H game that they should have won.

Kicking off their campaign at the Education City Stadium, the two teams came into the tournament with solid defensive reputations, but the Uruguayans did a better job of solving the South Korean puzzle, hitting the woodwork twice.

Kicking off their campaign at the Education City Stadium, the two teams came into the tournament with solid defensive reputations, but the Uruguayans did a better job of solving the South Korean puzzle, hitting the woodwork twice

The Korean press looked like paying off early on but an over-reliance on Heung-min Son had his team mates searching for their talismanic forward, rather than taking a more direct approach when they won the ball high up the field.

Once Uruguay got to grips with the aggressive style of their opponents, they created the first real clear-cut chance as Federico Valverde cushioned a long ball to control it before firing a looping shot high and wide of the goal.

With the Koreans settling into a 4-4-2 formation to conserve energy, Uruguay captain Diego Godin started dictating the play from his centre back position in his 160th international, pinging long, raking diagonal passes in behind the Korean full backs for his team mates to run on to.

Outside him Martin Caceres, 35, shackled Son, harassing the South Korean winger any time he got the ball and sticking close to him to discourage others from passing his way.

Up front Luis Suarez, also a year younger than Godin at 35, tormented the Korean defence with his angled, bustling runs as he tried to open up space for Uruguay to exploit.

Godin had the best chance of the game in the first half, heading the ball against the foot of a post from a corner, and as the game wore on, the collected experience of the South Americans started to tell.

Edinson Cavani, also 35, came on for Suarez and he posed a different set of problems for the South Koreans, pinning them back and restricting them to the odd late counter-attack. The Uruguayans almost scored what would have been a deserved late winner when Valverde hit a post.

With a point in the bag and Godin in the groove, they will be confident that they can repeat this kind performance against Portugal and Ghana - add in some goals and it might well be enough to take them through to the last 16.