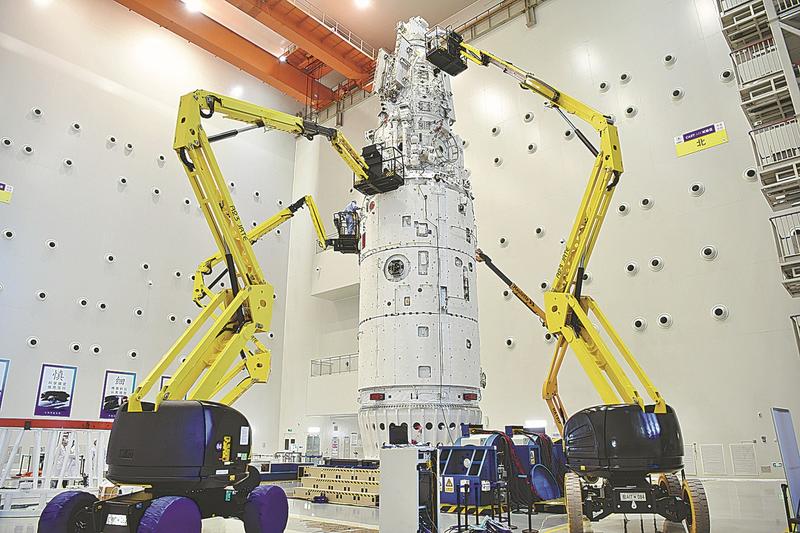 The Wentian space lab, shown as it was being assembled, is expected to advance space science, technology and research applications. (THE CHINA ACADEMY OF SPACE TECHNOLOGY)

Xia Guangqing, dean of the School of Aeronautics and Astronautics, Dalian University of Technology, shared the fantasy of plasma, one of the four fundamental states of matter. Cheng Cheng, lecturer from the College of Material Science and Technology of Nanjing University of Aeronautics and Astronautics, introduced five world-changing materials and the science behind them.

They explained complex aerospace science knowledge to the public in a simple and understandable way, so as to enhance people's awareness and interest in aerospace science and applications, as well as inspiring more young people to chase dreams in innovative technology field.

The lecture is part of the "China Aerospace Dream" series activities, which is jointly held by Inspire (HK) Youth Education Foundation and GBA DG-HK Elite Association to celebrate the city's 25th anniversary of its return to China

The lecture is part of the "China Aerospace Dream" series activities, which is jointly held by Inspire (HK) Youth Education Foundation and GBA DG-HK Elite Association to celebrate the city's 25th anniversary of its return to China. The activities started in August and will last until December. On Aug 20, they held the first online class on space breeding and space science experiment.

Founder and Chairman of InspireHK Lee Tsz-fung, who also is the initiator and chief planner of the series activities, said over 500 people attended the first similar lecture held in the series. Saturday's lecture was the second of such activities.

Lee told China Daily that a total of five such lectures are planned until December.

Besides online classes, the activities also include two competitions to test participants' aerospace knowledge and collect articles on aerospace topics. An award ceremony of the competitions will be held in December in Hong Kong.

Lee also expressed hope to host some exchange tours to allow students to visit some space bases and launch centers and meet the aerospace experts and astronauts in person in the future.

He said these opportunities will aid the city's youngsters to tell China's stories well and help raise the talents needed forthe city on its way to become an inno-tech hub.

Yuen Yan-kai, chairperson of GBA DG-HK Elite Association, said this is a good opportunity for the public to learn space science knowledge from space experts in an understandable way. She also called on more people from all walks of life to pay more attention to and participate in the upcoming space science education-themed activities.