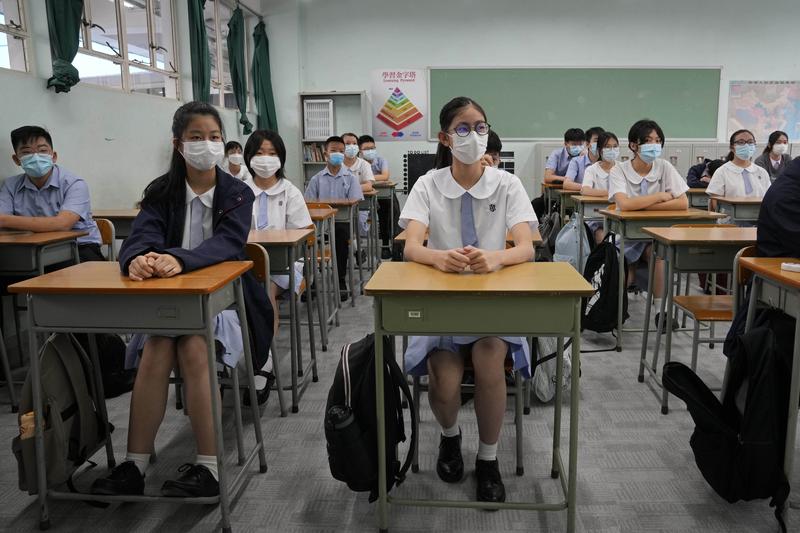 Students sit in a classroom during the first day of the new academic year at a secondary school, in Hong Kong, Sept 1, 2021. (KIN CHEUNG / AP)

Public primary and secondary schools in Hong Kong will begin a series of joint school activities in the 2022/23 school year to cultivate students’ affection for Hong Kong and the country, with 65 government schools the first to launch events, the city’s Education Bureau revealed on Friday.

The announcement of the yearlong school serial events, under the theme of “Love Our Home, Treasure Our Country”, is also in celebration of National Day on Oct 1, the bureau said.

Lam said fostering and strengthening law-abiding awareness of young people is a key element to enable them to thrive. Through the cross-school activities, he said he hopes to give young people a better understanding of the three most important laws for Hong Kong, namely the Constitution, the Basic Law and the National Security Law for Hong Kong.

Through the cross-school activities, Secretary for Justice Paul Lam Ting-kwok said he hopes to give young people a better understanding of the three most important laws for Hong Kong, namely the Constitution, the Basic Law and the National Security Law for Hong Kong

Speaking at the same event, Secretary for Education Choi Yuk-lin said educators have a responsibility to lead the younger generation to develop correct values and attitudes, so as to help them respect the system of their country and develop a comprehensive concept and awareness of national security.

In the upcoming National Day, Choi said she expects students to participate in various forms of celebrations, thereby strengthening their sense of national pride and belonging.

All government schools should roll out both school-based activities and joint school activities for national education in the current school year, Choi said, adding that the events should also be in accordance with the National Education - Event Planning Calendar issued by the bureau in August.

According to the calendar, schools are supposed to organize national education every school year, including raising of the national flag on important dates, holding competitions about the Constitution and Basic Law, and watching patriotic films.

The bureau also encourages non-governmental schools to organize similar joint school national education activities according to their vision and characteristics.