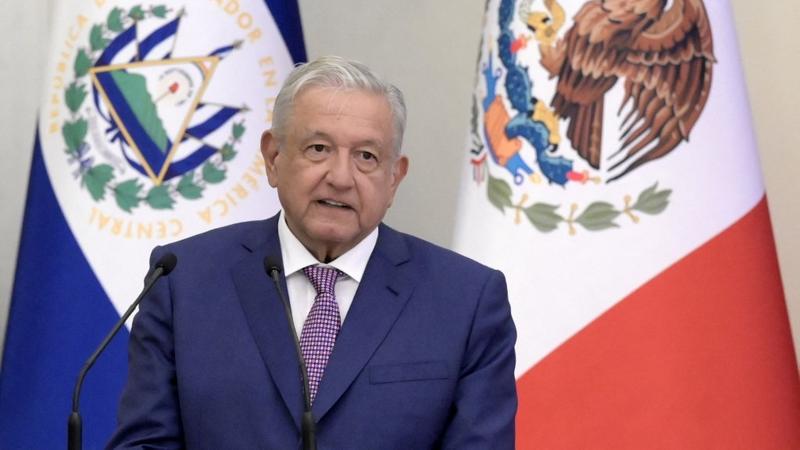 Mexican President Andrés Manuel López Obrador speaks during a joint press conference offered with his Salvadoran counterpart Nayib Bukele (out of frame) at the Presidential House in San Salvador on May 6, 2022. (MARVIN RECINOS / AFP)

MEXICO CITY - President Andres Manuel Lopez Obrador is facing a flood of criticism after Mexico's navy lent a military helicopter to fly in his home team's mascot at a major baseball playoff during a week of violent unrest elsewhere in the country.

Pochi, the Olmecas de Tabasco club's mascot - clad in a full-body turtle costume - followed military personnel out of an Airbus Panther helicopter that landed in the middle of a stadium in Tabasco state, surprising fans who had come to see the Mexican Baseball League game on Thursday.

Lopez Obrador criticized the decision, even as it remained unclear who had signed off on it.

"I do not agree with it," Lopez Obrador, who has prioritized austerity measures like trying to sell the country's presidential jet, told journalists at a morning press conference.

But Lopez Obrador, who hails from the nearby city of Macuspana, went on to praise the passion for the sport and recalled his wife enjoying jets that flew over an All-Star game they attended in San Diego.

"You shouldn't use US planes during All-Star Games either," he said.

The navy issued a statement in the afternoon confirming the participation of "an air unit, an escort, a war band, a marching band and naval personnel."

It said it was pleased to participate in civic and sporting events which bring it closer to society across the country and "exalt patriotic values".

Various critics took to social media to slam the president after a week of violent attacks linked to organized crime.

READ MORE: Presidents of US, Mexico to meet after summit tensions

"What a day of terror citizens have lived through, former Hidalgo governor Francisco Olvera said on Twitter, a day after deadly riots shook the border town of Juarez. "What is the president doing? Justifying it and talking about baseball."

"Who would become a baseball mascot so the president lends us a helicopter for our missing person search brigades?" asked Ceci Flores, the founder of an organization of mothers looking for people reported missing amid the widespread violence.

More than 100,000 people have been reported missing in Mexico since 1964, the vast majority since 2006 when the then president declared a war on drug trafficking and organized crime.