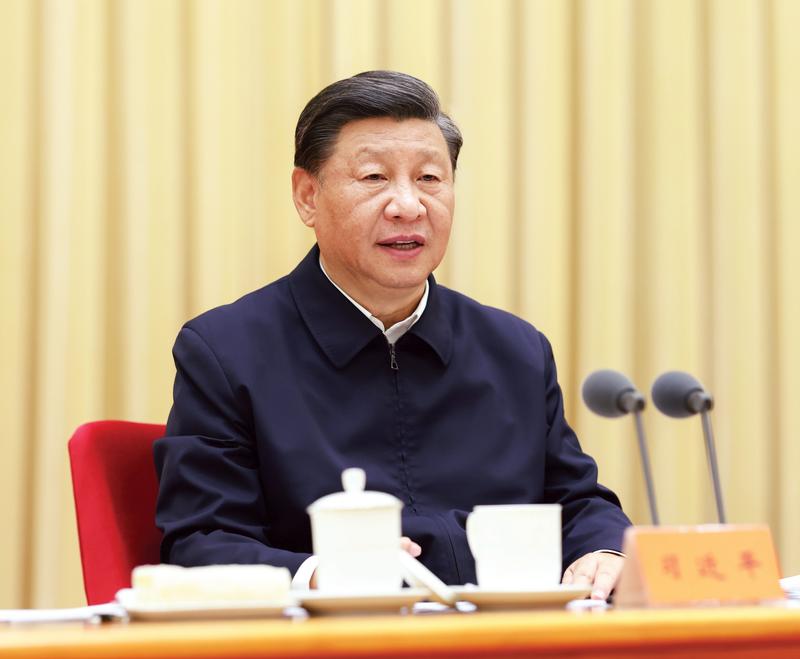 General Secretary of the Communist Party of China Central Committee Xi Jinping, who is also Chinese president and chairman of the Central Military Commission, delivers an important speech at the opening ceremony of a study session of provincial and ministerial-level officials. The study session was held from July 26 to 27 in Beijing. (JU PENG / XINHUA)

Xi Jinping, general secretary of the Communist Party of China Central Committee, has underlined the need for the whole Party to strengthen risk awareness, prepare for the worst-case scenario, and strive to cope with the changing domestic and international situation with proper strategies on the new journey of realizing national rejuvenation.

Xi, who is also China’s president and chairman of the Central Military Commission, made the remarks at the opening of a symposium held in Beijing on July 26 and 27 that was attended by senior Party and government officials.

The symposium came as the 20th National Congress of the CPC will be held later this year. Li Keqiang, Li Zhanshu, Wang Yang, Wang Huning, Zhao Leji and Han Zheng, who are all members of the Standing Committee of the Political Bureau of the CPC Central Committee, and Vice-President Wang Qishan also attended the meeting.

Xi said that the upcoming 20th National Congress of the CPC will work out a blueprint for the two-step strategy that aims to enable the country to achieve basic national modernization by 2035, and then to turn China into a great modern socialist country that is prosperous, strong, democratic, culturally advanced, harmonious and beautiful by the middle of this century. It will lay emphasis on the strategic tasks the Party will have and the major steps it will take over the next five years, which hold the key to the nation’s modernization endeavors, he said.

Xi said that efforts must be made to work out new plans and measures to address the problem of unbalanced and inadequate development nationwide.

Noting that there is no one-size-fits-all standard for modernization in the world, Xi said that China is pursuing socialist modernization led by the CPC, with the aim of advancing the great rejuvenation of the Chinese nation.

During this process, “we must never retrace our steps to the rigidity and isolation of the past, nor should we take the wrong turn by abandoning our mission or system”, he stressed, adding that the destiny of China’s development and progress must be held in its own hands.

Saying that the upcoming 20th National Congress of the CPC is critically relevant to the prospects of the Party and the State as well as the future of socialism with Chinese characteristics, Xi emphasized that it is greatly important to make clear what banners the Party will hold, what path it will take, what goals it wants to achieve and how it will achieve them, in order to unite and encourage all the Chinese people to strive for the new victory of socialism with Chinese characteristics.

Xi mentioned the rapid evolution of profound changes in the international landscape, saying that the nation faces fresh strategic opportunities and tasks in the new stage of development, and in the meantime, the risks, challenges and problems faced by China are increasingly complex. He called for stronger determination for the whole Party to improve the ability to struggle for victories, saying that “the most important thing for us is to manage our own business well”.

On the way forward, the whole Party must adhere to the fundamental purpose of the Party to wholeheartedly serve the people and have a strong bond with the people, Xi added.

Representatives from non-Communist parties and the All-China Federation of Industry and Commerce also attended the opening of the symposium.