Fresh policies give infrastructure a boost

By Zhong Nan and Zhuang Qiange 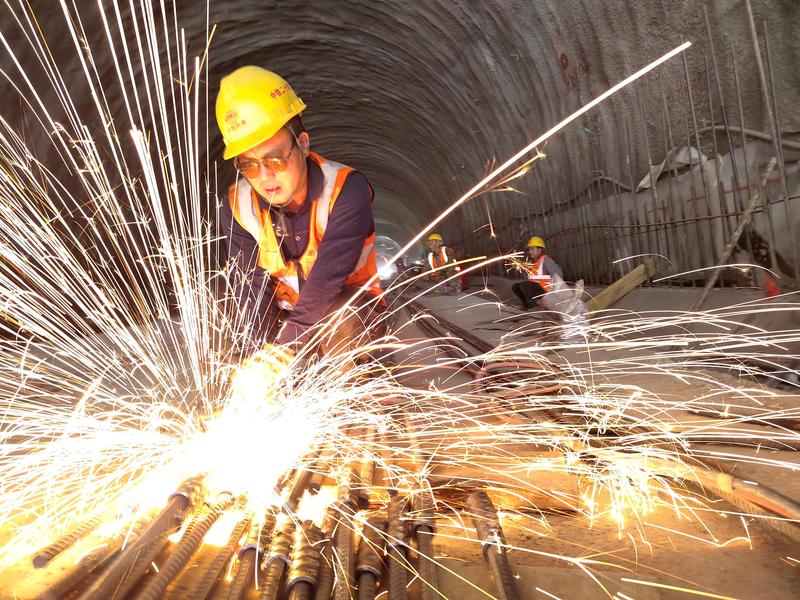 With China introducing fresh fiscal policies and investment packages to sustain its economic growth, State-owned enterprises involved in the infrastructure sector are accelerating their construction pace of major projects related to the country's 14th Five-Year Plan (2021-25) across the country to create more jobs and business opportunities.

A key livelihood and transportation project in East China's Zhejiang province, Shaoxing Subway Line 2, announced the installation of the cap for the Hainan Road Station, which is a milestone as it represents success amid numerous challenges by its builder－China Railway 24th Bureau Group Corp Ltd－a unit of State-owned China Railway Construction Corp Ltd, laying a solid foundation for an earlier-than-anticipated opening of the subway line.

With the completion of the final construction phase, the station becomes the first one of its kind domestically built on soft soil ground while being able to carry out train maintenance work, which is rarely seen in the sector as such geological conditions are usually deemed as unfit for long-time train stoppage.

Despite few examples to follow in this project, the builder managed to come up with various solutions, including ground consolidation and extra base-supporting measures, to accomplish the station's body.

According to the builder, in the first phase of the Line 2 project, the underground pathway has a total length of 10.55 kilometers, with nine stations planned alongside it.

Answering the overall push nationwide in infrastructure, China Railway 24th Bureau has been ramping up its efforts in infrastructure nationwide, regardless of the headwinds of the recent COVID-19 resurgences, including the recent completion of the tunneling work of the second highway linking Chongqing municipality with Hunan province.

The builder said the tunneling work that took more than a year in mountainous areas in Chongqing is a key achievement as the project demands many tailored solutions in handling the complicated construction conditions underneath.

The highway, with a total length of 280 km, is also a livelihood project aimed to help ease highway transport pressure and tap local tourism potential, the builder said.

In addition to capping the core tube of the Shandong International Financial Center, the tallest building in Shandong province, in the provincial capital of Jinan, and delivering a hotel project in Dubai, the United Arab Emirates, earlier this month, China State Construction Engineering Corp (CSCEC) announced that it had entered the stage of above-ground structure construction for the terminal building of the east terminal project, a part of the Xi'an Xianyang International Airport Phase III Expansion Project this month, in Shaanxi province.

Once completed, the project will meet the needs of annual passenger throughput of 83 million times, and a cargo and mail throughput of 1 million metric tons, said Zhou Yingjie, deputy general manager of the northwest branch of China Construction Eighth Engineering Division Corp Ltd, a subsidiary of Beijing-based CSCEC and the project's contractor.

It will comprehensively improve infrastructure support capacity and operational efficiency of Xi'an Xianyang International Airport, and support the construction of an "international aviation hub", he noted.

These big-ticket infrastructure projects will not only create a more physical workload and new businesses in the coming years, but also generate business orders in both upstream and downstream areas, in particular in the building materials, steel and transportation sectors, as well as stabilize the expectations of small and medium-sized enterprises, said Liu Xingguo, a researcher at the China Enterprise Confederation in Beijing.

With many provinces and regions attaching great importance to "new infrastructure", new urbanization, and major projects such as transportation and water conservancy, it will inject vitality into China to maintain healthy growth for the long run, and create platforms for private companies to invest, he said.

SOEs are also set to recruit more university graduates this year amid efforts to bolster employment, according to the State-owned Assets Supervision and Administration Commission of the State Council.

The commission, at a meeting on graduate employment, held earlier this month, urged all central SOEs to expand their current recruitment and talent pool to create more job opportunities. While strengthening online and offline recruitment, these SOEs should launch their summer recruitment drives as soon as possible, the commission said.

China is expected to see a record 10.76 million new graduates from the country in 2022, marking a year-on-year increase of 1.67 million, according to the Ministry of Education.