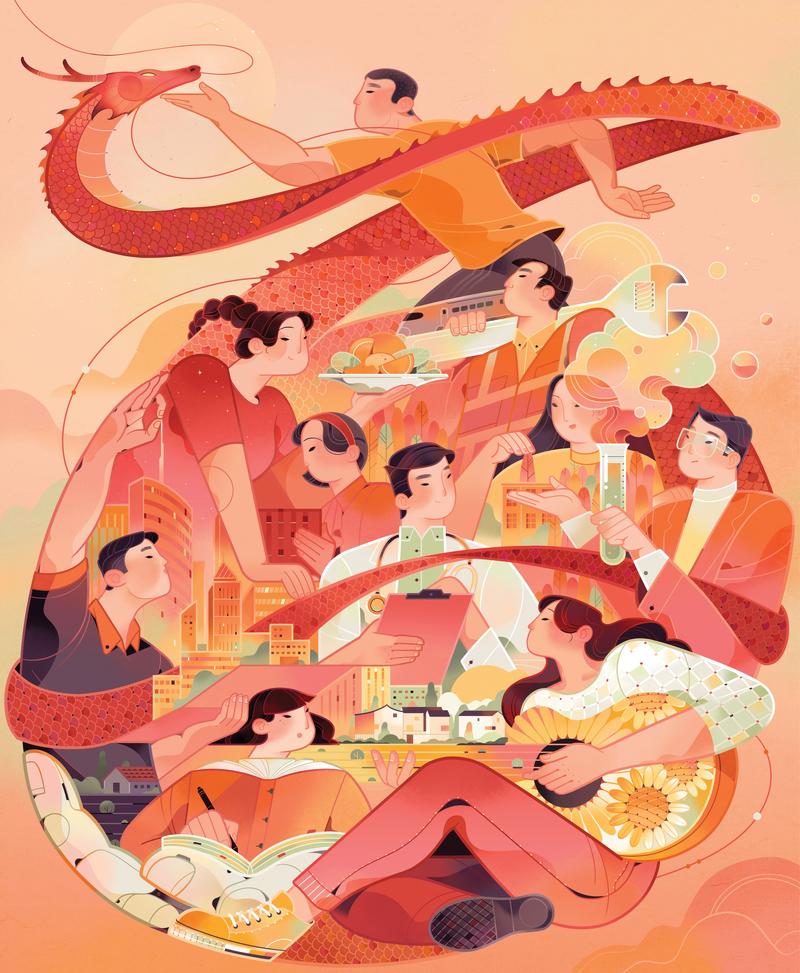 Ahead of National Youth Day, which was celebrated on May 4, groups of students visited a key site in downtown Beijing to commemorate a patriotic mass student movement formed a century ago.

The students headed to the Red Building, a four-story structure named after its red-brick walls and tiled roof, which used to stand on the main campus of Peking University.

The building was the setting for early Communist revolutionary activities, and a century ago, a group of young progressives pledged themselves to Marxism there and searched for ways to rejuvenate the Chinese nation.

The site became a cradle of the May Fourth Movement of 1919, which was formed on that date when about 3,000 university students in Beijing became its main force in opposing imperialism and feudalism.

The May Fourth Movement spurred the spread of Marxism in China, particularly among the young people. In 1922, the Communist Youth League of China was established, and this year marks its centenary.

The building now hosts a display of cultural relics, photographs and graphics in rooms on the former campus to illustrate how the revolutionary story unfolded in Beijing during the early 20th century.

In one of the rooms, Zhang Xiaojun, a 20-year-old freshman, used her phone to take videos of photos and sculptures of young figures from the May Fourth Movement, sharing this footage with her classmates.

“These young students from the past were great. Of course, we young people in China today have our own strengths, as we are innovative, ambitious and also willing to devote ourselves to such causes,” she said.

Zhao Qingyang, 44, a Communist Party of China member who works in Beijing, took his 10-year-old daughter to the exhibition twice recently, as he wants her to gain inspiration from such pioneering figures.

“At a difficult time in history, many visionary people spontaneously formed the Marxist belief, which supported them in founding a new China,” he said.

Zhao added that members of the younger generation today also hold promise, as many of them play vital roles in fighting the COVID-19 pandemic and in relief work after natural disasters. 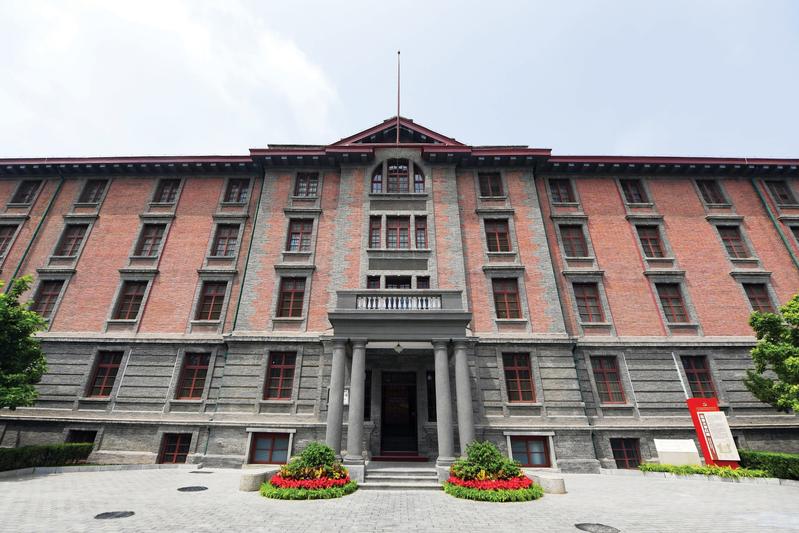 On April 30, 2019, Xi Jinping, general secretary of the Communist Party of China Central Committee, said in a speech at a ceremony in Beijing to mark the centenary of the May Fourth Movement that young Chinese are always in the vanguard of the drive to rejuvenate the nation.

He said the 100 years since the May Fourth Movement was founded have witnessed the continuous struggle of generations of young Chinese, adding that they have devoted themselves to the great cause of revolution, development and reform led by the Party.

Xi has on several occasions called on young people to establish great ideals, love their country, bear responsibilities and promote the spirit of the arduous struggle in the new journey toward the great rejuvenation of the Chinese nation.

Hao Ruiting, a professor of youth movement history from the Central School of Communist Youth League of China, said the May Fourth Movement reflected the strengths of young people and prompted them to pursue truth and progress.

The movement also paved the way for the founding of the Communist Party of China and the Communist Youth League of China, or CYLC, he said.

In 1919, the May Fourth Movement spurred the spread of Marxism throughout the country. Two years later, the CPC was founded, and the following year, under the Party’s leadership and promotion, the Communist Youth League was born.

On May 5, 1922, the League held its first National Congress in Guangzhou, Guangdong province, with 25 members attending the meeting representing 5,000 others from across the country.

The League was founded on the 104th anniversary of Karl Marx’s birth. Hao said, “This had an important implication — that it was a revolutionary group that believed in Marxism.”

According to the League’s Constitution, it is a mass organization for advancing young people under the leadership of the CPC. It also acts as a school, where a large number of young people learn about socialism with Chinese characteristics and about communism through practice. The League also assists the Party and acts as a reserve force for it.

As of Dec 31, the League had more than 73.7 million members nationwide, according to statistics released by the CYLC Central Committee on May 2.

Some 43.81 million of its members are students, while the rest are from enterprises, public institutions, urban and rural communities, social organizations and other spheres, the data show. 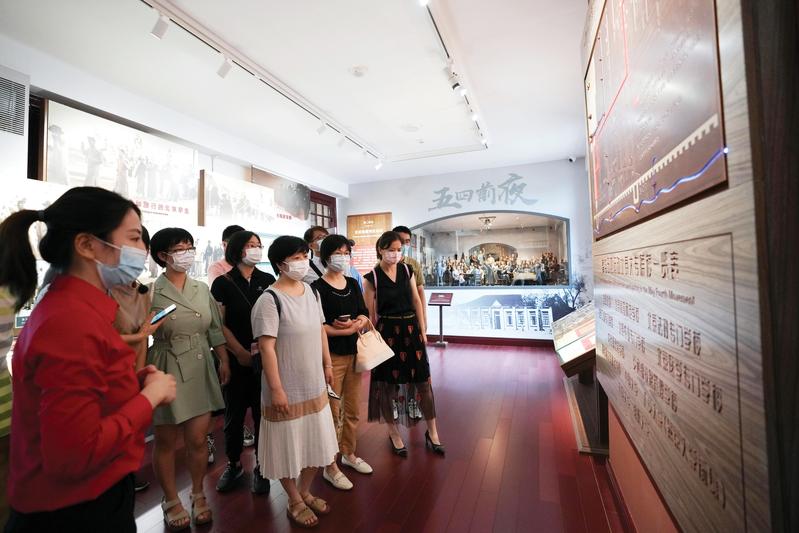 An exhibition in the Red Building in Beijing, the setting for early Communist revolutionary activities, features the history of the May Fourth Movement in 1919. (JU HUANZONG / XINHUA)

The members are 14 to 28 years old. A branch of the League should have a minimum of three members, and the CYLC had 3.68 million organizations nationwide by the end of last year, according to the statistics.

Hao said, “Young people are the future and hope of a country and the vanguard of social reform,” adding that as a Marxist political party, the CPC attaches great importance to educating and guiding young people and using their abilities.

Cultivating a large number of people capable of shouldering the “mission of the times” was stressed in a landmark resolution on the Party’s key achievements and experience over the past 100 years.

The resolution stated that the cause of the Party and the nation requires the continuous efforts of Chinese communists over generations. The Party must ensure that this vitally important cause is advanced by future generations.

Wu Qing, head of the Institute of Communist Youth League Work Theory, said establishing the League was a major action by the CPC to mobilize young people to take part in the great transformation of Chinese society.

“This shows that the CPC fully recognizes the important position and role of young people in the development and progress of Chinese society,” Wu said.

He added that over the past 100 years, the CPC has led the League in promoting China’s youth movement, an example of the Party ensuring there are successors to carry forward the great cause of realizing national rejuvenation.

“The experience of the youth movement led by the Party shows that young people need to be better mobilized and organized,” Wu said.

Young people needed an organization to serve as their core leadership to better unite them and promote development of the youth movement, he said. “Without this, the youth movement was bound to be lax and weak.”

The League has the important task of organizing and mobilizing young people through its overall structure, Wu said. It has five levels of committees, ranging from central to township, as well as grassroots branches.

“Some outstanding students join the League while they are at middle and high schools,” he said, adding that its members are “advanced elements” among young people, who will encourage their peers to work hard for the Party and the nation.

Wu said the League does an important job in guiding young people’s thoughts and helping them build “lofty ideals and a firm faith in the path of socialism with Chinese characteristics, enhancing their trust, faith and confidence in the Party.” 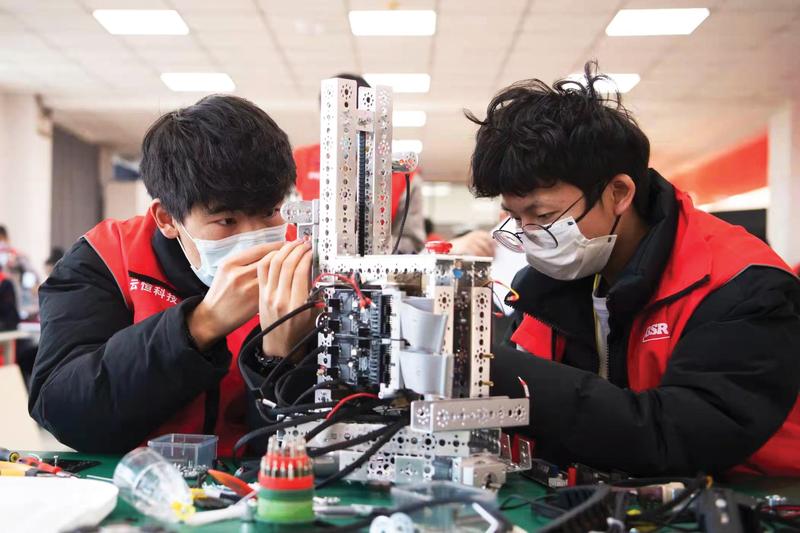 Wu added that as the younger generation uses the internet and new media a great deal, the League has opened accounts with popular social media platforms. It also produces online public courses, animations, and audio and video products for young people.

He said that by the end of 2020, the League had 120 million followers on new media platforms.

Huang Chenchen, a lecturer in youth work theory and practice studies at the Central School of Communist Youth League of China, said the CYLC Central Committee launched an online learning program in 2018 that featured videos on politics, Party history, and other topics of interest to young people.

“These videos are popular because they are narrated by young people from all over the country, who present topics in a way that is popular with their peers,” Huang said, adding that some celebrities have been invited to appear in the videos.

Another learning program, the Young Marxists Training Project, was launched by the League and several departments to train, for the Party, young political workers who have a firm belief in Marxism and can adapt it to the Chinese context.

“It’s a program to cultivate talent that firmly believes in the Party,” Huang said, adding that the systematic training usually lasts one year.

Guided by related policies, many university students who graduate from the program return to their hometowns, where they become grassroots civil servants, she said.

Inspired by the lofty ideals of communism, an increasing number of the young people have applied to join the Party and the League, according to a white paper on Chinese youth in the new era issued last month by the State Council Information Office of China.

A survey of more than 40 million members by the CYLC Central Committee at the end of last year found that 80 percent of respondents said they were more motivated to join the Party after learning about its history.

Nearly one-third of respondents said they applied to join the Party while they were learning about its history, the committee said.

Huang said another important mission for the League, as a bridge connecting the Party and young people, is encouraging, guiding and organizing the latter to devote themselves to building the nation.

When there is a major public crisis such as COVID-19 and natural disasters, the League, through its organizations nationwide, quickly gathers a large number of young people to form task groups to serve on the frontline, she said. 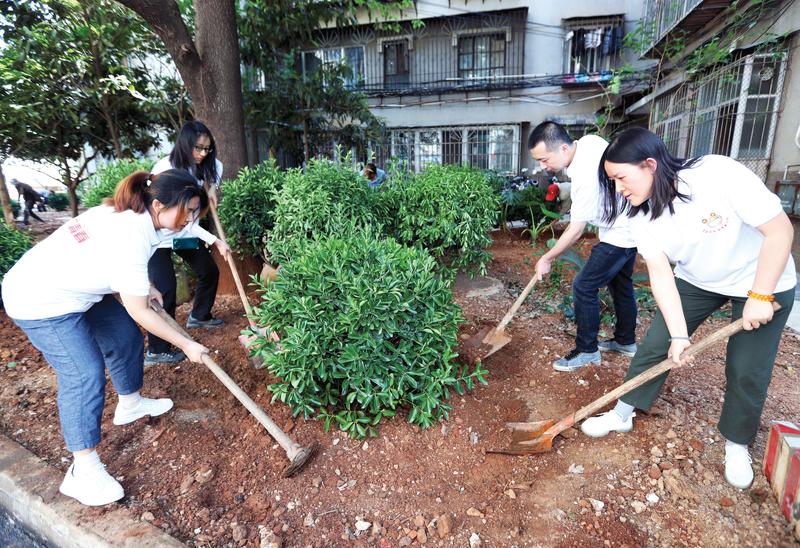 As Shanghai battles its worst outbreak of COVID-19 to date, the Shanghai Municipal Committee of the CYLC has urged young people to help contain infections and to “shine in the fight against the pandemic”.

The League’s organizations at all levels in Shanghai have organized more than 78,000 young people to form over 2,500 task groups to work on the frontline, providing medical care, transporting supplies, and constructing facilities, according to the city’s CYLC committee.

According to official data, more than 5.5 million young people in 320,000 task groups have worked on the frontline of epidemic prevention and control in China since COVID-19 emerged.

During construction of the Huoshenshan and Leishenshan makeshift hospitals in Wuhan, capital of Hubei, young workers accounting for 60 percent of the required workforce established 13 task groups, the data show.

The task groups’ red flags were hung at the construction sites.

“Such teams were established to emphasize that young people in good health and who are knowledgeable should act as the vanguard force when the country faces challenges,” Huang said.

She added that young Chinese also contribute their strengths in other ways. They work in grassroots areas where conditions are hard; they are a core force for the nation’s major scientific and technological tasks; and many of them are also international volunteers working in poor areas of the world.

“Young Chinese today have adhered to the tradition of arduous struggle, and countless numbers of them work hard in ordinary positions in factories, fields and at construction sites,” she said.

Although young people’s main tasks and roles have had a different focus over the years, they strive to achieve the same goal — the great rejuvenation of the Chinese nation.

Wu said that over the past 100 years, young people in China have shown great aspirations, deep feelings and great creativity for the country.

He said the goal of national rejuvenation will be achieved with generations of young people capable of shouldering this task contributing their efforts.