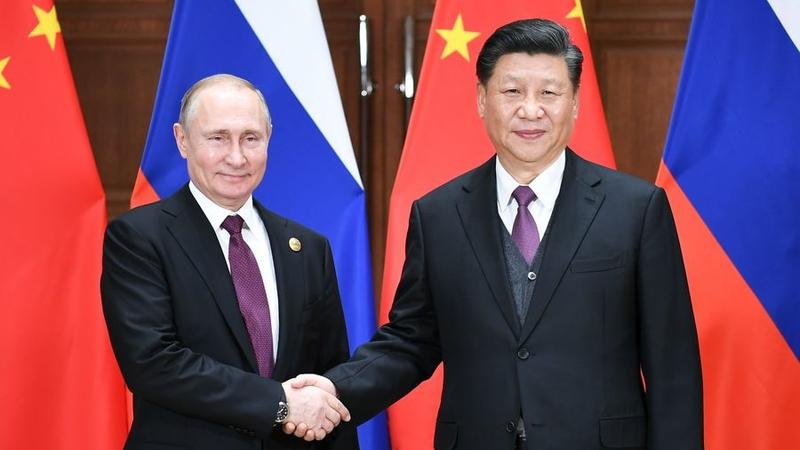 BEIJING - China is celebrating the Chinese New Year and under a global gaze for hosting the Winter Olympics. Adding to its festive mood is Russian President Vladimir Putin's scheduled visit and attendance at the opening ceremony of the grand sports event.

Nearly three years after Putin's last visit to China, the trip will witness the 38th meeting between Chinese President Xi Jinping and the Russian president since 2013.

Xi has said he very much looks forward to this "get-together for the Winter Olympics" and stands ready to work with Putin "for a shared future" to jointly open a new chapter in post-COVID China-Russia relations.

From Sochi To Beijing

During his talks with Putin, the Chinese president said he went to Russia to offer his congratulations in person as is customary for the Chinese people to do so on their neighbors' joyous occasions.

Eight years later, although the pandemic has disrupted exchanges among countries, the "get-together for the Winter Olympics" between the two leaders is going to take place in Beijing. It will not only be the first in-person meeting between the two countries' heads of state in about two years, but also a major event in international relations at the start of this year.

Before the visit, Putin has on multiple occasions voiced his confidence in China's successful hosting of the sports gala.

"There is every reason to believe that the Games in Beijing will be held at a very high level and will be part of the golden records of the world Olympic family," Putin said during a virtual meeting with Russian athletes.

From Sochi to Beijing, the two presidents' exchange of visits to the Winter Olympic Games will vividly demonstrate China and Russia's mutual support for each other's holding of major events or celebrations, as is also exemplified by Xi's presence at the Victory Day parade at Moscow's Red Square and Putin's attendance at the Belt and Road Forum for International Cooperation.

In 2017, Putin awarded Xi the highest honor of Russia, the Order of St. Andrew the Apostle the First-Called. A year later, Xi awarded Putin the first-ever Friendship Medal of the People's Republic of China.

This ever-growing friendship is not flourishing accidentally, but has been nurtured by the two leaders' common perspective on the importance of bilateral ties and on international issues.

"We share similar views on the international landscape and approaches to national governance," Xi said in the interview with Russian media. "Most importantly, we share a high degree of consensus on the strategic significance of the China-Russia relationship and therefore the same resolve and desire to deepen and sustain its growth."

The China-Russia relationship has grown into a big ship featuring the highest degree of mutual trust, the highest level of coordination and the highest strategic value. At the helm of the ship are the two heads of state.

And there are numerous touching moments in their interactions. In 2018, before an ice hockey friendly match between Chinese and Russian youth teams held in Tianjin, Xi and Putin posed for group photos with the teams and jointly dropped the puck to kick off the match. In 2019, the two leaders attended the inauguration ceremony of the panda house in Moscow Zoo, and cordially interacted with excited children.

During the COVID-19 pandemic, Xi and Putin have maintained close exchanges through phone talks, video conferences and other online activities, ensuring China-Russia relations advance with a sustained momentum toward higher levels.

The year of 2021 marked the 20th anniversary of the signing of the China-Russia Treaty of Good-Neighborliness and Friendly Cooperation. During their talks via video link in June, Xi and Putin jointly announced the extension of the treaty, leading bilateral relations to robust development in the spirit of everlasting friendship and win-win cooperation.

During the COVID-19 pandemic, Xi and Putin have maintained close exchanges through phone talks, video conferences and other online activities, ensuring China-Russia relations advance with a sustained momentum toward higher levels

Spearheaded by the two presidents, China-Russia cooperation, with an increasing quality and an expanding volume, has yielded outstanding fruits across traditional sectors and emerging industries. According to official figures, the trade between China and Russia reached a record high of more than $146 billion in 2021, up nearly 36 percent year-on-year.

For A Shared Future

"We support the traditional Olympic values, primarily, equal rights and justice," Putin said during the virtual meeting with Russian athletes.

The main goal of international sporting events is to strengthen friendships, Putin said, adding that Russia and China "oppose the politicization of sports."

For a world that is undergoing turbulent changes and multiple crises, such solidarity shown between the world's two major countries is especially valuable.

As Xi pointed out in a speech at the Moscow State Institute of International Relations in 2013, a high-level and strong China-Russia relationship is not only in the interests of both countries, but also serves as an important guarantee of international strategic balance and world peace and stability.

Also in the speech, Xi called for building a new type of international relations with win-win cooperation at the core and, for the first time on an international occasion, laid out his signature global vision: building a community with a shared future for mankind.

Facing the vicissitude of the international situation, China and Russia have always kept in mind their responsibilities as major countries, and staunchly opposed unilateralism, hegemonism and power politics.

China and Russia have been firmly safeguarding the international system with the United Nations at its core and the international order based on international law, jointly promoting the constructive role of the Shanghai Cooperation Organization and BRICS countries, and seeking greater synergy between the Belt and Road and the Eurasian Economic Union.

They have been cooperating in the fight against the pandemic and at the forefront in the development, production and supply of vaccines, leading the international community to unite in combating the virus.

Taking a clear-cut stand against certain countries' attempts to incite ideological conflict and confrontations over social systems, China and Russia have been advocating harmonious coexistence among different ethnic groups, systems and civilizations.

As the opening of the Beijing Winter Olympic Games is around the corner, anticipation of the "get-together" between Xi and Putin is running high. The meeting promises to be a boost to this brilliant model of relationship between  major countries, and is expected to inject a much-needed dose of stability and certainty into the world.