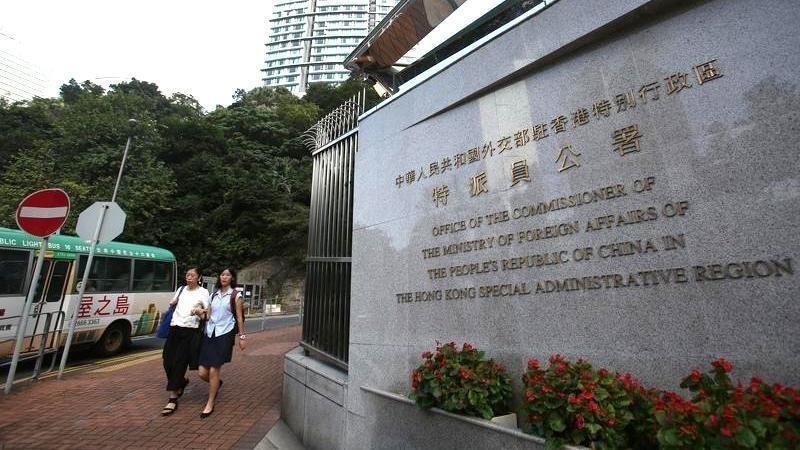 This Nov 17, 2016 photo shows the Office of the Commissioner of the Ministry of Foreign Affairs of the People's Republic of China in the Hong Kong Special Administrative Region in Central. (PARKER ZHENG / CHINA DAILY)

HONG KONG - The Office of the Commissioner of the Chinese Foreign Ministry in the Hong Kong Special Administrative Region on Thursday strongly disapproved of and firmly rejected the so-called Human Rights and Democracy Reports updated by the British Foreign, Commonwealth & Development Office.

The reports contained irresponsible comments about the human rights situation in 31 countries including China, pointed fingers at Hong Kong affairs and interfered in China's internal affairs, said a spokesperson of the office.

The spokesperson said that, after the implementation of the National Security Law in Hong Kong and the improvement of its electoral system, Hong Kong society has restored its public order and stability, and Hong Kong residents have enjoyed peace and freedom again

The spokesperson said that, after the implementation of the National Security Law in Hong Kong and the improvement of its electoral system, Hong Kong society has restored its public order and stability, and residents have enjoyed peace and freedom again.

The British side ignored the peaceful situation in Hong Kong and people's pursuit of stability, smeared the law-based governance of the HKSAR government, and used the Sino-British Joint Declaration as a pretext to criticize human rights and democracy in Hong Kong, the spokesperson noted.

"We have made it clear to the British side many times that the provisions relating to the British side in the Sino-British Joint Declaration were all fulfilled at the time of the return of Hong Kong and the completion of all follow-up work," the spokesperson said.

The spokesperson pointed out that Britain has no sovereignty, jurisdiction or "right of supervision" over Hong Kong even as it repeatedly made irrepressible remarks about Hong Kong affairs by citing the Sino-British Joint Declaration, which is purely a distortion of history and legal principles.

The spokesperson said that Britain itself has a bad human rights record and should reflect on itself.

"How could Britain lecture others and judge the affairs of other countries? How could it urge others to fulfill what the British self-proclaimed international obligations?" the spokesperson asked.

The spokesperson said the moves of Britain in vilifying Hong Kong, damaging the rule of law and talking down Hong Kong's development under the cover of human rights and democracy will gain no support.

"We urge the British side to immediately stop interfering in Hong Kong affairs and China's internal affairs, reflect on itself, check its own human rights record, stop confusing black and white, and refrain from deceiving the world with botched tricks," the spokesperson said.