Digital avatars are enjoying an explosion in popularity, especially among the younger generation, Deng Zhangyu reports. 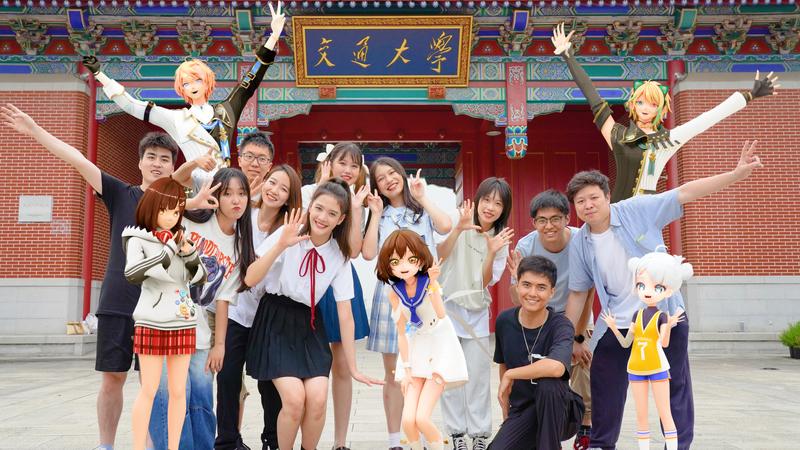 College students take a photo with members of digital dance team VirtualReal after they finish a performance in Shanghai in August.(PHOTO PROVIDED TO CHINA DAILY)

"Are you a human?" As questions go, this is one of the more bizarre. But, nonetheless, it is asked, in all seriousness, by a boy. He is addressing his query to, well, what appears to be a woman putting on makeup in front of a dressing table in a video posted on video-sharing platform Douyin, known as TikTok overseas. The "woman" named Liu Yexi then invites the boy to reach out for her "hand", ushering him into a fantasy world mixing reality with the virtual.

Posting the two-minute video on Oct 31, the avatar, wearing exquisite makeup, attracted more than 1 million fans and 2 million likes in a single day.

Followers of virtual idols are mostly young people growing up with the culture of anime, comics and games. People under the age of 24 account for the majority of that group

Liu is definitely not human. She is a virtual idol, whose creator describes her as a "virtual beauty vlogger" on her Douyin account, which has about 5 million followers as of mid-November, only two weeks after her debut on the short video platform.

Liang Zikang, Liu's creator, says that the idea to produce a virtual idol is related to the "metaverse", a concept that has gained traction recently, where the physical world combines with the virtual.

Liu has peers in cyberspace. With the growth of the metaverse concept, virtual idols are on the verge of a popularity boom, and China's Generation Z－people born in the late 1990s and early 2000s－are ready to drive it.

According to data from market consultancy iiMedia Research, the virtual idol industry in China reached 3.46 billion yuan ($540 million) in 2020, up 70 percent year-on-year and is estimated to double that in 2021.

"Followers of virtual idols are mostly young people growing up with the culture of anime, comics and games," says Lu Bin, head of a virtual idol studio operating as part of Chinese streaming platform iQiyi. "People under the age of 24 account for the majority of that group."

The studio was set up in February and has signed more than a dozen digital creations in different areas, including virtual bands Rich Boom and D.M, virtual influencer Qiudi and virtual host Xiaoyou. 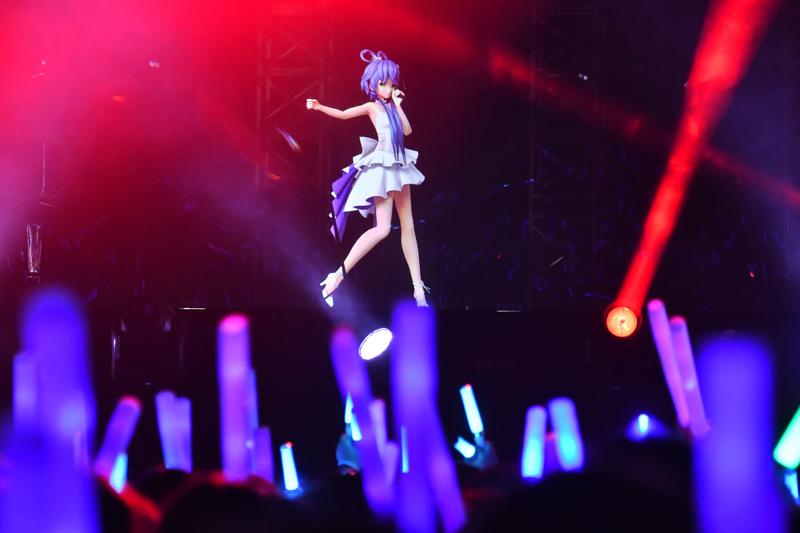 Virtual singer Luo Tianyi sings at her "birthday party" for her fans in July. (PHOTO PROVIDED TO CHINA DAILY)

Many of them were contestants of a virtual idol show, Dimension Nova, a "next-generation TV talent show for virtual contestants only", held by iQiyi in November 2020 to introduce the culture to a wider audience. The show generated hot hashtags that have been viewed more than 1.2 billion times in two months on micro-blogging platform Sina Weibo.

Before joining the virtual idol studio, Lu worked as an agent for real-life celebrities. Her current job, she says, is a new concept for those from traditional entertainment sectors.

"We have to set up unique personality and write stories for each of these avatars to cater to their targeted audiences," Lu says.

D.M is a virtual band comprising twin "siblings" Damian and Millie. Damian has been created to be a warmhearted, handsome rapper who loves his sister very much, while Millie is cool and a talented street dancer. 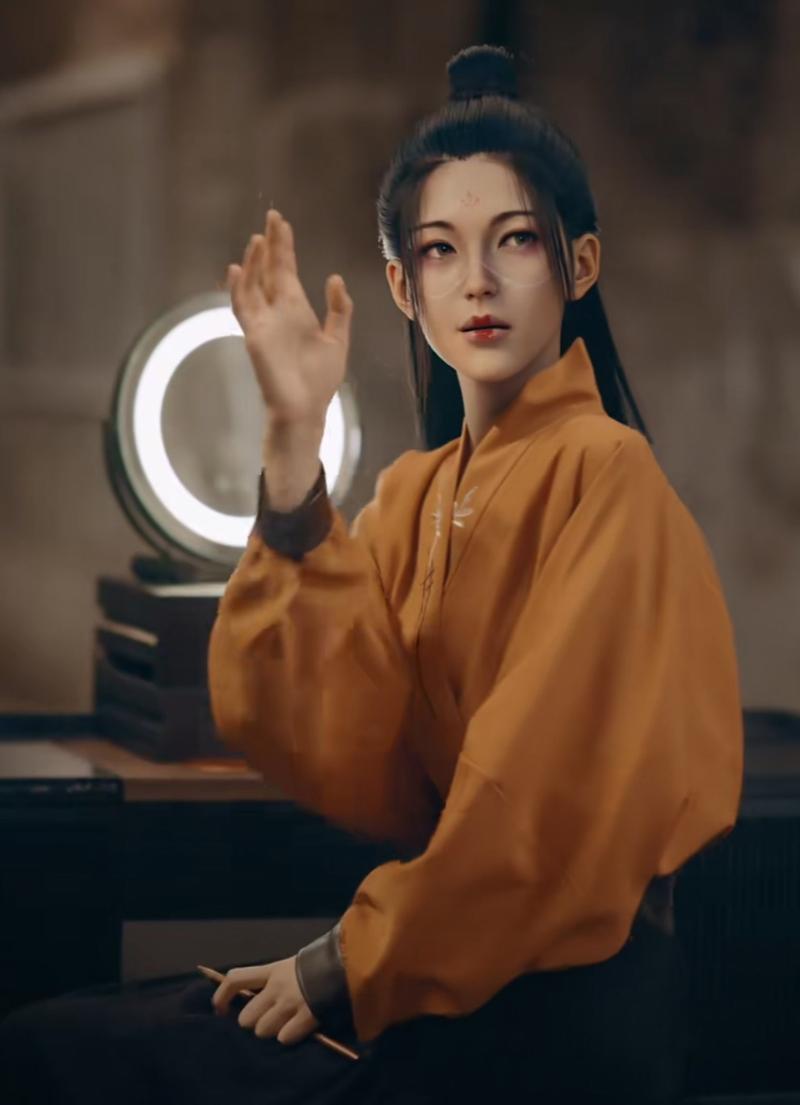 The duo, rendered using motion capture technology and computer graphics, performed at an arts festival held in June in Qinhuangdao, Hebei province, which attracted more than 300 artists from various sectors.

Damian and Millie performed four pieces every night during the festival. Their images were projected onto a big screen and they interacted with the audience, inviting them to dance together and actually teaching them some moves.

"It's not simply animation. The key difference between animated characters and virtual idols is the interaction with people," says Lu, adding that the band has received lots of invitations.

Damian and Millie have accounts on different social media platforms, such as Sina Weibo, lifestyle platform Xiaohongshu and Douyin. The accounts frequently post photos of the pair, express how they are "feeling" and interact with followers－just like real-life stars. Many people ask the same question under their posts: "Are you real humans?" 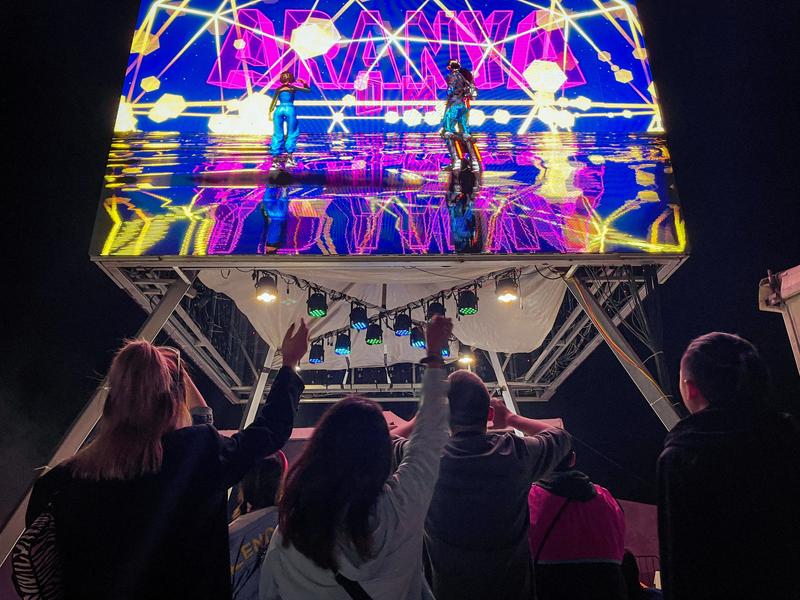 Virtual band D.M performs for an audience at an arts festival which attracts about 300 artists in Qinhuangdao, Hebei province, in June. (PHOTO PROVIDED TO CHINA DAILY)

Unlike Liu Yexi and D.M that bear a close resemblance to actual humans, the majority of virtual idols are drawn and styled like Japanese anime figures.

Virtual girl group A-Soul, produced last year by Yuehua Entertainment and ByteDance, owner of TikTok, has five members, each with a different style in keeping with popular anime aesthetics. Each of the characters have millions of followers on their respective social media platforms. A video showing them singing and dancing can attract millions of viewers on Bilibili, a short video sharing platform especially popular with Generation Z.

Bilibili is one of the earliest platforms to invest in the virtual idol industry and, in 2019, it set up a section for virtual influencers.

The company says that there are 32,412 accounts which were created "by" virtual influencers on the platform to broadcast music, dance and game videos last year. Comments from users sent during livestreams involving these influencers reached 560 million in 2020, up 100 percent compared to 2019.

Since 2017, Bilibili has organized an annual concert of virtual idols and attracted many fans who love comics and anime. The peak number of people watching the live 2020 virtual idol concert online in December last year hit 10.8 million. 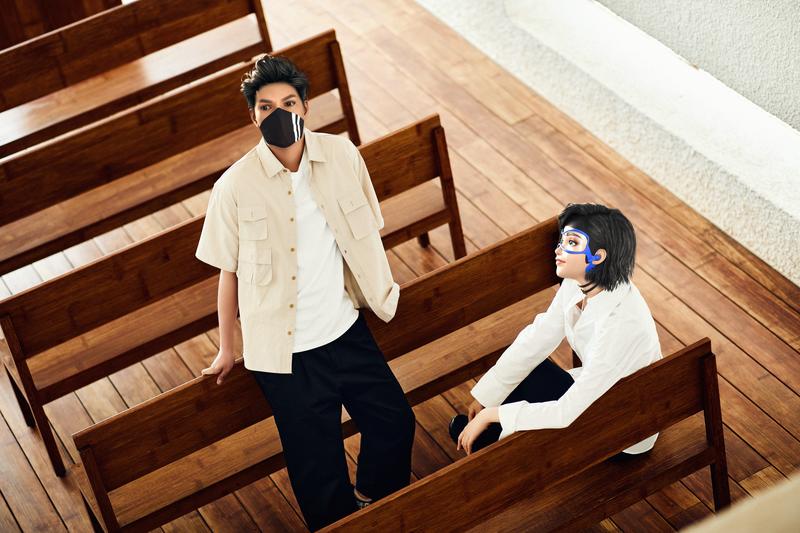 Original music by Luo Tianyi, a leading Chinese virtual singer created nine years ago, is often posted on Bilibili and the character is one of the platform's top virtual celebrities.

Luo's fans write songs, compose music, and draw illustrations for her, which have helped the avatar's personality develop－a personality which is basically controlled by its creator.

Luo performed with real celebrities at the 2021 Spring Festival Gala produced by China Central Television, becoming the first virtual idol to perform at the event and be seen by a nationwide audience.

Wu Ying, a college student in Beijing and a fan of Luo, says that these avatars meet all her expectations for idols.

"They have perfect appearances, voices and personalities. When I interact with them via livestreams, I feel that they're interesting and cute, like real humans," says Wu, adding that she is a die-hard fan of comics and animations. 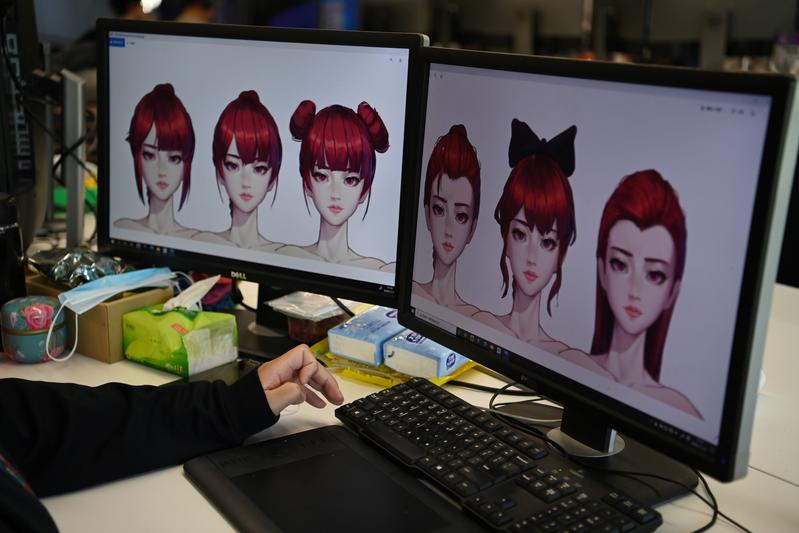 An animator works on hairstyles for a virtual idol in Beijing. (GREG BAKER / AFP)

Bilibili says that a greater number of young people have been tuning into livestreams hosted by virtual influencers. As the number of young audience members increases, the revenue generated by these virtual hosts rise just as rapidly.

Although the virtual idol industry seems to be burgeoning, some reservations remain.

Lu Jing, a key observer of the industry based in Shanghai, says that investment in a single high-tech virtual idol is vast and the content production can be expensive.

"To change the outfit of an AI-based virtual idol can cost hundreds of thousands of yuan," explains Lu Jing.

The real challenge which comes with more companies exploring the sector, however, will be maintaining the popularity of the characters and their sense of uniqueness.