Well-orchestrated festival for students to enjoy 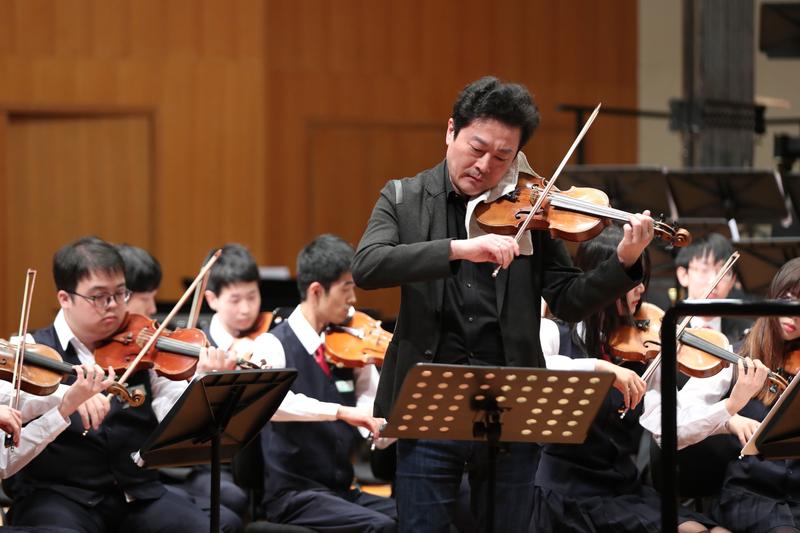 Violinist Lyu Siqing rehearses with a student symphony orchestra at the middle school affiliated to the Central Conservatory of Music in Beijing on Thursday. (WANG JING / CHINA DAILY)

"You remind me of my days as a music student here, which are unforgettable. I hope that when you grow up and become a professional musician, you will still remember this, playing music with your friends on a sunny day," violinist Lyu Siqing told members of a student symphony orchestra after a rehearsal at the middle school affiliated to the Central Conservatory of Music in Beijing on Thursday.

The students, sitting on the stage while holding their musical instruments, tapped their feet on the floor in warm response to Lyu.

It’s a totally different experience talking to each other and solving problems. It is both personal and mutual

The students, all teenagers who are classically trained to become musicians, spent a week together at the school doing rehearsals and attending master classes as part of the Youth Music Festival of Beijing, Hong Kong and Macao.

In its first year, the event, which kicked off on Sept 30 and wrapped up with a concert on Friday at the National Center for the Performing Arts in Beijing, is designed to provide an opportunity for students pursuing music majors to meet their counterparts from Beijing, Hong Kong and Macao and to encourage the exchange of ideas, music and culture.

The event was originally scheduled to take place in August, but was postponed due to the COVID-19 pandemic. Students of Hong Kong and Macao were unable to travel to Beijing as a result, so the exchange programs moved online.

During the event, Lyu not only oversaw rehearsals with the students, but also gave master classes, sharing his experience as a violinist.

"When I was a music student, I didn't have much chance to take part in exchange programs like this. As a violinist, I spent lots of time practicing alone. However, it's important－and fun－to play music with others," says Lyu, who, in 1987, became the first Asian violinist to win first prize at the prestigious International Violin Competition Premio Paganini in Italy, an achievement that propelled him to stardom.

Lyu began learning the violin when he was 4 years old. By the age of 8, he was enrolled to study at the primary school affiliated to the Central Conservatory of Music and, later, the affiliated middle school. At the age of 19, he went to the Juilliard School in New York to study with American violinist Dorothy DeLay.

"As well as learning techniques, students also asked me lots of questions, which I also had myself when I was a young student. For example, they wanted to know how to figure out their personal performing styles, how to prepare themselves for major competitions and how to build up a long career as a musician. Though they can get all kinds of information they want from the internet, it's a totally different experience talking to each other and solving problems. It is both personal and mutual," says Lyu, who performed two musical works with the student symphony orchestra－the well-known Chinese violin concerto Butterfly Lovers and Concerto for Two Violins in D Minor by Johann Sebastian Bach－during the concert on Friday. 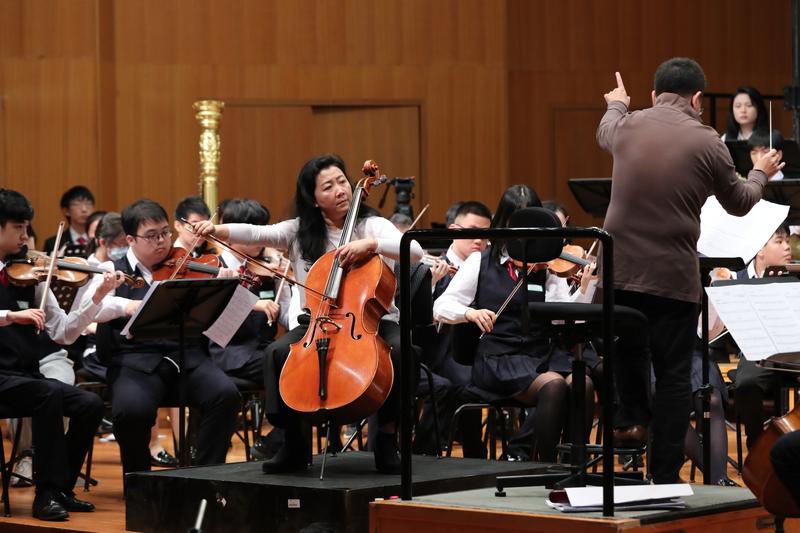 "Butterfly Lovers is very beautiful and I've gained a different feeling for it after training with Lyu. He told us that the only way for the composer who died a long time ago to communicate with musicians today is through musical scores. Thus, it's important to read and study both the scores and the composers' notes very carefully," says 17-year-old Zhao Junjie, a violin student at the middle school affiliated to the Central Conservatory of Music.

"We spent about six hours a day rehearsing, which was very helpful. Being part of an orchestra means that I need to listen to others while playing my musical instrument. It's quite different from playing by myself. Though we may have some different opinions about music, it's still a rewarding experience," says 18-year-old Hu Yifei, who also studies the violin at the middle school.

According to cellist Namura, who is also the school's president and an organizer of the festival, 90 students were selected to join this year's event and celebrated musicians, including pianist Lang Lang, cellist Wang Jian and violinist Lyu, participated as teachers and performers.

The event is co-organized by Beijing Music Festival, one of the largest annual classical music events in the country, which kicked off on Saturday and will run through Oct 24.

"Hundreds of students from Beijing, Hong Kong and Macao applied for the event. Though we had to make changes to the original plan due to the pandemic, we've seen the warm feedback of the students. When the pandemic eventually passes, we will definitely bring the students together," says Namura. "I hope that they can benefit from this event by sharing music and making new friends."

Kiora Zhou, a 23-year-old cellist, who is studying at the University of Music and Performing Arts Graz in Austria, had planned to visit Beijing to take part in the event.

"It was very disappointing that I couldn't travel to Beijing due to the pandemic, but I still had a wonderful time talking to those great musicians and music major students over the internet," says Zhou, who was born and raised in Macao.

She was also originally scheduled to play the fourth movement of a symphonic suite, titled Dream Bridge, composed by Fang Dongqing, during the concert on Friday alongside Namura. The music piece celebrates the Hong Kong-Zhuhai-Macao Bridge, the world's longest cross-sea bridge, which opened to the public in October 2018.

"It's a very meaningful piece of music. Like the bridge, music also connects people," says Zhou.