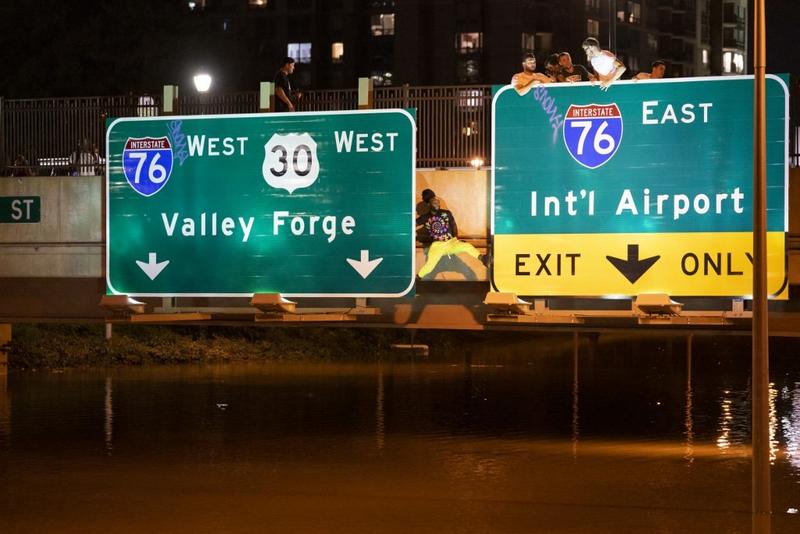 A man climbs between highway signs on a portion of Interstate 676 after flooding from heavy rains from hurricane Ida in Philadelphia, Pennsylvania on Sep 2, 2021 . (PHOTO/ AFP)

HOUSTON - Heavy rains fell across the Gulf Coast of Texas and Louisiana on Tuesday as tropical storm Nicholas strengthened into a hurricane before making landfall, bringing the threat of widespread flooding, power outages and storm surges.

Nicholas was some 30 km northeast of Matagorda, Texas as of 1 am Central Time (2 am Eastern), heading northeast with maximum sustained winds of 120 kph, the National Hurricane Center said in a bulletin early on Tuesday. It made landfall along the Texas coast, NHC said.

US President Joe Biden declared an emergency for Louisiana and ordered federal assistance to supplement local response efforts due to conditions resulting from Nicholas, the White House said.

US President Joe Biden declared an emergency for Louisiana and ordered federal assistance to supplement local response efforts due to conditions resulting from Nicholas, the White House said

The latest hurricane could also knock out electricity and hamper restoration efforts after hurricane Ida knocked out power earlier in Louisiana.

More than 90,000 people in Louisiana and more than 230,000 people in Texas faced outages as of early Tuesday, according to the website PowerOutage.us.

"It will be a very slow-moving storm across the state of Texas that will linger for several days and drop a tremendous amount of rain," Texas Governor Greg Abbott said on Monday. 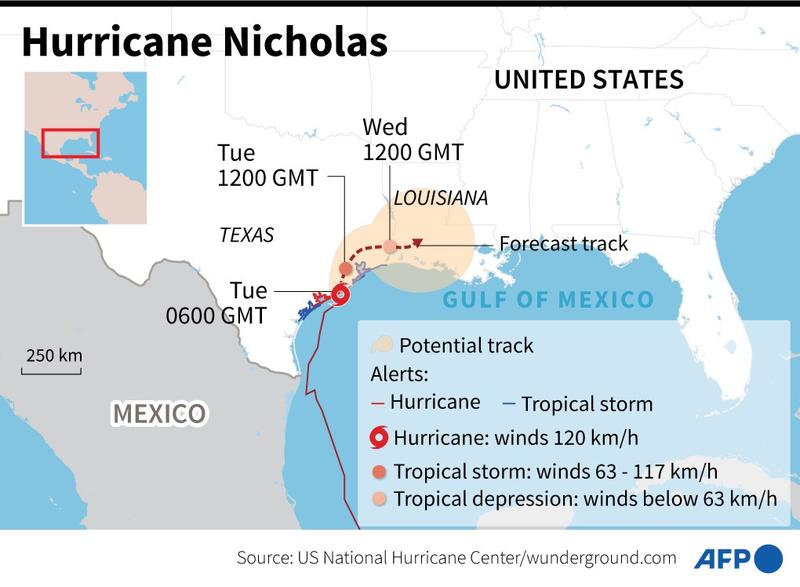 Location and predicted path of Hurricane Nicholas in the Gulf of Mexico. (GRAPHIC/AFP)

Abbott declared states of emergency in 17 counties and three cities. He said boat and helicopter rescue teams had been deployed or placed on standby.

Nicholas is the second hurricane in recent weeks to threaten the US Gulf Coast. Hurricane Ida wreaked havoc in August, killing more than two dozen people and devastating communities in Louisiana near New Orleans.

"Take things seriously and prepare," Turner said at a news conference. "This is primarily a rain event and we don't know how much rain we will be getting."

The Houston Independent School District canceled classes for Tuesday, while dozens of schools across Texas and Louisiana shut down on Monday. Houston suspended light rail and bus services on Monday evening. Hundreds of flights were canceled or delayed at airports in Corpus Christi and Houston.

Houston, the fourth-most populous US city, was devastated in 2017 when Harvey, a Category 4 hurricane, slammed Texas, dropping up to 102 cm of rain in some sections and killing more than 100 people.

ALSO READ: In Ida's wake, Louisiana faces a month with no power

National Weather Service models forecast rainfall totals from Nicholas up to 41 cm for coastal parts of Texas, reaching 51 cm in some isolated areas. As the hurricane moves northeast, it was expected to pummel parts of south central Louisiana and southern Mississippi with up to 25 cm of rain.

The National Weather Service issued storm surge, flood and tropical storm warnings and watches throughout the region, calling it a "life-threatening situation."

"We want to make sure that no one is caught off guard by this storm," Louisiana Governor John Bel Edwards said at a news briefing on Monday.

Edwards warned that drainage systems still clogged with debris from Ida and other storms might be deluged by the heavy rain, triggering flash floods.

Royal Dutch Shell on Monday began evacuating staff from a US Gulf of Mexico oil platform and other firms began preparing for hurricane-force winds.