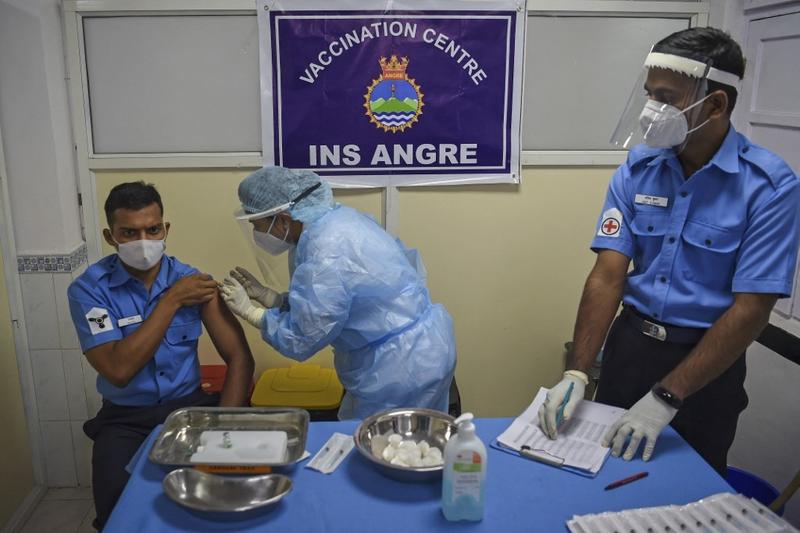 An Indian Navy personnel gets inoculated with a COVID-19 vaccine at the INS Angre naval base in Mumbai on March 5, 2021. (PUNIT PARANJPE / AFP)

CANBERRA / KABUL / DHAKA / ULAN BATOR / KUALA LUMPUR - India administered 1.4 million vaccine doses in the past 24 hours, health ministry data showed on Friday, the highest in a day since the campaign began in mid-January as the government moves to address initial hiccups.

The country of 1.35 billion people still has to nearly double its current rate of vaccination to meet its target of covering 300 million people by August. The two vaccines in use in India need to be administered in two doses, four to six weeks apart.

India has so far given 18 million doses to about 15 million people.

According to the official data, the death toll mounted to 157,548 as 113 COVID-19 patients died since Thursday morning.

Some 1,430 tests were conducted in the past 24 hours with 13 infections being detected in eight out of Afghanistan's 34 provinces, the ministry said in a statement.

Australia has asked the European Commission to review a decision by Italy to block a shipment of AstraZeneca’s COVID-19 vaccine, while stressing on Friday the missing doses would not affect the rollout of Australia’s inoculation programme.

Italy, supported by the European Commission, barred the planned export of around 250,000 doses of AstraZeneca’s vaccine after the drug manufacturer failed to meet its European Union contract commitments.

Hunt said Australia had already received 300,000 doses of AstraZeneca’s COVID-19 vaccine, which would last until local production of the vaccine ramps up.

Australia began its inoculation programme two weeks ago, vaccinating frontline health staff and senior citizens with Pfizer’s COVID-19 vaccine though doses of that vaccine are limited amid tight global supplies.

Bangladesh reported 635 new COVID-19 cases and six more deaths on Friday, making the tally at 549,184 and the death toll at 8,441, the Directorate General of Health Services (DGHS) said.

The official data showed that 13,710 samples were tested in the last 24 hours across Bangladesh.

Iran will import a million doses of the AstraZeneca vaccine through the World Health Organization’s COVAX scheme between March 18-28, according to the head of the country’s coronavirus task force. The Health Ministry on Friday reported 8,367 new virus cases and 81 deaths overnight.

Iran has so far imported Sputnik V and Sinopharm jabs, and clinical trials are underway for its own domestically produced vaccines.

Japanese Prime Minister Yoshihide Suga extended by two weeks a virus state of emergency for the Tokyo region that had been set to expire Sunday, trying to maintain a declining trend in infections as the country looks to host the Olympics in about four months.

The move to prolong a nearly two-month emergency already in place for the region was needed to prevent a fresh wave of infections from emerging, Suga said in a briefing Friday. The measure applies to Tokyo and the prefectures of Kanagawa, Chiba and Saitama, which have a combined population of about 36 million people.

Under the emergency, local governments have instructed bars and restaurants to close at 8 pm, and advised people to avoid going out unnecessarily. The measures, while limited, have helped much of the country bring infections under control, but have proved damaging for many retail and restaurant businesses.

The findings in part contradict recent recommendations from the US Centers of Disease Control and Prevention (CDC) that two masks were better than one at reducing a person’s exposure to the coronavirus.

Researchers used the Fugaku supercomputer to model the flow of virus particles from people wearing different types and combinations of masks, according to a study released on Thursday by research giant Riken and Kobe University.

Using a single surgical-type mask, made of non-woven material, had 85% effectiveness in blocking particles when worn tightly around the nose and face. Adding a polyurethane mask on top boosted the effectiveness to just 89 percent.

Turkey on Thursday reported 11,322 new COVID-19 cases, including 685 symptomatic patients, as the total number of positive cases in the country reached 2,746,158.

The rate of pneumonia in COVID-19 patients stands at 3.6 percent and the number of seriously ill patients is 1,220 in the country, said the ministry.

Kuwait's government decided on Thursday to impose a partial curfew as part of its efforts to curb the COVID-19 spread, the government spokesman Tareq Al-Mezrem said.

At a press conference held Thursday evening, Al-Mezrem said that the partial curfew will start on Sunday from 5 p.m. local time (1400 GMT) to 5 a.m., until April 8.

All commercial activities will be suspended during the curfew time, he said, adding that the government decided to prevent non-Kuwaitis from entering the country until further notice.

In addition, the government also decided to close parks and allow restaurants and cafes to serve through delivery only.

Kuwait has imposed a partial curfew as daily cases jumped to the highest on record. The curfew comes into force from March 7 between 5 a.m. and 5 p.m. for a month, the Council of Ministers said in a statement. The Gulf nation reported 1,716 new cases on Thursday, taking the total to 196,497 with 1,105 deaths.

Israel's Ministry of Health reported 3,817 new COVID-19 cases on Thursday, raising the total tally in the country to 792,686.

The death toll from the COVID-19 in Israel reached 5,821 after 19 new fatalities were added, while the number of patients in serious condition decreased from 717 to 699, out of 1,137 hospitalized patients.

The number of people vaccinated against COVID-19 in Israel have surpassed 4.88 million, or 52.5 percent of its total population, since the vaccination campaign began on Dec. 20, 2020.

The Qatari Health Ministry on Thursday announced 475 new COVID-19 infections, raising the total number of confirmed cases in the Gulf state to 165,546.

Meanwhile, 318 more people recovered from the virus, bringing the overall recoveries in Qatar to 155,070, while the total fatalities remained at 260 for the second day running, the ministry said in a statement quoted by the official Qatar News Agency (QNA).

Meanwhile, the total number of coronavirus deaths in Lebanon went up by 53 to 4,919.

Firas Abiad, director of Rafic Hariri University Hospital, urged on Thursday Lebanese authorities to control borders in a bid to reduce the spread of the pandemic.

"During pandemics, border control is an essential element of national public health policy," he tweeted.

He also called upon the authorities to enforce quarantine for the people arriving in Lebanon since many of them do not respect voluntary self-isolation.

The new cases included 1,729 in the Iraqi capital Baghdad, 972 in Basra, 465 in Najaf, 275 in Qadisiyah, and 269 in Karbala, while the remaining cases were detected in other provinces, the ministry said in a statement.

A total of 7,008,505 tests have been carried out across the country since the outbreak of the disease, with 45,235 done during the day.

The Omani health authorities announced on Friday that the second doses of COVID-19 vaccines will start to be administered from Sunday, the official Oman News Agency reported.

The latest COVID-19 statistics showed that the total number of coronavirus cases in Oman has increased to 142,896, including 133,491 recoveries and 1,583 deaths.

A trial on the COVID-19 vaccine produced by China’s Anhui Zhifei Longkema Biological Pharmaceutical will enroll as many as 4,000 participants in Bandung and Jakarta, CNN Indonesia reports.

Approval for an emergency use of the vaccine is expected in September, CNN reports.

Health Ministry Director-General Noor Hisham Abdullah said in a press statement that five of the new cases are imported and 2,149 are local transmissions.

The number of COVID-19 cases in Myanmar has increased to 142,000 as of Thursday, according to a release from the Ministry of Health and Sports.

A total of 16 newly confirmed COVID-19 cases were reported in the country on Thursday.

One more COVID-19 death was reported on Thursday, bringing the death toll to 3,200, the release said.

According to the ministry's figures, a total of 131,571 patients have been discharged from hospitals and over 2.49 million samples have been tested for COVID-19 so far.

A total of 1,618 samples were tested for COVID-19 on Thursday, down from around 10,000 samples tested daily in the first week of last month.

Mongolia registered 77 new COVID-19 cases in the last 24 hours, the highest daily increase since the pandemic hit the country, bringing its national tally to 3,153, the country's National Center for Communicable Diseases said Friday.

The latest cases were locally transmitted, and detected in the country's capital Ulan Bator, the center said in a statement.

Among the cases, 76 were found in people who had close contact with previously confirmed cases, while the source of the remaining one has not yet been identified, according to the center.

South Korea’s Ministry of Food and Drug Safety approved the use of Pfizer’s coronavirus vaccine under the condition that it submits results of final clinical trials, according to a statement.

South Korea reported 398 more cases of COVID-19 as of midnight Thursday compared to 24 hours ago, raising the total number of infections to 91,638.

The daily caseload fell below 400 in three days, but it stayed in the 300s and 400s since mid-February.

Of the new cases, 129 were Seoul residents and 168 were people residing in Gyeonggi province. 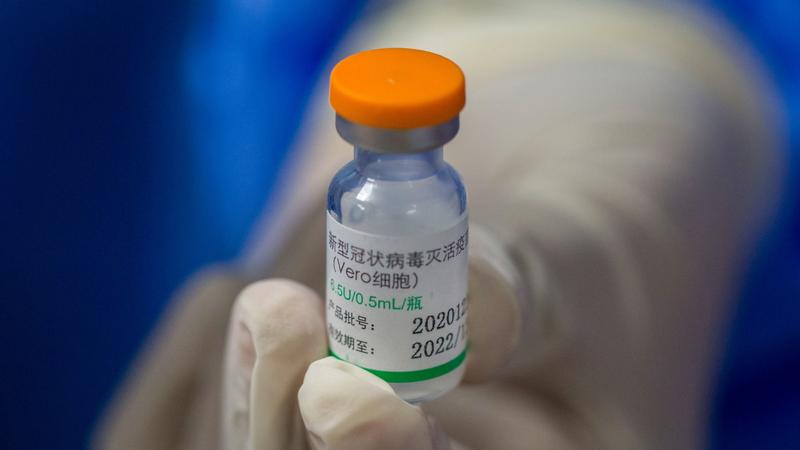 A health worker handles a vial of the Sinopharm Group Co. COVID-19 vaccine in the Adult Vaccination Center at the Dow University Hospital in Karachi, Pakistan, on Feb 3, 2021. (PHOTO / AFP)

Pakistan on Friday approved the emergency use of Sinopharm COVID-19 vaccine for people over 60 years of age, a statement by the National Command and Operation Center (NCOC) said.

The Drug Regulatory Authority of Pakistan allowed all registered healthcare workers with the national institute of medical sciences who are above 60 years old to get themselves vaccinated from designated vaccine centers, an NCOC statement read.

It is phase two of the vaccination process in Pakistan. In phase one, the country inoculated the Sinopharm vaccine to its frontline medical staff. The vaccine doses were donated by China earlier last month to help the country fight against the COVID-19 pandemic.

The Philippines' Department of Health (DOH) reported on Friday 3,045 new confirmed cases of COVID-19, the highest daily tally in more than four months, bringing the total number of confirmed coronavirus infections in the Southeast Asian country to 587,704.

The death toll climbed to 12,423 after 19 more patients died from the viral disease, the DOH said. It added that 178 more patients recovered, raising the total number of recoveries to 535,207.

The Philippines, which has about 110 million population, has tested over 8 million people since recording the first case in January last year.

The new cases, a 28-year-old man and a 26-year-old man, both from northern Laos' Luang Prabang province, are Lao workers returning from Thailand and were quarantined in Vientiane upon arrival, according to a report from the ministry on Friday.

Auckland moved up to COVID-19 Alert Level 3 from Level 2 on Feb. 28, with the rest of the country moved into Alert Level 2 from Level 1, after two community cases were found. One of the cases visited several locations while being infectious, Ardern told a press conference.

Thailand on Friday confirmed 79 new cases of coronavirus infection, mostly domestic, according to a report of the Center for the COVID-19 Situation Administration (CCSA).

Of the 79 cases, 65 were reported as domestic while 14 others referred to those who had returned from abroad and tested positive for the coronavirus in the country, the CCSA report says.

Vietnam recorded six new cases of COVID-19 infection on Friday, bringing the total confirmed cases in the country to 2,494, according to its Ministry of Health.

The new infections, all imported, were detected in the southern provinces of Binh Duong, Tay Ninh and Kien Giang.