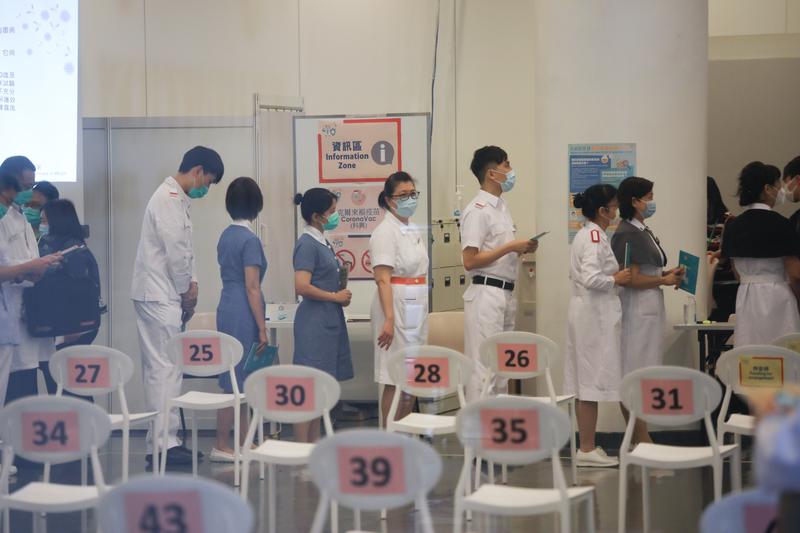 Residents fall in line to get inoculated against COVID-19 at the Community Vaccination Centre set up in the Hong Kong Central Library's Exhibition Gallery in Causeway Bay, Hong Kong on Feb 23, 2021. (CALVIN NG / CHINA DAILY)

HONG KONG - The Hong Kong government on Tuesday said it would allow up to four persons to gather in public starting Wednesday as the city reported 12 new COVID-19 cases.

In a statement, the Food and Health Bureau said the two-person limit on public gatherings would be relaxed as the pandemic in the city "continued to subside."

"Taking into account that the local epidemic wave has continued to subside, as well as the need for society as a whole to resume social and economic activities, we announced earlier to continue to relax social distancing measures in a gradual and orderly manner, which includes relaxing the number of persons allowed in group gatherings in public places from two to four starting from February 24," a  spokesman for the bureau was quoted as saying in the statement.

The new infections on Tuesday included 11 local cases, three of which were untraceable, while the imported case came from the Philippines, Chuang Shuk-kwan, head of the Centre for Health Protection’s communicable disease branch, said at a press briefing.

Three of the new infections were untraceable, while the imported case was from the Philippines, said  Chuang Shuk-kwan, head of the Centre for Health Protection’s communicable disease branch

More than 10 people tested preliminarily positive for the coronavirus as of Tuesday afternoon, she added. The city’s overall tally of confirmed cases rose to 10,896.

Chuang said the untraceable cases included that of a cook at Volcano Kitchen One in Tsuen Wan who tested positive, which led to 10 others being quarantined.

One more student at Caritas Lok Yi School, an institution in Shau Kei Wan for students with special needs, was confirmed infected, as well as two close contacts. So far, this infection cluster includes three students, three staff members and four family members of the patients, she added.

Chuang said a 22-year-old man who worked at the Flower Market in Mong Kok tested preliminarily positive. The patient, who lived in a building along Fuk Wah Street in Cheung Sha Wan, developed symptoms on Feb 11. He had gone to work on Feb 2 and 13.

Another preliminary case involved a part-time salesperson who developed symptoms on Feb 15 and went to work the next day at the Royal Plaza Cake Shop in Mong Kok, Chuang added.