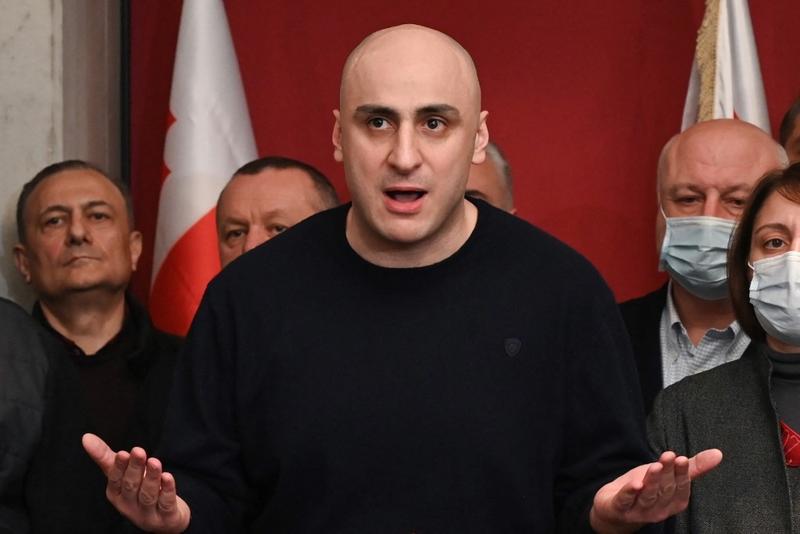 In this file photo taken on February 17, 2021 Nika Melia, one of the leaders of exiled former president Mikheil Saakashvili's United National Movement (UNM), holds a briefing at the UNM headquarters in Tbilisi. (VANO SHLAMOV / AFP)

Georgian police stormed the party offices of opposition leader Nika Melia and detained him early on Tuesday, days after the prime minister resigned after a disagreement over whether to take the prominent politician into custody.

Melia, chairman of the United National Movement (UNM) opposition party, had been accused of inciting violence at street protests in June 2019, a charge he has dismissed as politically motivated.

A court in the capital Tbilisi ordered last week that he be taken into custody for allegedly failing to post bail. The Interior Ministry at the time announced it was postponing carrying out the order to detain Melia following the resignation of Prime Minister Giorgi Gakharia.

Footage from inside UNM offices published by the Sputnik Georgia outlet showed Melia barricaded inside a room with some of his supporters, while opposition activists clashed with police on the street.

“We call on both the representatives of political parties and their supporters to protest in a peaceful manner, to refrain from violent actions and not interfere with the court’s decision,” Sputnik Georgia quoted the Interior Ministry as saying, referring to the order to have Melia detained.

Gakharia, who stepped down on Feb 18, said his decision had been prompted by a disagreement with his own team over the order to detain Melia.

Gakharia had said that Melia’s detention was unacceptable if it threatened to fuel political divisions in the South Caucasus country of 3.7 million people.