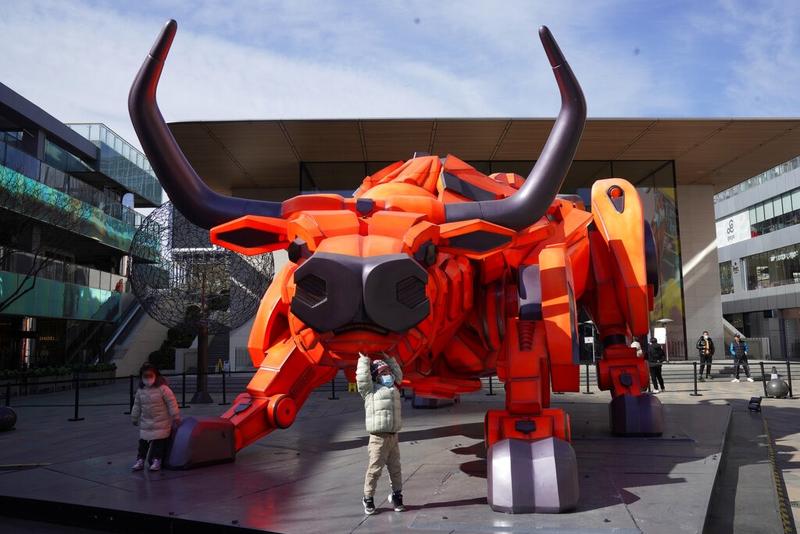 A child wearing a mask to protect from the coronavirus poses an Ox sculpture installed to mark the Chinese New Year of the Ox in Beijing on Feb 18, 2021. (NG HAN GUAN/ AP)

Leaders and dignitaries of foreign countries and associations extended greetings and congratulations, conveying their best wishes and positive expectations to the Chinese communities.

International Monetary Fund Managing Director Kristalina Georgieva sent her greetings to everyone from China and from many other Asian countries who celebrate the Lunar New Year. She said it is “a great time to celebrate the diverse cultures of our truly global fund family.”

With a video message and multilingual tweets, French President Emmanuel Macron extended his greetings online to all people celebrating the Spring Festival.

On the eve of the Lunar New Year, Macron extended his greeting in four tweets using French, Chinese, Korean and Vietnamese, saying “I extend my best wishes to all those celebrating the Lunar New Year, and wish everyone health, success and happiness!”

The next morning, Macron shared a video on Twitter to “all our compatriots who celebrate the Lunar New Year”, wishing that “the Year of the Ox (be) full of joy, hope and happiness”.

The couple called for unity and respect for diversity.

In the US, governors, educators, scholars, artists as well as business people all sent their wishes to the Chinese when attending an online celebration held by the Chinese Consulate General in New York.

Massachusetts Governor Charlie Baker said he is pleased to join the celebration, and wants to take a moment to wish those in the Chinese community throughout the Commonwealth a very happy Chinese Lunar New Year.

New Zealand Prime Minister Jacinda Ardern said Lunar New Year is a special time for many communities in Aotearoa (Maori name for New Zealand) and for millions of people around the world. “It’s a time to come together and celebrate new beginnings.”

During the celebrations held in the capital Suva, Fiji Prime Minister Voreqe Bainimarama wished the local Chinese a happy Lunar New Year, saying: “The Chinese New Year is a time to reflect on the events of the past year, and it is an opportunity to look forward to a better future.”

In a video clip posted online, Scotland’s First Minister Nicola Sturgeon said she wants to send her “very best wishes” to everyone in China and across the world, for the start of Chinese New Year.