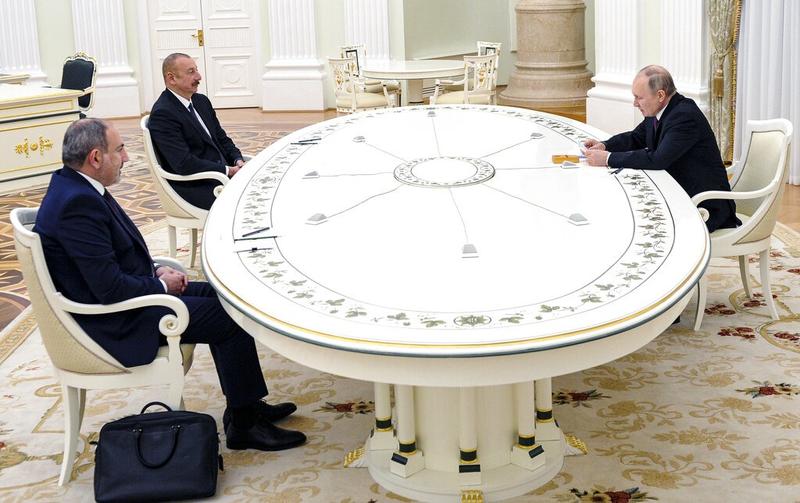 MOSCOW－The leaders of Russia, Armenia and Azerbaijan agreed on Monday to take joint measures to restore transportation in the Nagorno-Karabakh region recently freed from armed conflict.

According to a statement, Russia, Armenia and Azerbaijan will set up a trilateral working group co-chaired by their deputy prime ministers to ensure that all economic and transport connections in Nagorno-Karabakh will be unblocked

According to the statement, the three countries will set up a trilateral working group co-chaired by their deputy prime ministers to ensure that all economic and transport connections in Nagorno-Karabakh will be unblocked, part of a cease-fire deal reached by the three leaders on Nov 9.

"The implementation of those agreements will benefit both the Armenian and Azerbaijani people and the entire region," Putin said after four hours of talks in the Kremlin before sitting down for separate meetings with Aliyev and Pashinyan.

"It opens completely new perspectives that we couldn't even imagine in the past," he said.

Pashinyan contested that claim, arguing that the status of Nagorno-Karabakh is yet to be determined, but he also hailed the plans to restore transit routes.

The working group will hold its first meeting before Jan 30 to make a list of key areas of work, with railway and road links as the priority.

Under the working group, expert subgroups will be established to determine projects together with the necessary resources and activities for their implementation.

By March 1, the working group will come up with a detailed plan for the restoration and construction of infrastructure necessary for safe transportation in the region.

Hostilities flared up in late September and the Azerbaijani military pushed deep into Nagorno-Karabakh and surrounding areas.

Under the peace deal reached on Nov 9, Russia has deployed about 2,000 peacekeepers to Nagorno-Karabakh.

The deal envisaged the reopening of transport routes, including a corridor linking Azerbaijan and its Nakhchivan exclave that borders Armenia, Turkey and Iran. Armenia, in turn, will be able to use transit routes to Russia and Iran via Azerbaijan's territory.

Azerbaijan and its ally Turkey have shut their borders with Armenia ever since the Nagorno-Karabakh conflict erupted decades ago.