Iran, US tensions have world on edge 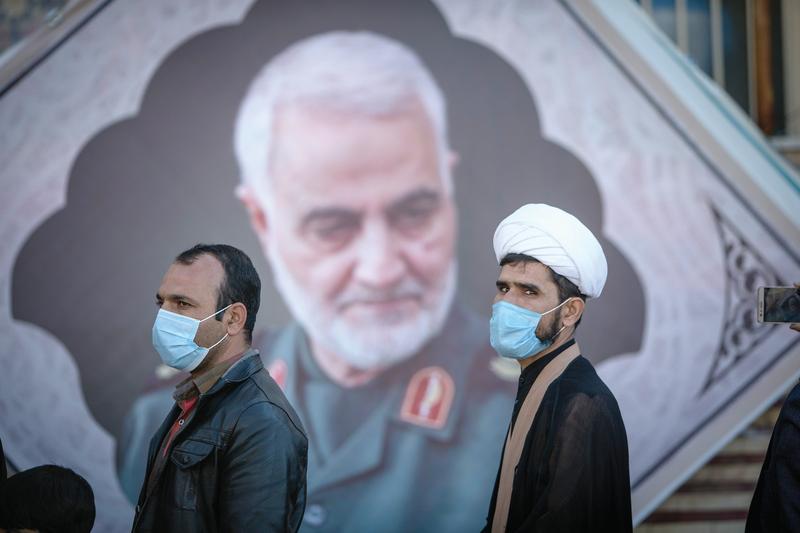 People walk past a portrait of Qassem Soleimani, the slain commander of Iran’s Islamic Revolutionary Guard Corps, near his grave in Kerman, Iran, on Jan 2, a day before the nation observed the first anniversary of his targeted killing in a US airstrike. (AHMAD HALABISAZ / XINHUA)

Amid rising tensions between the United States and Iran, a member of a Washington-based think tank said that the best path to de-escalation and nonproliferation is for the US to return to the Joint Comprehensive Plan of Action or JCPOA.

Barbara Slavin, director of Future of Iran Initiative at the Atlantic Council, expects “a very tense two weeks” as the US undergoes a leadership shift from President Donald Trump to his successor, Joe Biden, on Jan 20.

that the Iran nuclear issue was at a critical point in a complicated and sensitive situation. She appealed to all parties to maintain calm and restraint, and adhere to the consensus on upholding the JCPOA.

Hua said the most urgent issue is that all parties should “push the US to unconditionally return to the JCPOA as soon as possible” and also back the lifting of sanctions against Iran.

Slavin believes Iran “will not directly attack US forces” but instead “raise pressure in other ways”.

“My hope is that we can avoid a military clash that would further wreck US-Iran relations and roil the region,” Slavin said. “Frankly, Iran is behaving more rationally these days than the Trump administration.”

In recent days, there had been increased concern and vigilance about what Iranian-backed forces might do in the lead-up to the anniversary of the US drone strike that killed top Iranian general Qassem Soleimani in Iraq.

Iran on Jan 3 marked the first anniversary of the assassination of Soleimani, former commander of the Quds Force of the Islamic Revolution Guards Corps, after Trump ordered a strike near the Iraqi capital of Baghdad last year.

Iranian Foreign Minister Mohammad Javad Zarif said earlier on Twitter that Iran “will not rest until the perpetrators of Soleimani’s assassination are brought to justice”, and accused the US of violating international law and the United Nations’ Charter in a clear violation of Iraq’s sovereignty.

Zarif also warned of a possible plot by the US to “fabricate a pretext for war” and criticized Washington for wasting billions in military deployment “instead of fighting COVID-19”. He said Tehran does not seek war, but will defend its people, security and vital interests “openly and directly”.

On Jan 3, the Pentagon announced that US aircraft carrier USS Nimitz would remain in Middle East waters, reversing a previous decision to order its warship back home after a nearly 10-month deployment, alleging intelligence information on Iran threats.

Washington blames Iran-backed militia for regular rocket attacks on US facilities in Iraq, including near the embassy. No groups backed by or affiliated with Iran have claimed responsibility.

On Jan 4, Iran began enriching uranium to levels unseen since its 2015 nuclear deal with world powers as well as seized a South Korean-flagged tanker near the crucial Strait of Hormuz for breaking “environmental laws”.

The Iranian parliament had passed a bill on Dec 1 that included boosting Iran’s uranium enrichment in case the signatories to the 2015 deal fail to protect Iran’s interests amid US energy and banking sanctions.

According to a report by Reuters, South Korea summoned the Iranian ambassador and called for the release of MT Hankuk Chemi and its 20-member crew, adding it was dispatching a delegation to Iran to discuss the matter. Iranian state television cited a Tehran government official as saying the visit had been scheduled earlier, to discuss frozen funds. Iran’s foreign ministry reportedly said the visit was not linked to the tanker.

The Atlantic Council’s Slavin said the move to enrich to 20 percent — as called for in legislation passed by the Iranian parliament on Dec 1 — is “one way for Iran to accumulate ‘leverage’” to counter those who say Biden should keep US sanctions in place and not quickly return to compliance with the 2015 nuclear deal.

In 2015, Iran entered into a deal with the US, the United Kingdom, France, China, Russia and Germany, known as the “P5+1”. Iran committed to scale down its nuclear activities and to allow in international inspectors in exchange for lifting economic sanctions that have crippled the country.

Biden was the US vice president under the Barack Obama administration that negotiated the 2015 deal.

In May 2018, Trump withdrew from the deal and reinstated harsh sanctions against Iran. In response, Tehran gradually dropped some of its JCPOA commitments.

On Jan 5, the Russian Foreign Ministry blamed the US for Iran’s recent decision on enhancing its uranium, adding that the “root cause” of Iran’s deviations is the systemic, gross violations of international obligations by the US.

The European Union said it was highly concerned over Iran’s uranium enrichment. Peter Stano, a spokesperson for the bloc’s external action service, said at the European Commission’s daily briefing that Iran’s decision was “regrettable”.

Stano noted that the move would have serious implications on the Nuclear Non-Proliferation Treaty as it is “in breach of Iran’s nuclear commitments”.

But the Iranian Foreign Minister contested this in a tweet on Jan 4, saying the move fully conforms to the JCPOA, adding that the measures were fully reversible upon full compliance by all.

“Biden has promised to return to the JCPOA if Iran does and that is still our best path to de-escalation and nonproliferation. Ideally, this should take place in the first 100 days of Biden’s term to avoid bumping up against Iranian presidential elections in June,” said Slavin.

Berlin-based Ali Fathollah-Nejad, a non-resident senior research fellow at the Afro-Middle East Centre, South Africa’s think tank specializing on the Middle East, said Iran’s uranium enrichment and its seizing of a South Korean vessel in the Persian Gulf are “both shows of force”, albeit “with different rationales and intentions”.

Nejad said the decision to enrich uranium to a level of 20 percent represents the partial implementation of a legislation passed by the conservative-controlled Parliament and then quickly ratified by the hardline-dominated Guardian Council.

Nejad, who is also author of an upcoming book Iran in an Emerging New World Order: From Ahmadinejad to Rouhani, said the “moderate Rouhani administration” had opposed the bill pushed by its domestic rivals, arguing that it would undermine prospects of renewed diplomacy once the Biden administration takes office on Jan 20

and more recently passed a bylaw delaying the implementation of that legislation.

Hence, he said, the sudden decision to boost enrichment to 20 percent, which is alienating Western powers, can be seen as an affront against Iranian President Hassan Rouhani by his domestic hardline rivals (who are in charge of the nuclear program, while dominating the national security discourse) aimed at “torpedoing the administration’s ability to meaningfully enter into talks with the US” ahead of the June presidential elections in Iran (which, barring a Rouhani administration’s diplomatic success with Biden, is expected to be won by a conservative or hardliner) and reap the diplomatic benefits from them.

Rather, Nejad said, the hardline establishment wants to reap those benefits for themselves after the June elections.

“Although there is cross-factional elite consensus as to the strategy to boost various components of the nuclear program in order to elevate Iran’s bargaining leverage in view of potential upcoming talks, it seems that creating alarmism among Western powers in the aim to ultimately see onerous sanctions eased as a result of negotiations can be counter-productive,” Nejad said.

“However, this has precisely been the Iranian nuclear strategy preceding the JCPOA negotiations a decade ago.”

Meanwhile, said the scholar-author, the seizure of the tanker incident has less to do with the official explanation that the vessel was polluting the Persian Gulf with chemicals, but rather is connected to Iran’s $7 billion assets held by Seoul for its crude oil imports from Iran.

“Now, because of US extra-territorial sanctions illegalizing bank transfers — especially in US dollars — to Iran, these funds have been de facto blocked in South Korea. One of Iran’s top oil importers, South Korea has dramatically reduced and even halted its oil exports as a result of the pressure exerted by US sanctions, with Washington being an indispensable ally of Seoul,” said Nejad.

“Iran’s move is geared towards putting pressure on South Korea to release those Iranian assets. Whether the seizure will lead to Iran ending Seoul’s reluctance to release those funds is more than questionable.”

Jan Yumul in Hong Kong contributed to this story.