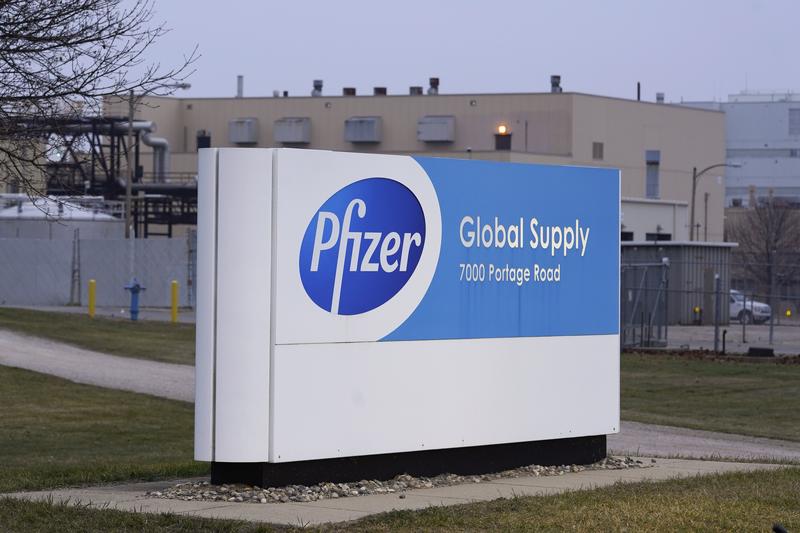 ROME / JOHANNESBURG / ADDIS ABABA - The United States said it authorized the use of Pfizer Inc’s COVID-19 vaccine on Friday, with the first inoculations expected within days, marking a turning point in a country where the pandemic has killed more than 295,000 people.

The US Food and Drug Administration granted an emergency use authorization for the vaccine, developed with German partner BioNTech, which was shown to be 95 percent effective in preventing the disease in a late-stage trial. It said the vaccine can be given to people aged 16 and older.

Healthcare workers and elderly people in long-term care facilities are expected to be the main recipients of a first round of 2.9 million doses this month.

BioNTech Chief Executive Ugur Sahin said the vaccine “will help to save lives across the United States and could accelerate a return to normality.”

US health authorities, shipping services, hospitals and pharmacies have been readying a nationwide inoculation campaign. Pfizer said it would start shipping immediately and state public health systems have been planning to begin shots as early as Monday.

The government plans to accelerate vaccinations in the coming weeks and months, especially if a second vaccine from Moderna Inc is quickly approved. An advisory group to the US Centers for Disease Control and Prevention will meet on Saturday to make crucial recommendations about whether some groups such as pregnant women and 16-year-olds should be immunized. 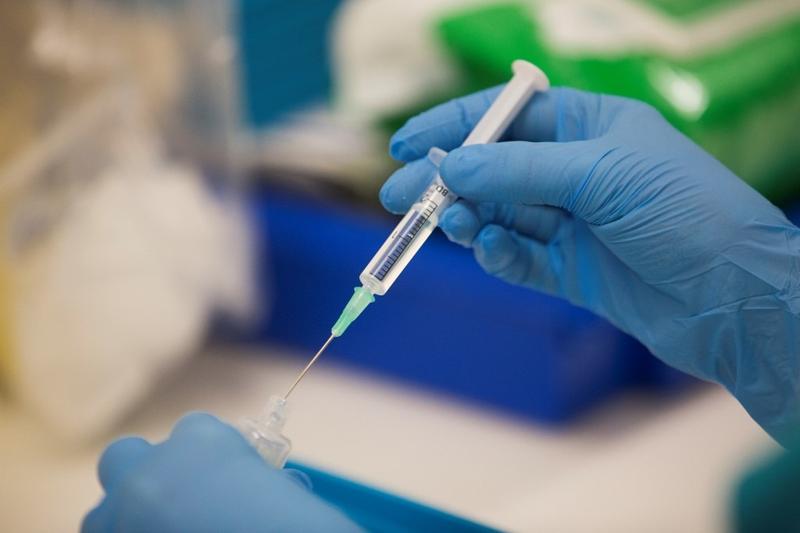 In this file photo taken on Dec 8, 2020, a member of staff draws the Pfizer-BioNTech COVID-19 vaccine out of a vial at the Southmead Hospital, Briston. (GRAEME ROBERTSON / AFP / POOL

The authorization comes as cases are surging in the United States, with thousands of death per day, while hospital intensive care units across the country are nearing capacity, threatening to overwhelm healthcare systems.

The Pfizer/BioNTech vaccine was first approved in Britain earlier this month, and UK residents began receiving the shots on Tuesday. Canada also authorized the vaccine and expects to start inoculations next week.

Mexico and Bahrain have also approved the vaccine.

The US reported 3,309 more virus-related fatalities on Friday, a new daily record that took the country’s death toll from the pandemic to 295,450. Daily infections surged by a record 231,711, taking total cases to 15.8 million.

Global COVID-19 cases surpassed 70 million on Friday, according to the Center for Systems Science and Engineering (CSSE) at Johns Hopkins University.

Countries with more than 1.8 million cases also include Russia, France, Britain and Italy while other countries with over 50,000 deaths include India, Mexico, Britain, Italy, France and Iran, according to the CSSE tally.

Sweden faces a shortage of health-care workers as the number of resignations ticks up after a relentless year of caring for Covid patients.

Sineva Ribeiro, the chairwoman of the Swedish Association of Health Professionals, says the situation is “terrible.”

Even before the first wave of the pandemic back in March, there was “a shortage of specialist nurses, including at ICUs,” she said in a phone interview.

The development shows that even countries with universal health-care systems are now struggling to keep up with the Covid crisis. This week, Stockholm’s intensive care capacity hit 99 percent, sending the city into a panic and prompting calls for outside help.

But even if more ICU beds are provided, the bigger concern now is whether Sweden has enough health-care workers with the skills needed to look after the country’s sickest patients.

Ribeiro says that already back in May, members of her union “warned of an untenable situation.” There are fewer qualified people available now than there were in the spring, “which makes it harder to expand ICU capacity,” she said.

Health-care professionals have emerged as the heroes of the Covid crisis, often drawing cheers from grateful onlookers as they emerge from hospitals after long and grueling shifts.

But increasingly, staff are so desperate for some real time off that they see resignation as the only way out, Ribeiro said. A survey by broadcaster TV4 showed that in 13 of Sweden’s 21 regions, resignations in the health-care profession are now up from a year ago, at as many as 500 a month.

The World Health Organization will review vaccines by Pfizer, BioNTech, Moderna and AstraZeneca over the “next couple of weeks” to determine whether to grant them emergency-use licenses, WHO Chief Scientist Soumya Swaminathan said Friday. Several countries and global procurement agencies such as UNICEF rely on WHO’s pre-qualification services for vaccines and drugs, Swaminathan said.

The health ministry confirmed 761 new fatalities from the virus over the past day, taking the national death toll to 63,387, the second highest in Europe after Britain.

South Africa on Friday reported 8,319 new coronavirus cases over the past 24 hours, bringing the national tally to 845,083, the country's health ministry reported.

Meanwhile, 205 more COVID-19 deaths were recorded, taking the country's death toll from the disease to 22,952, it said.

The ministry also reported a total of 758,373 recoveries from the disease to date.

Meanwhile, 12 more COVID-19 deaths were recorded, taking the nationwide count to 1,791, she said.

The minister also said that with 2,234 new recoveries registered, the national total amounted to 91,209.

Ireland on Friday reported 313 new COVID-19 cases over the past 24 hours, bringing the national tally to 75,507, the country's National Public Health Emergency Team said in a statement.

As of Friday afternoon, hospitalizations stood at 197 with 35 patients in intensive care units.

Portugal on Friday reported 5,080 new coronavirus cases over the past 24 hours, bringing the national tally to 340,287, the country's Directorate-General of Health reported.

Argentina registered 7,112 new COVID-19 cases in the past 24 hours, raising the national tally to 1,489,328, the ministry of health reported on Friday.

The ministry said 178 patients died of the disease in the same period, bringing the nationwide death toll to 40,606.

Meanwhile, 1,324,792 patients have so far recovered in the country.

Denmark registered 3,075 new COVID-19 cases over the past 24 hours, bringing the nationwide tally to 103,564, said the Danish health authority on Friday.

Denmark's Minister for Health and Elderly Affairs Magnus Heunicke announced on Thursday an extension of the country's partial lockdown measures as of 4 p.m. local time (0300 GMT) Friday. Around 80 percent of the population have come under the restrictions, local media reported.

Brazil's COVID-19 death toll rose to 180,437 on Friday after 672 more deaths were reported in the last 24 hours, the Brazilian Ministry of Health said.

Sao Paulo, the most-affected state in the country, imposed new lockdown measures from Saturday until Jan. 12 to prevent nighttime crowds as the Christmas and New Year holidays approach.

The government of the state of Mato Grosso do Sul decreed that for 15 days starting from Monday, a night curfew from 10 p.m. to 5 a.m. will be imposed to avoid more infections or the collapse of the hospital system.

A total of 21 states plus the Federal District of Brasilia have been experiencing an upward trend in COVID-19 cases and deaths since the second week of November.

Switzerland and Liechtenstein on Friday reported 5,136 new COVID-19 cases over the previous day, bringing their combined tally to 373,831, according to data published by the Swiss Federal Office of Public Health.

There have been 106 more deaths from the virus, and the death toll stands at 5,396 as of Friday afternoon, the office said.

The Federal Council of Switzerland outlined new rules that will go into effect on Dec. 12 to curb the increasing rate of COVID-19 infections ahead of Christmas, according to local media.

France registered 13,406 COVID-19 cases in the past 24 hours, pushing the total to more than 2.35 million, while hospitalization-related figures continued the downward trend, data released by health authorities showed on Friday.

Since the country reported its first COVID-19 death in mid-February, a total of 57,567 people have died in hospitals and nursing homes, according to the health authorities.

Hospital admissions fell by 256 to 24,975, while the number of patients in intensive care units (ICUs) dropped by 75 to 2,884, maintaining a running slowdown first recorded on Nov. 14.

Thanks to a night-time curfew and nationwide lockdown introduced in October, France's number of new infections decreased to around 10,000 per day from nearly 50,000 in late October and pressure on hospitals had eased.

The number of people with COVID-19 decreased by 6 percent this week, compared to a 31-percent fall a week earlier, indicating "a high risk of the virus resurgence in the coming weeks," the country's Public Health Agency said in a report Friday.

The daily COVID-19 infections and deaths kept climbing in Germany and reached new highs on Friday, according to data from the Robert Koch Institute (RKI).

Germany reported a record 29,875 new infections within one day, pushing the total to over 1.27 million, according to the federal government agency for disease control and prevention.

The COVID-19 incidence in the last seven days reached a new record at 156 cases per 100,000 inhabitants in Germany on Friday, according to the RKI. At the beginning of November when Germany entered the partial lockdown, the 7-day incidence stood at around 120.

In view of rising infections, there is an ongoing discussion in Germany about a hard lockdown over the Christmas holidays. Chancellor Angela Merkel is expected to meet with the minister presidents of the federal states on Sunday to discuss stricter nationwide measures.

With the highest 7-day incidence of 313, the eastern German state of Saxony already announced a hard lockdown. Starting next Monday, schools, day-care facilities and non-essential shops will be closed.

Britain reported another 21,672 COVID-19 cases on Friday, bringing the country's total to 1,809,455, according to the latest official figures.

Meanwhile, data from the Public Health England (PHE) showed Thursday that London recorded an average infection rate of 191.8 per 100,000 people for the week between Nov. 30 and Dec. 6, the highest in England.

PHE's data came after London mayor Sadiq Khan warned Londoners that the city risks moving from Tier 2 to the highest Tier 3 restrictions amid the surge in cases.

Hospital occupancy in Mexico City, where 78% of general hospital beds are taken, is accelerating and the capital needs to take urgent action to slow the virus, Lopez-Gatell said.

Canada will begin its immunization campaign as early as Monday, with 30,000 initial doses of the Pfizer Inc. and BioNTech SE vaccine making their way from Belgium.

Quebec, which has suffered the majority of Canada’s more than 13,000 virus deaths, said it expects inoculations to start Monday. Ontario is targeting Tuesday and will give priority to health-care workers.