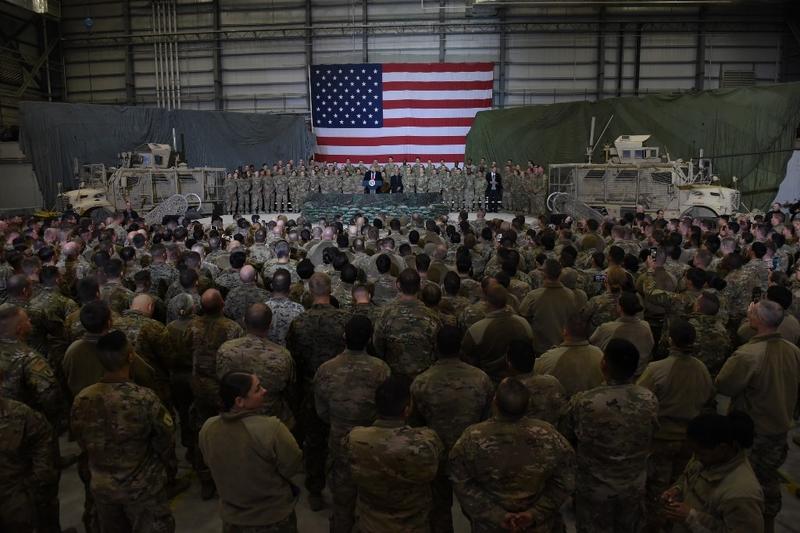 In this Nov 28, 2019 photo, Afghan President Ashraf Ghani and US President Donald Trump speak to US soldiers during a surprise Thanksgiving day visit at Bagram Air Field in Afghanistan. (OLIVIER DOULIERY / AFP)

Afghanistan’s government is struggling to maintain its grip on power after US President Donald Trump’s decision to accelerate US troop withdrawal from the war-torn nation emboldened the Taliban and other militant groups.

The United Nations has noted a dramatic surge in violence since Afghanistan President Ashraf Ghani’s government and the Taliban began peace talks in September, ranging from attacks on Afghan army bases to attempts to capture key cities including Kandahar. Terrorists have launched assaults on Kabul University and other educational centers, killing dozens of students and on Saturday, unknown assailants fired a deadly barrage of rockets that struck residential areas in the capital.

Trump’s decision to drawdown US troops sooner, especially without any reciprocity from the Taliban, gives militants a free hand to try and gain control over the country by violent means, according to Michael Kugelman, senior associate for South Asia at the Wilson Center in Washington. Meanwhile, expecting a surge in violence, many Afghans are fleeing the nation.

“The prospects of civil war increase when the US troop presence is no more,” Kugelman said, adding that the absence of American air power opens up the possibility of the insurgent group making a push into cities. “Once the Taliban starts taking urban territory, it will be easier to gain more political power, and from that point it’s easier to seize power on the whole.”

Some of the recent violence has been blamed on the Taliban, who have ignored Ghani’s warnings about using the attacks to gain leverage in the peace talks. The Islamic State, active in several parts of the country, has claimed responsibility for other attacks.

Experts and even some top officials in Ghani’s administration have warned that even worse scenarios are possible.

Meanwhile, Afghans have been voting with their feet.

In a quiet exodus driven by an absence of hope, nearly half of all refugee arrivals in Greece are from Afghanistan, which by the end of last year was the country with the highest number of migrants, according to International Organization of Migration figures.

“We’re all in a limbo now,” said Kamila Zafari, 24, a student at Kabul University. “The country has weak leadership but a strong Taliban who know only killing. In this anarchic situation, the US leaving further adds to our desperation and fears.”

The militant group has welcomed the news that the US will reduce troops from about 4,500 to 2,500 by Jan 15, with Trump looking to a complete withdrawal by May 2021 to deliver on his longtime pledge to exit from his country’s “endless wars.”

“The new US administration should focus on the implementation of the US-Taliban agreement as it the most reasonable and effective tool for ending the war between our countries,” Taliban spokesman, Zabihullah Mujahid said about US Democrat Joe Biden, in a WhatsApp message this week. The Taliban seek “positive relations” with all countries including the US in the future, he said. 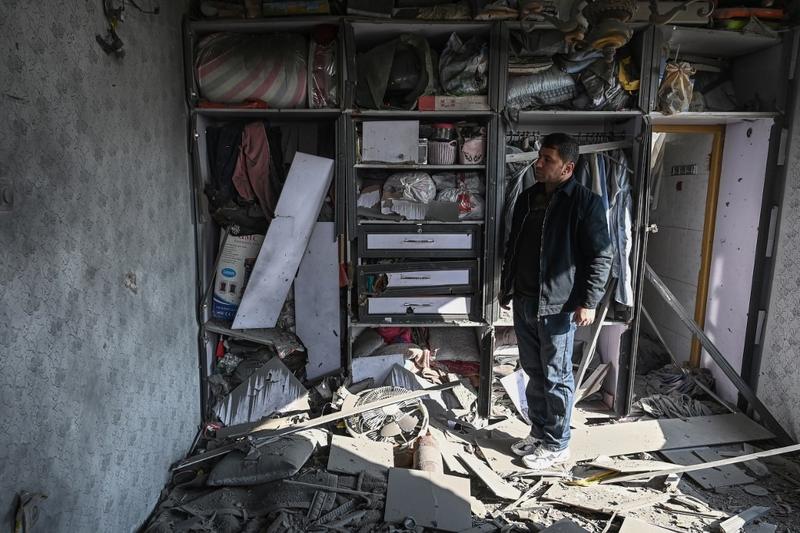 After being toppled by the US invasion in 2001, the Taliban were pushed to the margins, before starting to regroup in 2004. They re-emerged as a potent threat to the US and its Afghan government allies since 2009 and now control about half the country.

The Ghani administration and the insurgents have been locked in a delicate dance, made more complicated by the peace deal the Taliban entered with the US in February. That agreement paved the way for the start of the US-brokered talks between the government and militants in Doha on Sept 12. Those have made little headway with both sides failing to agree on even the most basic issues so far.

And while the Doha process plays in the background, both sides remain bitter antagonists on the ground in Afghanistan.

The Taliban haven’t minced words in denouncing the officials and troops working for Ghani’s government as un-Islamic mercenaries whose “killing is not prohibited.”

While some in the Afghan government, like Mohib, have voiced concerns about the growing intransigence of the Taliban, others have tried to downplay the impact of the US troop cuts and early departure.

READ MORE: Afghan woman shot, blinded, for getting a job

The country’s acting Defense Minister, Asadullah Khalid, told parliament on Tuesday that Afghan troops were now carrying out almost all counter-terrorism operations on their own. He cited major attacks in Helmand and Kandahar last month where government soldiers were able to kill thousands of Taliban militants in a weeks long standoff.

But the government is also still holding onto hopes that American influence may turn the intra-Afghan peace talks around. The country’s Second Vice-President, Mohammad Sarwar Danish, recently called on the new US administration to “fully review” the peace talks and pressure the Taliban to give in and accept a cease-fire.

“The Taliban have become very powerful and now control many remote areas despite the presence of NATO, US, and the Afghan government,” said Ahmad Saeedi, an independent political analyst in Kabul and a former Afghan diplomat in Pakistan. “Ghani’s government alone seems to be unable to stop Taliban ambitions.”