After a tough year, the National Center for Performing Arts sets a tone of optimism, announcing its upcoming musical calendar, Chen Nan reports.

The China NCPA Orchestra holds a ceremony to mark its 10th anniversary after an open rehearsal at the National Center for the Performing Arts in Beijing on Nov 12. (JIANG DONG / CHINA DAILY)

On Nov 12, the China NCPA Orchestra announced its 2020-21 season at the National Center for the Performing Arts in Beijing, which features programs presenting music by Ludwig van Beethoven, Gustav Mahler, among others, as well as the world premiere of works by Chinese composers.

The season kicked off with two concerts held at the NCPA on Nov 12 and Nov 14, featuring the orchestra performing Beethoven's epic piece, Incidental Music to Goethe's Egmont, Op 84 under the baton of conductor Lyu Jia.

Beethoven started to write the piece in the autumn of 1809 and, in 1810, it premiered with a sequence of 10 incidental pieces composed for full symphony orchestra, soprano soloists and a male narrator. During the version performed by the orchestra, the musicians were joined by Sun Qiang, an actor of the National Theater of China and soprano Song Yuanming.

"The 2020-21 season marks the 10th season for the China NCPA Orchestra. The original plan was to have an 18-month-long session from this March," says the orchestra's director Ren Xiaolong, adding that they planned to have world-renowned conductors, including Daniel Gatti, Marin Alsop, Chung Myung-whun and Zhang Xian, collaborate with the orchestra during the season. "We have to make changes to the programs due to COVID-19." 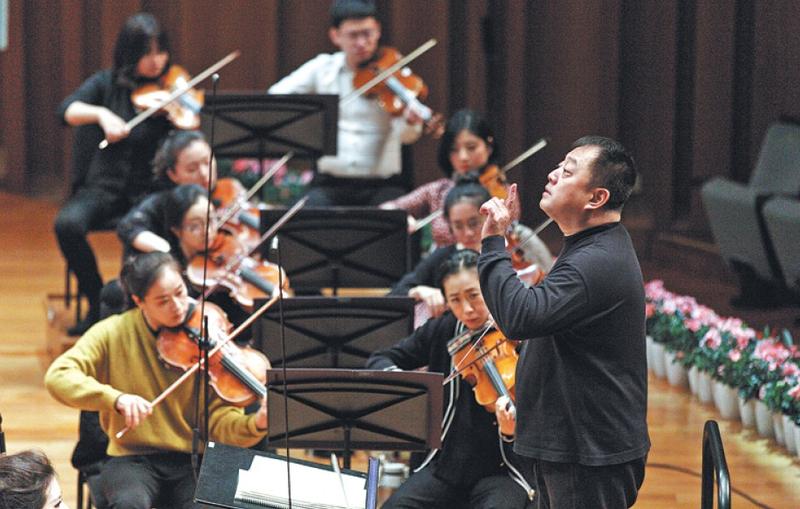 The 2020-2021 season that will be delivered by the orchestra is quite different, as Ren says, "it pays tribute to the continuously innovative human spirit".

Paraphrasing a line from the Confucian classic The Book of Rites, which translates roughly as, "If you can improve yourself in a day, do so each day, forever building on that improvement and you will evolve", the orchestra has adopted it as the 2020-21 season's theme: ri xin in Chinese, "evolution" in English.

"For all the musicians of the orchestra, who didn't perform together onstage for months, the season means a new beginning. For the audiences, who were not able to enjoy live concerts at the NCPA, it's also a reunion with classical music," says Ren, adding that the orchestra has performed 38 online concerts since April, which received warm feedback from audiences.

Marking the 250th anniversary of Beethoven's birth, the orchestra will present the Beethoven 250 series, performing the German composer's nine symphonies and his 11 overtures under the baton of music director Lyu Jia. 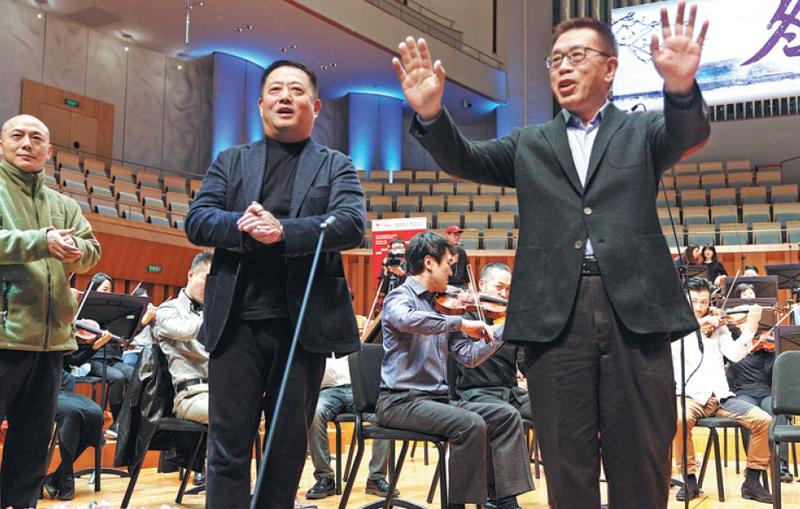 On Feb 25 and Feb 26, the NCPA Quartet, featuring violinists Li Zhe, Liu Xian, violist Zhuang Ran and cellist Liang Xiao, will perform Beethoven's string quartets, String Quartet No 4 in C minor Op 18 and String Quartet No 6 in B flat major Op 18. They will also premiere a new piece that pays tribute to the great composer, About Beethoven, written by Chinese-Australian composer Julian Yu.

Yu, 63, who was born in Beijing and graduated from the Central Conservatory of Music in 1977, moved to Australia in 1985 and teaches at the University of Melbourne. Commissioned by the orchestra, the composer's piece, Evolution, will premiere on Dec 20. Echoing the theme of the orchestra's 2020-21 season, the piece also celebrates the 13th anniversary of the NCPA.

The year 2020 also marks the 160th anniversary of Mahler's birth. In the Mahlermania series, conductor Lyu leads the orchestra in performances of Mahler's The Song of the Earth, Song of a Wayfarer, and the unfinished Symphony No 10.

On March 12, the orchestra will premiere Chinese-American composer Bright Sheng's new piece, titled Roosters of Dawn, co-commissioned by the orchestra, Carnegie Hall and the National Arts Center of Canada. The piece embodies a cultural integration of the East and the West. 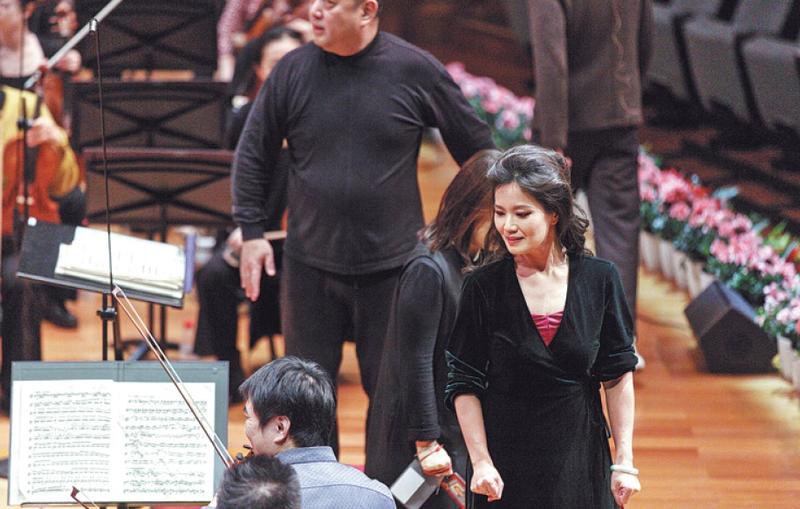 Veteran Chinese composer Zhao Jiping will be featured as the 2020-21 season's composer-in-focus, with the orchestra, performing his works, including Pipa Concerto No 2 and Violin Concerto No 1.

"I've worked with the China NCPA Orchestra many times and they've premiered some of my compositions. Those young musicians fill me with the passion and desire for creation," says Zhao, 75, who is known for his film scores for Chinese director Zhang Yimou's Raise the Red Lantern (1991) and To Live (1993), as well as director Chen Kaige's Farewell My Concubine (1993). He has been commissioned by the orchestra to write a new symphonic choral work, titled The Story of Flowers.

As the NCPA's resident orchestra, it has grown to be a mainstay of its home theater since its founding in 2010.

In 2014, the orchestra undertook its first North American tour and returned there in 2017, when it performed at Carnegie Hall, Chicago Symphony Center, Davies Symphony Hall and other major venues in the US and Canada, under the baton of Lyu.

"When we perform together as a symphony orchestra onstage, we speak with our musical language, which speaks to the imagination of the audience. That's the most beautiful part about enjoying a classical music concert," says Lyu. "We feel proud of what we've achieved. As a symphony orchestra, we are still very young." 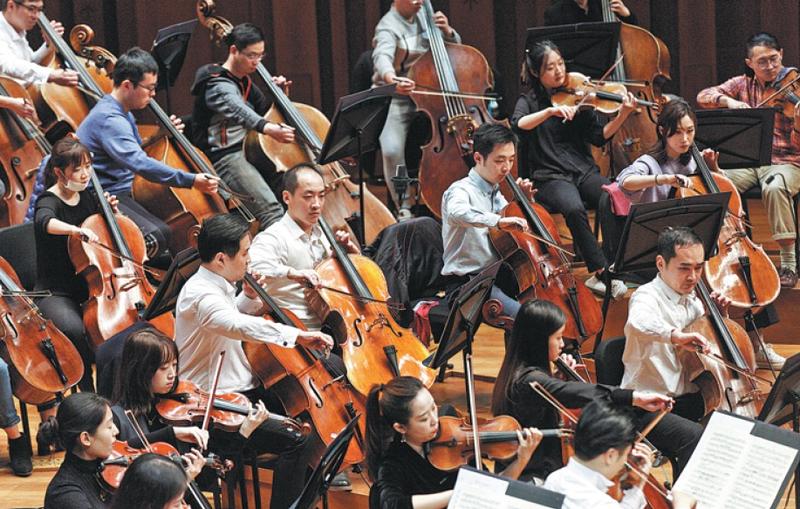 Violinist Li Zhe joined in the orchestra a year after it was founded.

"Like many of my colleagues, we started to play with the orchestra in our early 20s and now we are in our 30s. We've married and had children since. Being a member of the orchestra for 10 years is a great part of our lives," says Li.

"One of my teachers told me that the major function of music is to comfort people. I totally agree with that. Especially when we are going through the pandemic, we need music," says Li.