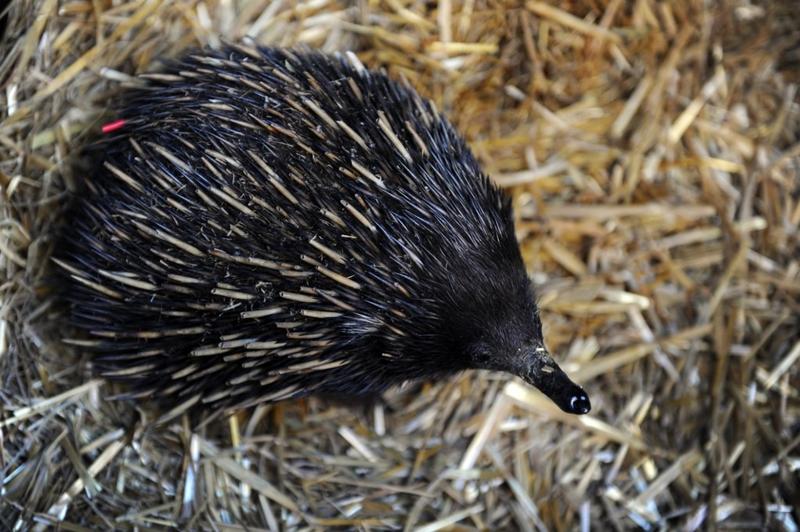 SYDNEY - A lucky echidna puggle, or baby spiny anteater, that survived an attack by birds and fell from a tree is taking its first steps as zoo keepers in Australia hand-feed the young mammal.

Members of the public brought the young echidna to the Taronga Zoo in Sydney last month after it fell 4 m from a tree onto their balcony, somehow escaping becoming supper for the winner of a clash between a raven and a magpie.

“He was lost from his mum and the story is that some people were just sitting on their balcony one nice afternoon and they heard this thud and they looked down and they saw this little guy on the balcony,” said Taronga Zoo Senior Keeper Sarah Male.

“And they’ve looked up into the tree and seen a raven and a magpie there.”

After recovering from scratches and peck marks, the puggle - grey, sharp-nosed and easily held in the palm of one hand - has put on weight and started to develop fur, Male said.

“While the puggle is improving every day, it is still very young and in the wild would still be dependent on mum, so will require ongoing care for the next few months,” she said in an emailed statement.

“I’ve hand-raised lots of animals throughout the years at Taronga but such a young echidna puggle is a new experience.”

The echidna will remain at the Taronga Zoo Wildlife Hospital until it grows spines and can feed itself. The zoo said it hasn’t made plans for the animal beyond that.

Echidnas and platypuses are the only two species belonging to the monotreme order of egg-laying mammals. Their young are known as puggles.