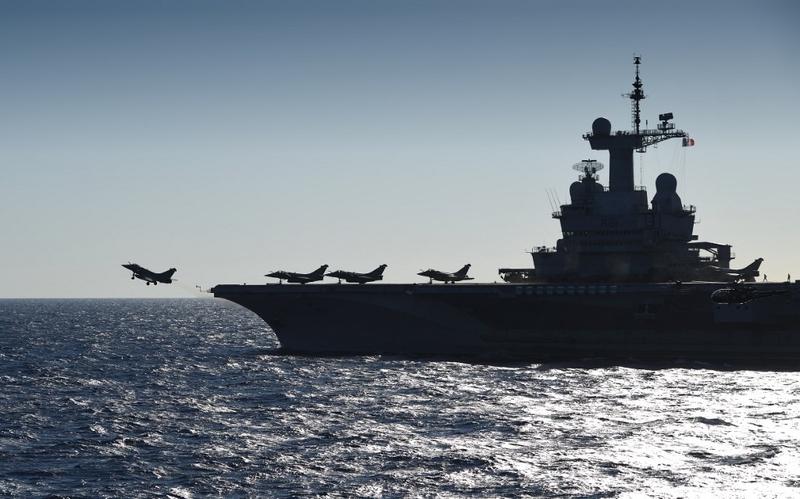 A rafale fighter jet takes off from the French aircraft carrier Charles de Gaulle sailing in the Mediterranean sea on Sept 29, 2016 as part of the Operation Arromanches III. (ERIC FEFERBERG / AFP)

PARIS/ANKARA - The French military conducted training exercises with Greek forces off the southern island of Crete on Thursday, defense sources said, as tension persisted with Turkey over disputed waters in the eastern Mediterranean.

Thursday’s exercise was the first manifestation of French President Emmanuel Macron’s commitment to temporarily reinforce his country’s military presence in the eastern Mediterranean. France has called on Turkey to halt oil and gas exploration in disputed waters.

The exercise came as the the French armed forces said that France will send two Rafale fighter jets and the naval frigate ‘Lafayette’ to the region  as part of plans to increase its military presence in the region.

The frigate and the jets had arrived in Crete earlier on Thursday and carried out joint manoeuvres with Greek forces, the Greek defense sources said.

The developments came a day after Macron voiced concern over “unilateral” exploration by Turkey in a call with Greek Prime Minister Kyriakos Mitsotakis, Macron’s office said in a statement. It added that prospecting should “cease in order to allow a peaceful dialogue” between the neighbouring NATO members. 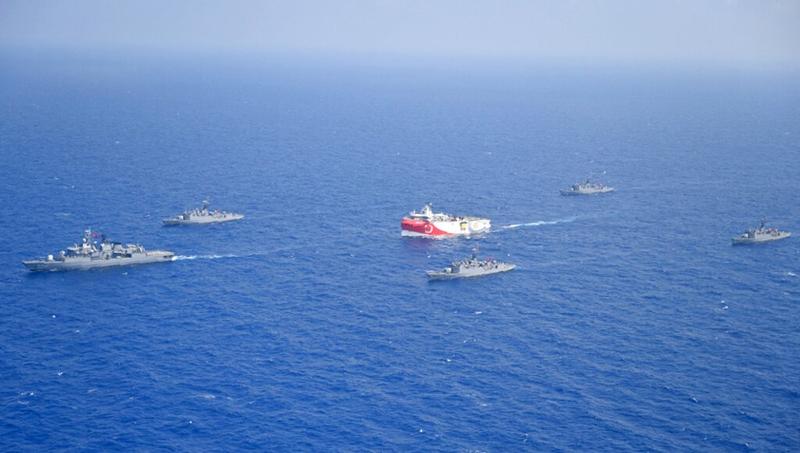 In this photo provided by the Turkish Defense Ministry, Turkey's research vessel Oruc Reis, in red and white, is surrounded by Turkish navy vessels as it was heading in the west of Antalya on the Mediterranean, Turkey, Aug 10, 2020. (POOL PHOTO / TURKISH DEFENSE MINISTRY VIA AP)

The standoff deepened this week with the arrival of Turkish seismic research vessel Oruc Reis in a disputed area of the Mediterranean, accompanied by warships.

France will “temporarily reinforce” its military presence, according to Macron’s statement, to “monitor the situation in the region and mark its determination to uphold international law”.

France will “temporarily reinforce” its military presence, according to Macron’s statement, to “monitor the situation in the region and mark its determination to uphold international law”

“Emmanuel Macron is a true friend of Greece and a fervent defender of European values and international law,” Mitsotakis tweeted, in French, after the call with Macron.

In Ankara, Turkish President Tayyip Erdogan said on Thursday that the only solution to Turkey’s dispute with Greece was through dialogue and negotiation, and Ankara was not chasing any “adventures” in the region.

Speaking to members of his ruling AK Party, Erdogan said the escalation of tensions in the region was caused by Greece, and urged Athens to respect Turkey’s rights. “The path to a solution in the eastern Mediterranean is via dialogue and negotiation. We are not chasing any unnecessary adventures or seeking tensions,” he said.

Turkey and Greece are at loggerheads over competing claims to natural gas reserves, brought into sharp focus by the attempts of EU member Cyprus to explore for gas in the eastern Mediterranean over Turkey’s strong objections.

Macron called last month for EU sanctions against Turkey for what he described as “violations” of Greek and Cypriot sovereignty over their territorial waters. Relations between Paris and Ankara have also frayed over the conflict in Libya.