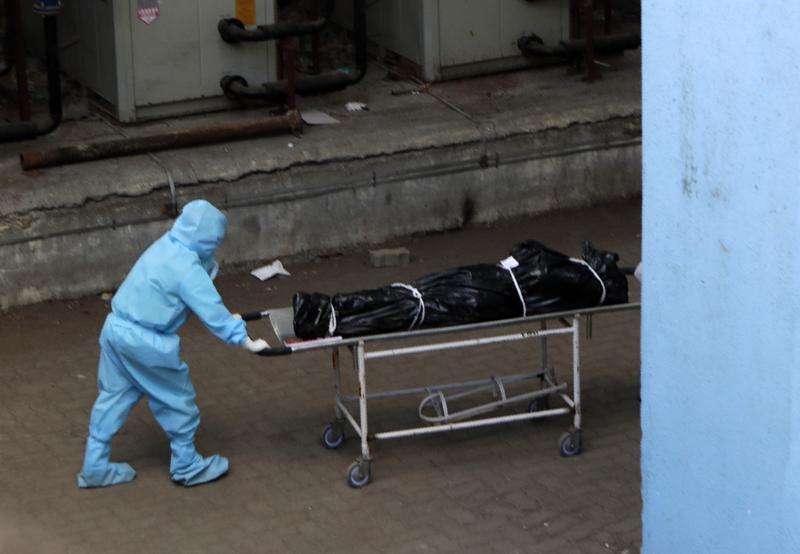 Hospital staff carry the body of a person who died of COVID-19 to a morgue in Mumbai, India, May 29, 2020. Most of the over 150,000 cases are concentrated in five of India’s 28 states, though an increase in cases has also been reported in some eastern states as migrant workers have begun arriving home from big cities on special trains. (RAJANISH KAKADE / AP)

In an open letter marking one year into his second term, Modi appealed to the country’s population of 1.3 billion to follow all lockdown rules to stop the spread of the pandemic.

The prime minister said there was a “long battle” ahead against the novel coronavirus that causes COVID-19.

India has recorded a total of 173,763 COVID-19 cases and 4,971 deaths, making it the ninth most-affected country globally, Reuters data showed

The government could extend the lockdown beyond May 31, a home ministry official said on Saturday. The home ministry did not immediately respond to a request for further comment.

India has recorded a total of 173,763 COVID-19 cases and 4,971 deaths, making it the ninth most-affected country globally, Reuters data showed.

While fatality rates in India have been lower than in worse-hit countries, experts warned that its peak has not been reached due to mounting cases of new infections.

Officials are also nervous about the pandemic spreading through villages as millions of jobless migrant workers return home from cities.

Rights activists and the opposition have criticised Modi’s handling of the pandemic, accusing him of announcing an abrupt lockdown that left the poor in the lurch and forced thousands to walk or jostle for space on buses and special trains to reach home amid the fear of getting infected.

Over 100 migrant workers have died either in accidents or due to starvation as they desperately tried to head back to their villages, the home ministry official said.

Meanwhile, at least two people working at India’s Foreign Affairs Ministry have tested positive for COVID-19, and the government has asked several officials to self quarantine as a precaution, according to a source and internal e-mails seen by Reuters.

One person who tested positive worked as a consultant in the ministry’s Central Europe division in New Delhi, while the other worked as a legal officer in the law division, the e-mails stated.

The Indonesian government will gradually open shopping malls, restaurants and entertainment sites from June in an attempt to jump-start the pandemic-hit economy, even as coronavirus cases continue to climb.

Resumption of activities will be prioritized in so-called green zones, which are areas with a coronavirus reproduction rate below 1, according to the Trade Ministry. There are currently 100 such green zones scattered across eight provinces, including the country’s capital Jakarta. Semarang, the capital of Central Java province, is deemed as one of the most ready locations, said Trade Minister Agus Suparmanto in a statement Friday. 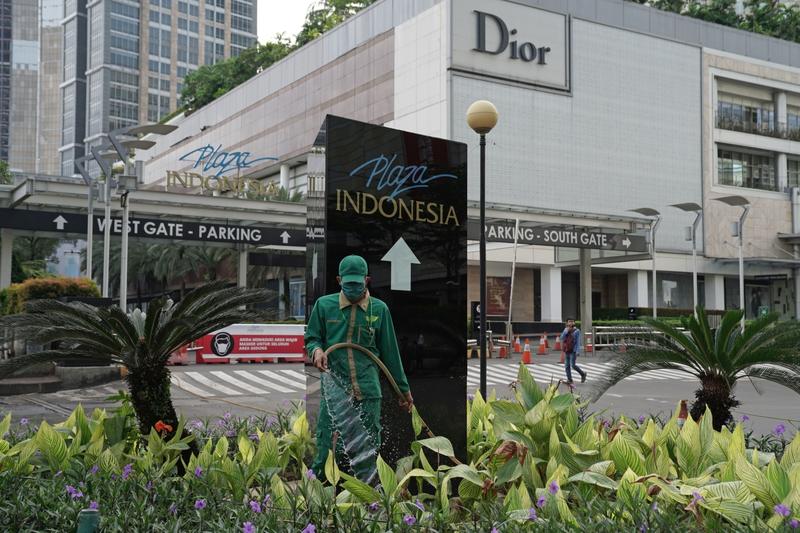 A worker wearing a protective mask waters the plants outside the Plaza Indonesia shopping mall during a partial lockdown imposed due to the coronavirus in Jakarta, Indonesia, on May 27, 2020. (PHOTO / BLOOMBERG)

A reproduction rate of 1 means that 10 infected people are estimated to infect an average of around 10 others.Indonesia reported on Saturday 557 new coronavirus infections, taking the Southeast Asian nation’s tally to 25,773, health ministry official Achmad Yurianto said.

Indonesian authorities have taken unprecedented emergency fiscal measures, including abandoning a budget deficit ceiling enacted in the wake of the Asian financial crisis, to lessen the impact of the outbreak. The government has said it is willing to widen its fiscal deficit further to help cushion the blow.

The resumption of activities in several West Java areas that are close to Jakarta is important as they contribute significantly to the economy, Suparmanto said. West Java, with its many industrial estates, is listed as the third-biggest contributor to the economy in the first quarter, according to the statistics bureau.

In the first phase set to be implemented on June 1, only shops selling health equipment or products will be allowed to operate. Stores selling other goods can operate in the second phase, scheduled for June 8. Hair salons, spas, museums and other places of entertainment will follow on June 15, while restaurants, bars and cafes will come next on July 6. The government expects to have all economic activities resume by early August.

A senior Ministry of Health official told reporters the total number of deaths remained at 115.

The vast majority of the newly infected people are migrant workers living in dormitories, the ministry said in a statement.

Thailand reported one new coronavirus case on Saturday and no new deaths, taking the total number of infections to 3,077 as local transmission of the new virus appears to wane.

The new patient arrived in Thailand via a land border with Malaysia earlier this week and has been in quarantine, said Panprapa Yongtrakul, a spokeswoman for the government’s Centre for COVID-19 Situation Administration.

Local infections have significantly slowed and over the last two weeks, 43 of 52 new cases were Thais who had arrived from abroad, Panprapa added.

The coronavirus has killed 57 people in Thailand since it was first detected in January.

Coronavirus infection rates have risen in Israel, particularly in schools, since the government began easing restrictions and it may reimpose them if the trend continues, the health ministry said on Friday.

The number of positive tests rose to 101 on Friday from four last Saturday and Prime Minister Benjamin Netanyahu will meet ministers and senior health officials on Saturday to decide whether to again close schools for some grades.

Breaking into a public holiday to sound a note of caution, Health Ministry director general Moshe Bar-Siman-Tov said some people had not been vigilant enough regarding social distancing, hygiene and wearing masks.

Though the number of daily tests has not changed, the rate of positive results has jumped to 1.5 percent from 0.5 percent, he told reporters.

After enacting restrictions early in the outbreak compared to most other countries, Israel began to ease its lockdown in mid April after a slowdown in infection rates.

Government employees went back to work in Iran on Saturday and President Hassan Rouhani said mosques are to resume daily prayers throughout the country, even though some areas are seeing high levels of coronavirus infections.

Rouhani also said on state television that the hours of shopping malls, which had been allowed to open only until 6 pm, will be extended, a further step in the government’s plans to ease coronavirus restrictions.

Authorities are taking tougher measures to ensure that health regulations are observed, including barring commuters not wearing masks from buses and metro trains, Iranian media reported.

Health Ministry spokesman Kianush Jahanpur said Friday there had been no deaths in the previous 24 hours in 15 of the country’s provinces and one in each of five provinces.

The provinces of Khuzestan in the southwest, and Baluchistan in the southeast of the country, have been declared “red” areas where there are still high levels of infection.

The health ministry has divided the country into white, yellow and red areas based on the number of infections and deaths. 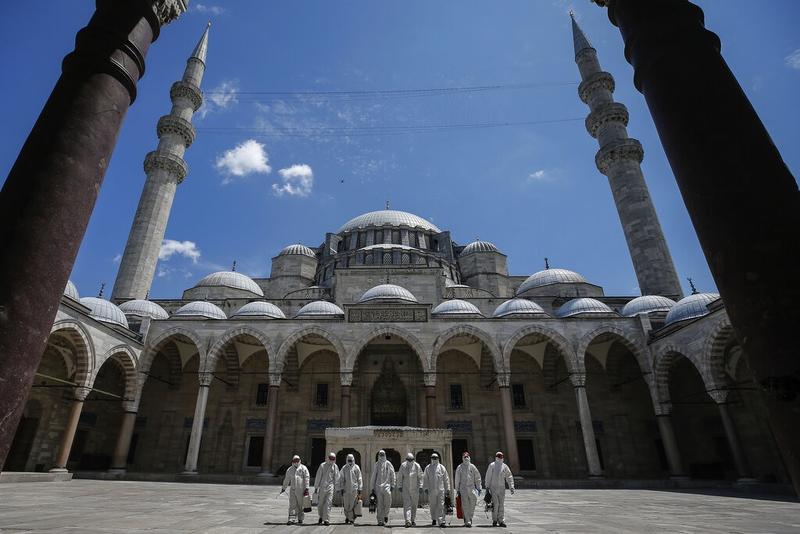 Municipality workers disinfect the grounds of the historical Suleymaniye Mosque, in Istanbul, during the third day of Eid el-Fitr and the last day of a four-day curfew due to the coronavirus outbreak, May 26, 2020. (EMRAH GUREL / AP)

Turkey conducted 36,155 tests for coronavirus in the last 24 hours, bringing the overall number of tests carried out to 1,964,364, the minister said.

A total of 125,963 patients have recovered in Turkey since the outbreak, while 662 patients are being treated at the intensive care units and 324 others being intubated.

The Iraqi Health Ministry on Friday said that the daily increase of COVID-19 cases in the country jumped to 416, the highest so far, bringing the total number of infections in the country to 5,873.

The new cases included 265 in the capital Baghdad, 31 in Dhi Qar, 28 in Karbala, 22 in Sulaimaniyah, 16 in Babil, 15 in Basra, 13 in Diyala, seven in Wasit, five in Najaf, four in Maysan, three each in Kirkuk and Muthanna, two in Salahudin and one each in Diwaniyah and Nineveh, the ministry said in a statement.

The statement also reported six more deaths during the day, five of them in Baghdad's hospitals and one in Basra, bringing the death toll in the country to 185, while 3,044 have recovered so far.

The new cases were recorded after 5,246 test kits were used across the country during the past 24 hours, and a total of 216,731 tests have been carried out since the outbreak of the disease, according to the statement.

Yemen's Health Ministry on Friday confirmed five new COVID-19 cases, bringing the total number of infections to 283 in the country's provinces controlled by the government.

According to a brief statement released by the country's supreme national emergency committee, the death toll from the deadly respiratory disease climbed to 65 after eight new deaths were recorded in the areas controlled by the Yemeni government.

The pro-government health authorities added that the number of recoveries remained at 11 since the outbreak of coronavirus on April 10.

Uzbekistan has extended measures to curb the spread of the coronavirus until June 15, but relaxed some restrictions, allowing the resumption of domestic tourism and soccer games, the authorities said on Saturday.

The former Soviet republic had locked down all its provinces and closed all non-essential businesses in March.

The Tashkent government eased some restrictions this month, dividing the country into “green”, “yellow” and “red” zones on the basis of the rates of newly-detected infections.

The new measures allow many businesses to reopen from June 1, depending on the zones the fall in, for example, in “green” zones, children’s summer camps, recreational and sports centres will start working and people will be allowed to hold weddings and other traditional ceremonies with up to 30 guests.

Central Asia’s most populous nation of 34 million, which resumed domestic air flights and train services this month, said the domestic football league would resume, without spectators, from June 5.

Deputy Health Minister Nurbolot Usenbaev said at his daily online news briefing that most of the new cases are close contacts of confirmed cases.

Among the new cases, 14 are medical workers, which raised their total number to 344, including 247 recoveries, Usenbaev said.

The total number of recoveries in the country stood at 1,113, after 25 more patients were discharged from hospitals, the deputy minister said, adding that currently, 593 patients are still in hospitals, among whom five are in intensive care.

The number of COVID-19 cases in the Maldives reached 1,591 on Saturday, according to data from the Heath Protection Agency (HPA).

Fourty-four additional COVID-19 cases including 13 Maldivians, 29 Bangladeshis and two Indians were confirmed on Saturday as of 3:30 am local time.