Insomnia and rise in anxiety emerge as big problems

By Zhou Wenting in Shanghai 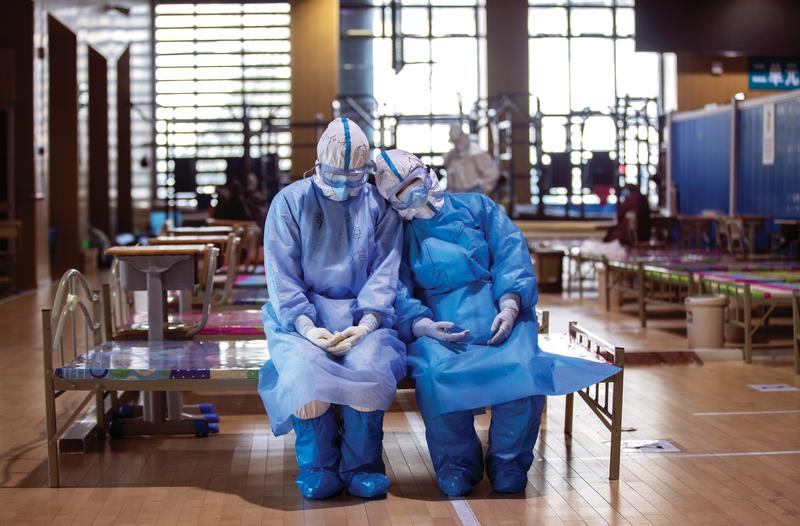 Peng Daihui, a chief physician at the Shanghai Mental Health Center, said that during a significant event such as the novel coronavirus outbreak, people undergo four mental stages — denial, anger, bargaining and depression — before reaching acceptance, the fifth and final process.

“Because of their professionalism, frontline doctors and nurses have been stoically experiencing the first four stages, and many are understandably encountering sleeping problems and anxiety,” Peng said.

“Patients and the public are also struggling through these stages, and more professional psychological assistance programs are needed.”

Chen Liangliang, a psychiatrist at Wuhan City No 3 Hospital in Hubei province, said more than 40 colleagues have sought help at his counseling room at the hospital, with insomnia being the most common problem.

When President Xi Jinping visited Wuhan, then epicenter of the outbreak on the Chinese mainland, on March 10, he reiterated the importance of psychological counseling and intervention for frontline workers, patients and the public.

More than 100 psychiatrists have been or are still working at hospitals in the city to help medical workers and patients, according to the National Health Commission. 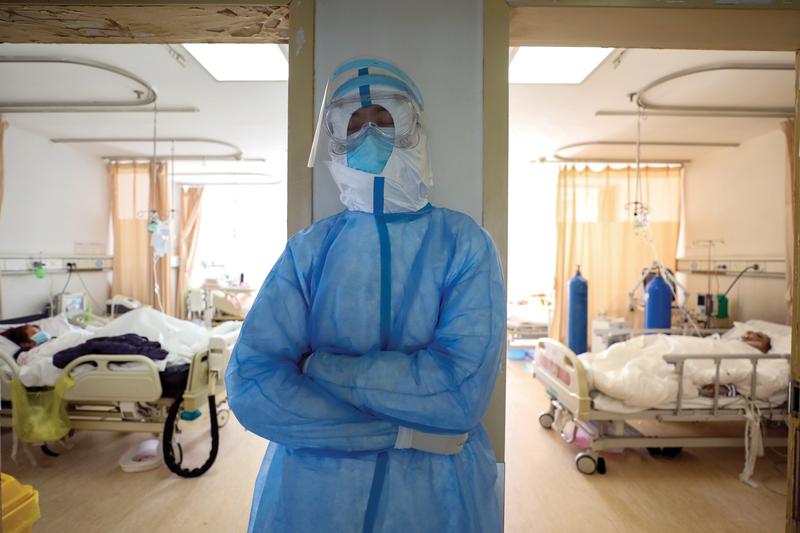 Chen said: “Doctors and nurses dedicated to saving lives in the quarantine wards are emotionally involved. Some were on the verge of a mental crisis without realizing it until they experienced serious symptoms, such as having insomnia for a week.

“As a result, they felt exhausted at work and turned to us for help.”

In addition to insomnia, symptoms of anxiety and depression include a fast heart rate, poor breathing, fatigue and gastrointestinal discomfort, said Chen, a chief doctor dispatched to Wuhan from the Changning District Mental Health Center in Shanghai.

He works with another psychiatrist and two nurses in the counseling room at the Wuhan hospital, where many patients in critical condition have been treated.

On Jan 26, the National Health Commission issued a guideline requiring provinces and cities to provide counseling and intervention services for people affected by the pandemic.

Feng Qiang, a psychologist from Shanghai East Hospital who is working in Wuhan, said stress among doctors and nurses is also the result of irregular working hours and having to stay alone in a hotel room when they are not on duty.

“Some people also develop a strong fear of the virus and become over-alert, while others feel that it is everywhere and dare not touch anything,” he said. 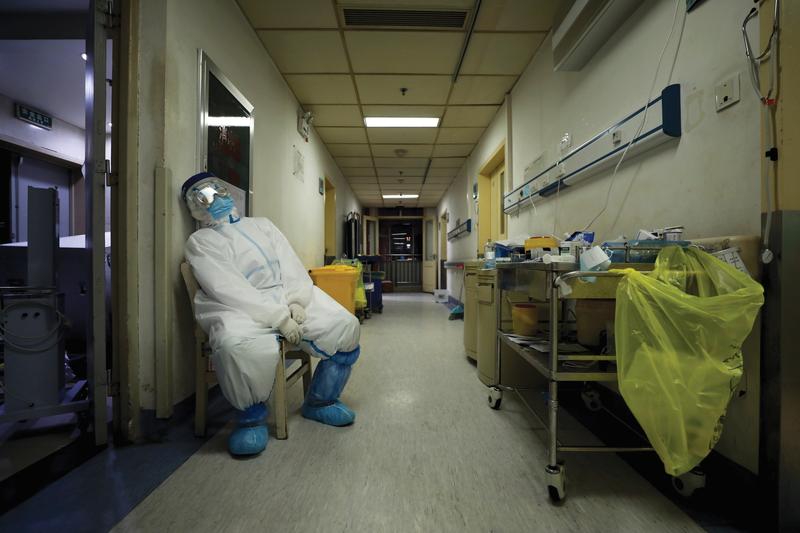 To handle stress, psychologists first help people identify their negative emotions, tell them to vent their feelings, and teach them how to relax. They have also suggested that some doctors and nurses stop working and have sufficient rest.

During the outbreak, psychologists are providing counseling for those who are stressed, prescribe them medicine and tell them how to breathe properly, relax their muscles and meditate.

Chen’s team has also used a type of physiotherapy called transcranial magnetic stimulation. During a 20- to 30-minute session, an electromagnetic coil is placed against the patient’s scalp, with magnetic fields used to stimulate nerve cells in the brain.

“It is still too early to determine the effectiveness of the therapy during this fight, but none of the patients showed discomfort during the sessions and they said they were willing to continue the treatment on a daily basis,” Chen said.

While struggling with their own stress, many doctors and nurses have been making every effort to help patients overcome their fear and anxiety.

In some cases, anxiety among patients has resulted in low levels of cooperation with treatment, especially when loved ones have been lost. 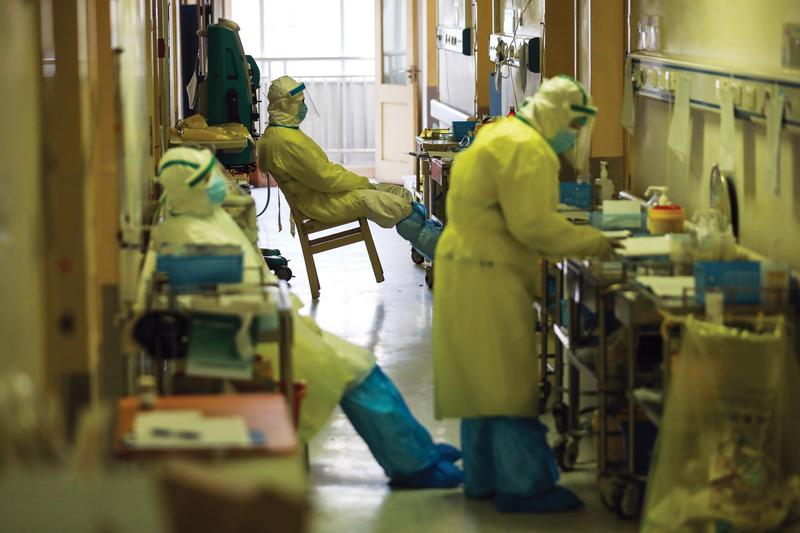 Jiang Jinhua, a 25-year-old nurse working at Wuhan City No 3 Hospital, said one elderly patient frequently refused to cooperate, even with eating and drinking.

“So, I often offered him words of encouragement, such as ‘the more you eat, the sooner you’ll recover and reunite with your family’ and ‘how about you finish the food first, and I’ll make a phone call to your daughter?’ Then, I make the call as promised,” said Jiang, who arrived in Wuhan from Shanghai No 4 People’s Hospital.

Feng, the psychologist, painted a colorful tree on a white wall at his hospital, where patients are encouraged to write down their wishes and blessings. He and his colleagues also set up a reading corner.

“Staying in such a closed environment, and being confronted by doctors and nurses dressed like ‘aliens’, patients can easily draw a line between themselves and medical workers. They feel isolated, insecure and frightened. We are trying to help them alleviate such feelings,” he said.

Feng begins his shift by touring the wards, taking particular notice of patients lying in bed staring at the ceiling, or those hiding under their quilts. He chats to them in an attempt to find the sources of their problems and help resolve them.

Feng also said one patient — an internet engineer in his 30s — has been working on his laptop in a ward every day.

“When I first talked with him, he didn’t turn to look at me. He explained that he meant no offense, but didn’t want to increase my risk of getting infected with the virus,” Feng said. 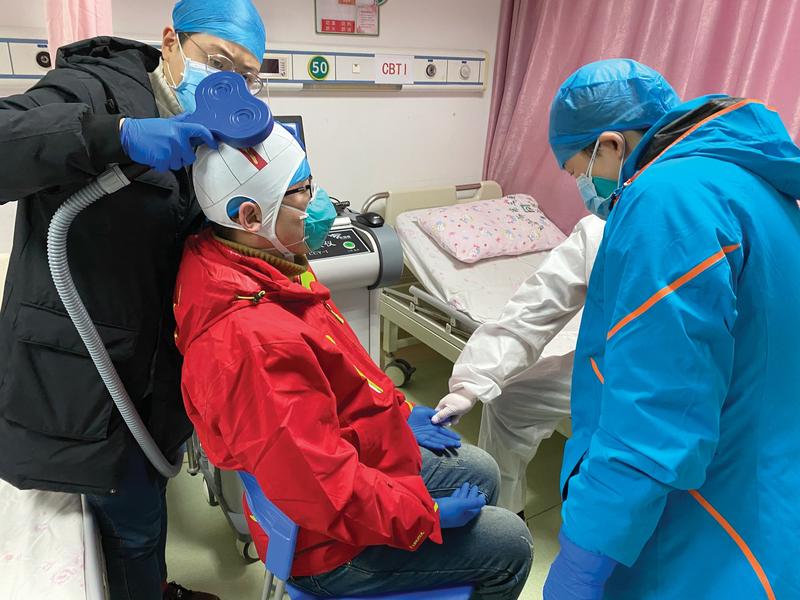 Early in March, the Shanghai Mental Health Center published the findings of the first large-scale national survey of the psychological impact of the outbreak on the nation’s population.

Some 35 percent of those who replied said they had experienced mental distress — with 5 percent of these respondents reporting that the level of this had been severe.

Researchers found that people in the 18-to-30 age bracket and those older than 60 had the highest level of psychological distress.

According to experts in the field, young adults use social media a great deal, where excessive information about the outbreak could easily trigger stress.

The survey was compiled from data collected between Jan 31 — the day the World Health Organization declared the novel coronavirus outbreak in China a Public Health Emergency of International Concern — and Feb 10.

It also found that migrant workers were more affected psychologically than others. 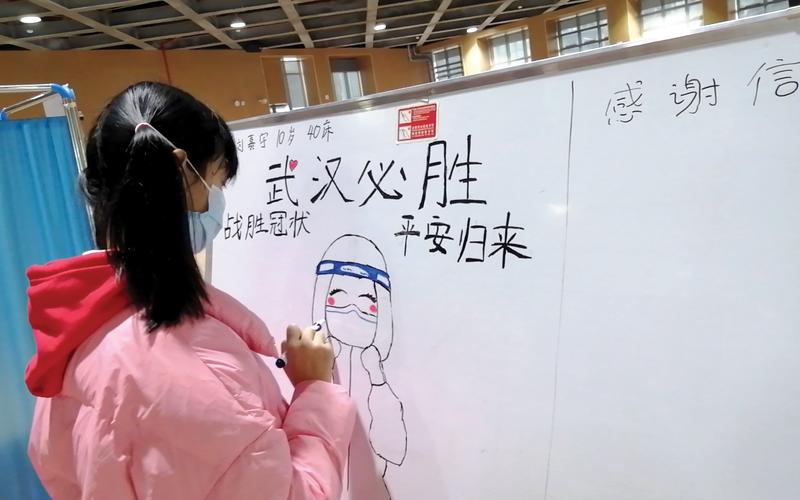 A 10-year-old patient draws on the notice board at a Wuhan hospital every day. (PHOTO PROVIDED TO CHINA DAILY)

Qiu Jianyin, who headed the research, said such workers are worried about delays in restarting employment, and possibly losing their jobs. They are also concerned about being exposed to the virus when they use public transportation to return to their jobs in big cities.

“In addition, they are worried about losing income, as they have to stay at home for 14 days on arrival in cities, and they are fretting over reduced job opportunities until there is a full resumption of work,” he said.

Some doctors and nurses have been working hard to bring a smile to their patients and to themselves.

Huang Jing, a nurse from Shanghai Huashan Hospital Affiliated with Fudan University, initially painted a pair of wings on the back of her protective suit every day as she worked at different hospitals in Wuhan.

“It gave me energy as I tended to patients’ various needs on a daily basis,” she said.

“I have also exercised in my hotel room every day, which has helped me get good sleep. If I do have difficulty in falling asleep occasionally, I start yoga meditation.

“We also have a professional team supporting us in efforts to prevent ourselves from becoming infected.”

Last month, Huang drew an image of Mickey Mouse on the back of her protective clothing — explaining to patients that she was born in the Year of the Rat.

“All the patients guessed that I’m 24 when they saw it, and that made my day,” she said with a laugh.