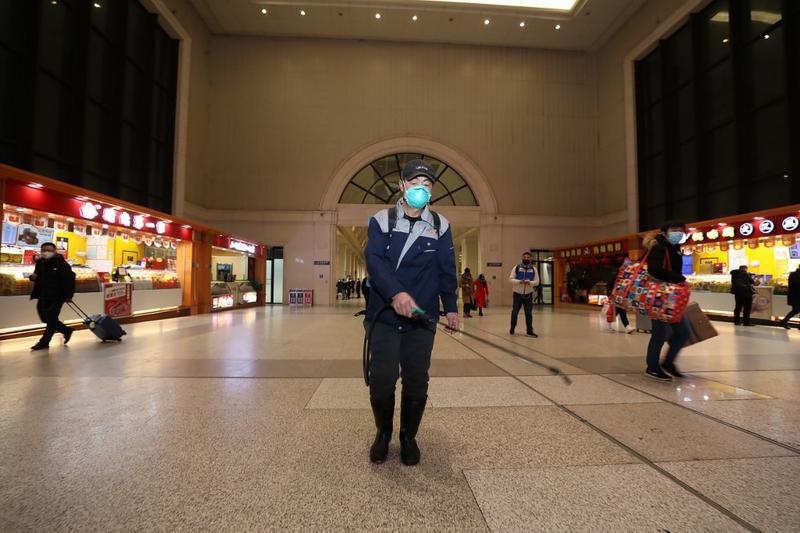 WUHAN – Central China's megacity of Wuhan battling with a pneumonia outbreak has suspended public transportation with other Hubei cities of Ezhou and Huanggang deciding to follow suit.

Wuhan has shut down airport and railway stations to outgoing passengers while asking citizens not to leave the city without special reasons.

The local government of Wuhan, the center of the coronavirus, announced that all public transportation in the city — local buses, long-distanced buses, subway and ferry — will be temporarily closed starting 10 am on Thursday.

City buses, subways, ferries and long-distance coaches, as well as flights and trains for outgoing passengers will be suspended starting from 10 am Thursday until further notice, according to a notice issued in the wee hours of Thursday by Wuhan's headquarters for the control and treatment of the pneumonia caused by the novel coronavirus.

The measures will be taken in a bid to "effectively cut off the virus spread, resolutely curb the outbreak and guarantee the people's health and safety," the notice reads.

The authorities have also asked all Wuhan residents to wear masks in public places.

"Staff of state organs, enterprises and institutions shall wear masks at work, and operators of public venues should set up eye-catching signs to remind and request residents to put on masks before entering," reads a notice issued by Wuhan municipal people's government.

"Those who disregard the warning will be punished according to relevant laws and regulations," it reads.

Wuhan's tourism authorities suspended on Wednesday group tours conducted through all local agencies from Jan 22 to Feb 8 and the municipal department of culture and tourism has ordered agencies to cancel all group tours planned after Jan 30. For trips before the date, travel agencies are required to issue refunds to all customers.

The pneumonia outbreak so far resulted in 17 deaths, all in Hubei province

The measures will be taken in a bid to "effectively cut off the virus spread, resolutely curb the outbreak and guarantee the people's health and safety," reads a notice.

According to the official website of Ezhou, all railway stations were shut down from 11:20 pm  on Thursday while the official website of Huanggang indicated that public transportation will be suspended from midnight Thursday with the suspension taking effect from Jan 24. People have been asked not to leave the city without special reasons. Cinemas, cyber cafes and other indoor entertainment venues have been asked to close for the time being. Authorities have decided to temporarily close the Central Market of Huangzhou district.

Huanggang authorities will also scan highway entry and exit points, ensuring that people leaving and arriving at the city are not running a temperature.

This screenshot taken from the official website of the Ezhou municipal government shows a notice announcing railway stations of the city will suspend operation from 11:20 pm on Jan 23. 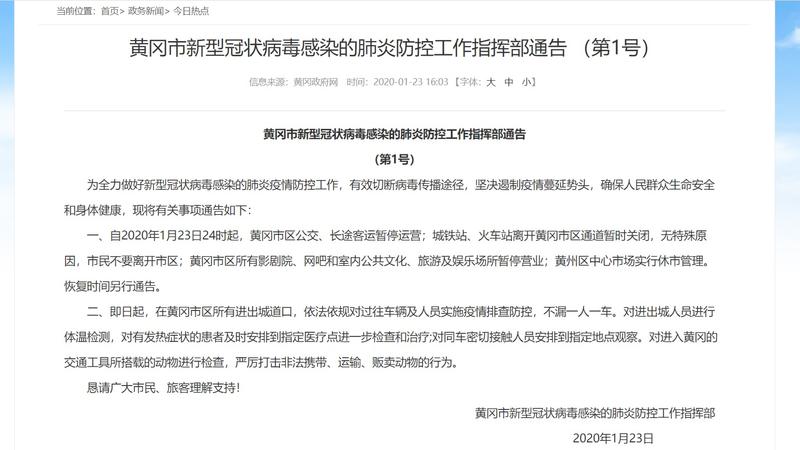 This screenshot taken from the official website of Huanggang municipal government shows a notice announcing a lockdown of the city from Wednesday midnight.

Chinese health authorities announced Thursday that 571 confirmed cases of pneumonia caused by the novel coronavirus (2019-nCoV) had been reported across 25 provincial-level regions in the country by the end of Wednesday.

Among the confirmed cases, 399 patients are receiving treatment in hospitals, with 71 in severe condition and 24 in critical condition, said Yang Yunyan, deputy governor of the province, at a local press conference. The pneumonia outbreak so far resulted in 17 deaths, all in Hubei province.

Confirmed cases have also been reported in the regions of Hong Kong, Macao, Taiwan, as well as in the United States, Japan, the Republic of Korea and Thailand.