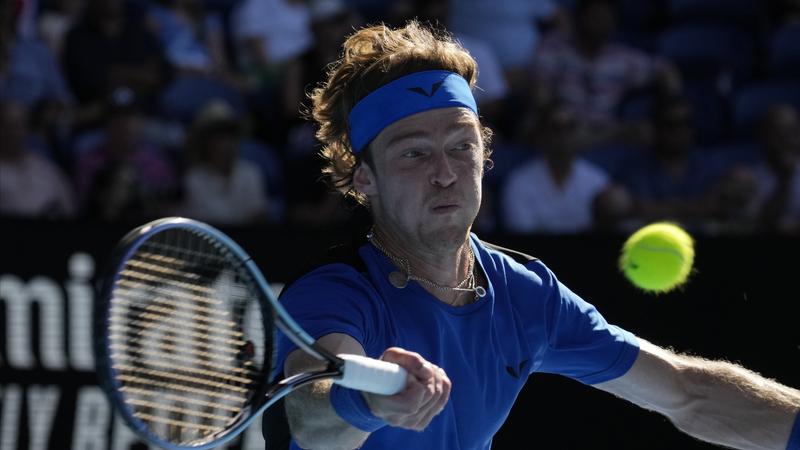 Andrey Rublev of Russia plays a forehand return to Holger Rune of Denmark during their fourth round match at the Australian Open tennis championship in Melbourne, Australia, on Jan 23, 2023. (PHOTO / AP)

Novak Djokovic remains on track for his 10th Australian Open crown after returning to his imperious best and although Andrey Rublev is not looking forward to Wednesday's quarter-final clash, he is still hoping to stop the Serbian's title charge.

In a moment of disarming honesty after his five-set win over Holger Rune, Rublev conceded he was not relishing the opportunity to face 21-times Grand Slam champion Djokovic on his favourite court.

No one wants to face Novak... I prefer to be in any other part of the draw – but not Novak.

"No one wants to face Novak," Rublev blurted out with a laugh on Rod Laver Arena, albeit prematurely as Djokovic had yet to play his own fourth-round match. "I prefer to be in any other part of the draw – but not Novak."

Rublev's alarm was probably justified later when Djokovic steamrolled home favourite Alex de Minaur 6-2 6-1 6-2 to earn his 38th straight win on Australian soil. He has not lost at Melbourne Park since the fourth round in 2018.

By contrast, fifth seed Rublev pipped Rune courtesy of a net cord on match point, having rallied from the brink before securing a 6-3 3-6 6-3 4-6 7-6 (11-9) win. He acknowledged that luck would not cut it against Djokovic.

"The only chance I have is if I play my best tennis, just fight for every ball, and that's it. That's the only chance," Rublev told reporters later.

Djokovic has been thriving on his return to Melbourne, a year after his shock deportation, and appears to have overcome the hamstring injury that looked the biggest hurdle in his quest for a record-equalling 22nd Grand Slam title.

"Incredible firepower, especially from the serve and forehand corner. Just a very explosive player – little bit like De Minaur, so hopefully the result will be the same."

The other men's match on Wednesday features unseeded Americans Ben Shelton and Tommy Paul, with both reaching their first Grand Slam quarter-final to continue the success of the US men this year.

The surprise matchup between Shelton, 20, and Paul, 25, will be the first Slam quarter-final between two American men since 2007, when Andy Roddick beat Mardy Fish in the Australian Open, and will assure the US of its first men's semi-finalist in Melbourne since Roddick in 2009.

There is also a fresh face in the women's draw, with Poland's Magda Linette playing in her first major quarter-final aged 30 and taking on former world number one Karolina Pliskova.

Fifth seed Aryna Sabalenka has yet to drop a set in 2023 and will aim to reach her first Australian Open semi-final when she faces unseeded Croatian Donna Vekic.