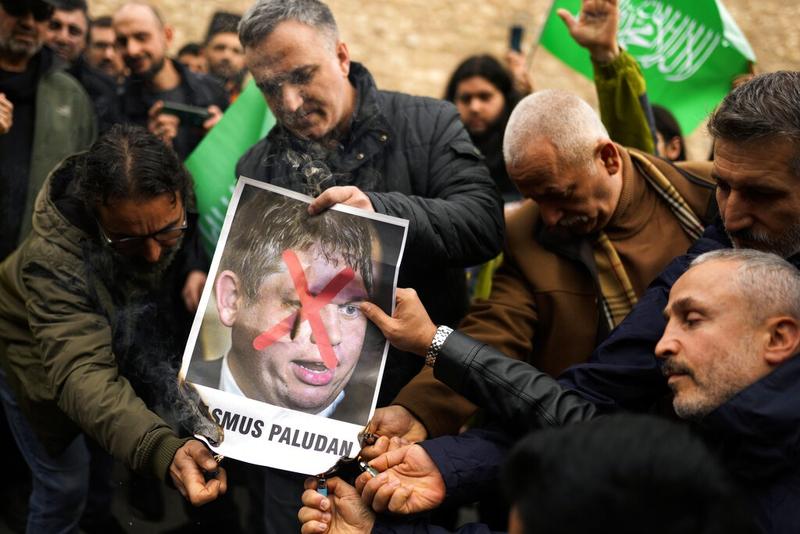 People set on fire a photograph of far-right activist Rasmus Paludan during a protest outside the Swedish consulate in Istanbul, Türkiye, on Jan 22, 2023. (FRANCISCO SECO / AP)

ANKARA - Türkiye has postponed a trilateral meeting with Sweden and Finland on their NATO bids following the burning of a copy of the Quran in Sweden, the state-run TRT network reported on Tuesday.

The meeting was slated to take place in February, according to the report, citing anonymous Turkish diplomatic sources.

The decision came a day after Turkish President Recep Tayyip Erdogan told Sweden not to expect Türkiye's support on its NATO bid after Rasmus Paludan, the head of the Danish far-right political party Hard Line, burned a copy of the Quran on Saturday outside the Turkish Embassy in Stockholm, Sweden.

"Those who allow such disgraceful acts in front of the Turkish Embassy in Stockholm can't expect good news from us on NATO membership," Erdogan said, adding that no individual has the freedom to insult the faith of Muslims or other religions.

Rasmus Paludan, the head of the Danish far-right political party Hard Line, burned a copy of the Quran on Saturday outside the Turkish Embassy in Stockholm, Sweden

Sweden and Finland submitted their formal requests to join the NATO in May 2022, which were initially objected by Türkiye, a NATO member, citing their support for anti-Turkish Kurdish organizations and political dissidents.

A month later, Türkiye, Sweden and Finland reached a memorandum of understanding ahead of the NATO summit held in Madrid, Spain.

In the MoU, Ankara agreed to lift its veto on the NATO bids by Finland and Sweden, which in return pledged to support Türkiye's fight against terrorism and address its "pending deportation or extradition requests of terror suspects expeditiously and thoroughly."

Earlier this month, supporters of PKK and YPG hung Erdogan's effigy by the feet in Stockholm and shared its video footage on social media affiliated with the PKK, the semi-official Anadolu Agency reported. Türkiye's Foreign Ministry later condemned this "heinous act" and summoned Sweden's ambassador.

The Turkish parliament has not ratified the Nordic countries' NATO bids so far, citing that they have yet to meet Türkiye's requests.

On Tuesday, Finland's Foreign Minister Pekka Haavisto said that his country might have to reconsider promoting a joint, simultaneous entry of Finland and Sweden into NATO if Sweden's application is delayed much longer.